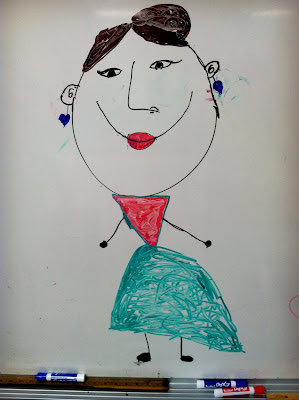 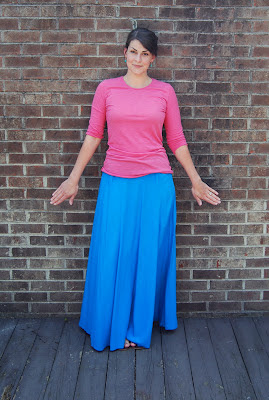 This post is to distract you from the fact that I have not been sewing.  Life is busy right now. Super duper busy.  As it is for everyone, I'm sure.  Work is jam-packed with all the craziness that happens at the end of the school year.  It's fun, but I'm looking forward to the beginning of summer sew-cation- er, I mean vacation.

My outfit today was inspired by a drawing of moi a student left on my whiteboard the other day.  I took a photo because I though the likeness was pretty spot on. I should start posting some of the drawings kids do of me.  The other day I received a portrait where I looked like I had a beard.  I was looking closely in the mirror later on...

The top is old me made.  A quick and dirty version of the Burda long sleeve tee pattern I so love to use.  I've been doing a pretty crappy job of documenting Me Made May though I have been wearing me made every day.  The skirt was purchased.  In fact, it's the first big ticket item I've purchased in a while.  I did a mental dance over whether or not I should buy it, but eventually I caved.  I, of course, instantly thought I could make that when I saw it.  But the chances of finding electric blue rayon for cheap and having time to sew an eight gore maxi are pretty slim these days.  I bought a size too big- that was all they had left at the store- and altered it to fit with four darts at the outermost gore seams, front and back.  So there was a little bit of sewing involved.  Anyway, I'm rambling...

And now, to distract you even more, I'm posting a few photos of some spectacular sculptures I put on display at my school the other day.  I had to share.  They are just too awesome.  These are all done by fifth grade students.  First, I taught a lesson on figure drawing.  We spent a couple of days sketching classmates as they posed; stick figures, gesture drawings (we called them tornado figures) and contour line drawings.  Then we moved on to clay figures.  They constructed the figure using several clay techniques we'd learned in the past.  The figures had to be reclining.  They are hilarious.  Some of them have so much personality. 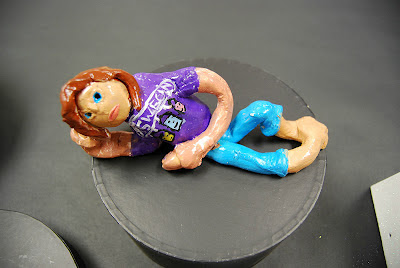 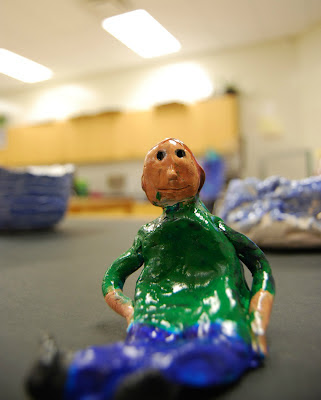 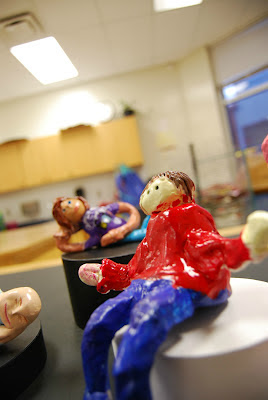 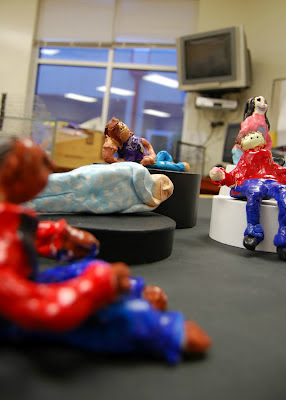 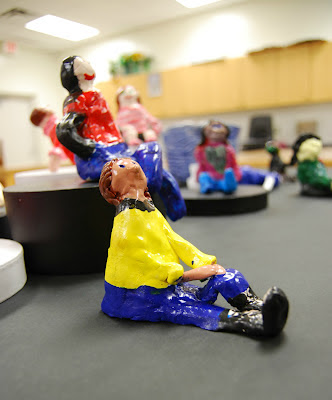 Those are some crazy detailed Converse high tops. 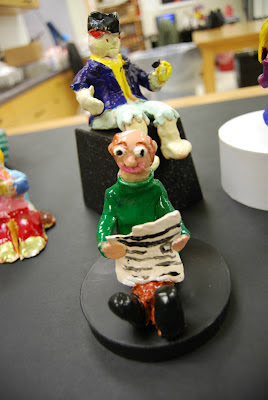 "May I borrow ye paper when yer through thar, matey!" 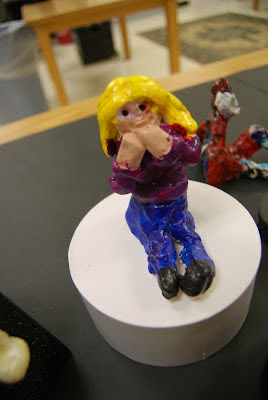 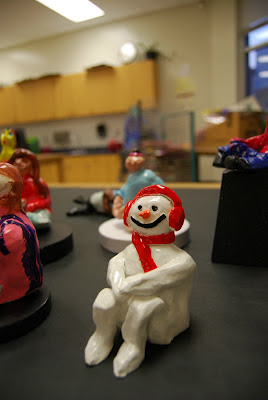 Not entirely sure how the snowman came about. But I love his earmuffs.

And one more thing education related since this seems to be the theme of this post...

I have been completely engrossed, fascinated and inspired while reading Seth Godin's manifesto Stop Stealing Dreams.  If you are at all interested in public school reform, I highly recommend checking it out.

Wishing everyone a fabulous week with lots of time to sew!