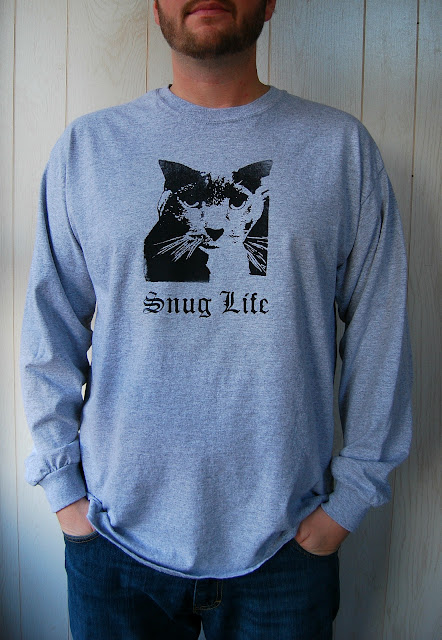 Yes, my husband is not ashamed to wear a picture of his cat on his shirt.  A very literal version of wearing your heart on your sleeve I suppose.  Tee hee.  Love you, J.

J had a birthday last week.  For his birthday gift, I finally got around to making a tee shirt that we had talked about making for years.  The idea for this tee shirt was born while we were on our honeymoon three years ago.  While walking around Old San Juan, we went in to a tee shirt shop where they had a pug life tee shirt on display.  We thought it would be hilarious to make a snug life tee shirt instead. 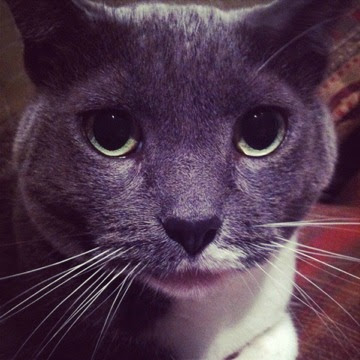 See, we have this cat.  A cat named Socks who loves to snuggle.  I mean SNUGGLE.   I'll be honest, I've never seen anything like it.  Neither has J.  Socks will snuggle morning, noon and night.  I wake up in the middle of the night and he will be flopped on his back with his head on my shoulder.  He snuggles like a person.  He snuggles so much that sometimes it's really annoying and you have to push him off.  But you can't be mad at him for too long.  I mean, how many cats do you know that are so loving?  Our other cat is pretty indifferent to us. 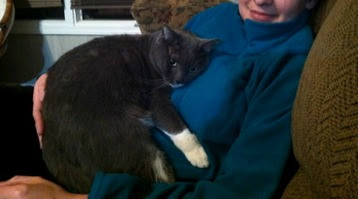 I went though our photo roll and found lots of snuggle pictures, but some are just too embarrassing to post.  But here's one.  Socks' story is a funny one.  I was not a cat person before Socks.  In fact, I often claimed I hated cats.  Then my aunt asked me to cat sit for a year while she was doing humanitarian work in Africa.  That's when I got Socks.  He was a born in the gutter stray that she took in.  J and I laugh about he would never have made it out on the streets with his proclivity for warm places and snuggle.  He's too much of a wimp.   Anyway, he snuggled his way in to our home. When my aunt came back from Africa, I couldn't let him go and she was kind enough to let me keep him.  And now I can't believe I ever said I didn't like cats. 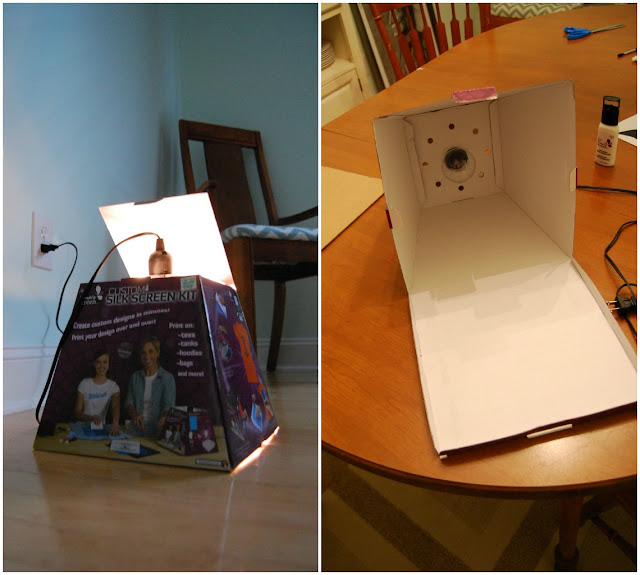 Back to the tee shirt.  I wanted to try out a photo screen printing kit I saw at Hobby Lobby by Plaid.  It was quite pricey ($40), but I used a 40% coupon which made it more reasonable.  Still a little pricey for my tastes.  I was not totally convinced it would work when I started this project.  I did some photo silk screening back in college and I remember needing a lot of sophisticated equipment.  We put photo emulsion on the screens in a dark room and used a huge glass light table to expose the screens. But this little kit does the same thing on a smaller scale.  It came with three small screens that already had photo emulsion on them in a black bag, a box with a socket and light bulb to be used for exposing the screen, and supplies to actually print your image after you make your screen. 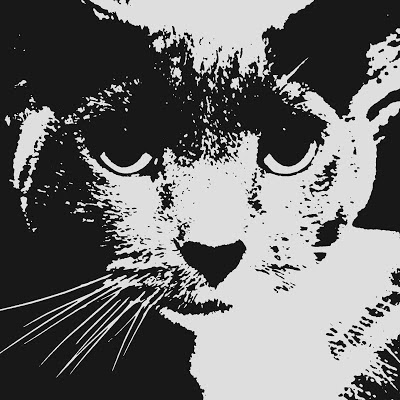 All you have to do is print out the black and white image you want to use.  I used the photo of Socks above but altered it in PicMonkey to be only black and white.  In case you are wondering, I made it black and white first, played around with the brightness and contrast and then "posterized" it to only have two colors-  just black and white.  No grey.  I did add to the image since we wanted to see the top of his ears and whiskers on the other side of his face.  I worked back in to the image with a sharpie and then photocopied it.  I just used regular paper, not a transparency.  I laid my printed image face down on my screen and laid a piece of glass on top and then exposed it in the light box.  I did not use a piece of glass the first time I tried it and my image was not as successful.  The heat from the light bulb caused the paper to curl up even though I taped it down and missed a lot of detail.  So I highly recommend using a piece of glass on top.  I took a piece of glass out of a picture frame to use. 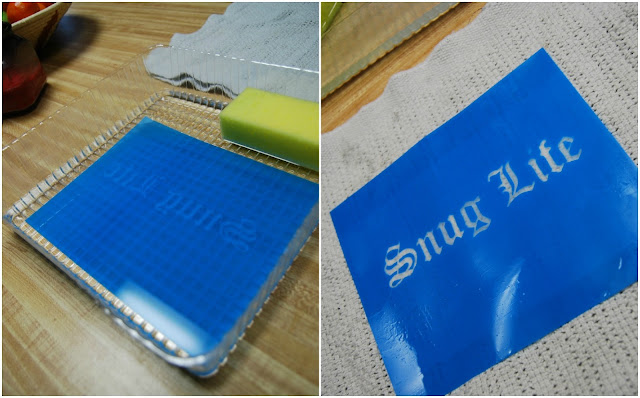 After exposing the screen for 25 minutes, I soaked it and removed the emulsion to form the image.  The emulsion that is exposed to light stays put and the emulsion beneath the black image is washed away.   I had to put the text on a separate screen because we wanted the image to be as big as possible. 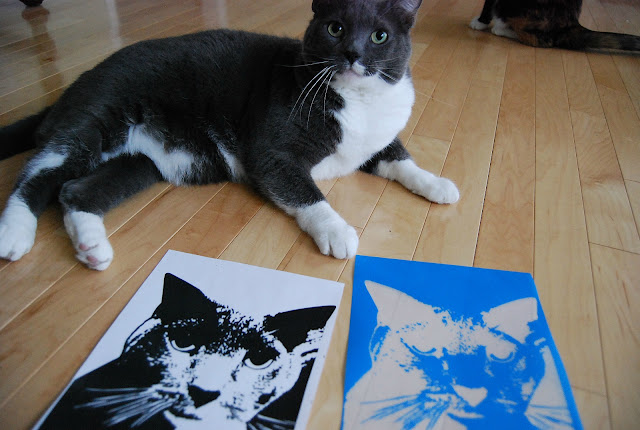 Once the screen was dry I was ready to print.   My image was way too close to the edges but I attached a wide masking tape border before I printed.  That kept me from spilling ink over the edge of the screen.  The size of the screens was a bit of an issue.  I needed them to be just a little bit bigger. 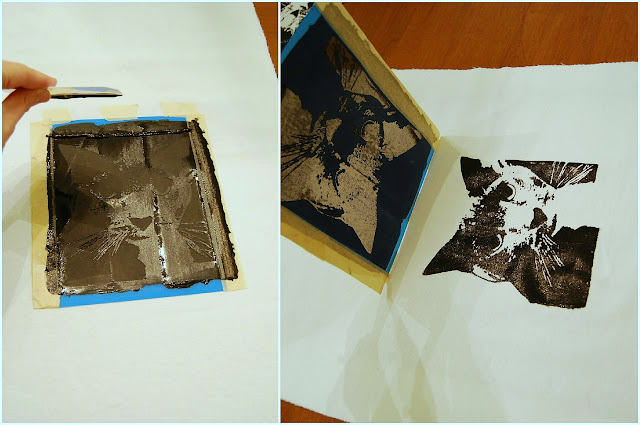 I did a few practice prints before I printed J's tee shirt. I actually printed two tee shirts for him; a white ink on black tee and a black ink on gray tee.  I like the black image better.  The white ink soaked in to the tee shirt and looked very faded, which is ok.  I may make him one more.  You can wash the screen and use it again.  You can see below that the image is pretty close to the original print out.  There were some minute details lost but it's pretty darn close.  My only complaint is that the photo emulsion does not seem like it will last very long.  The edges feel pretty gummy and the more times I washed it, the more I felt like the edges would peel up.  I don't see it lasting for 50 prints like the instructions claim.  But it was great for making a few tees. 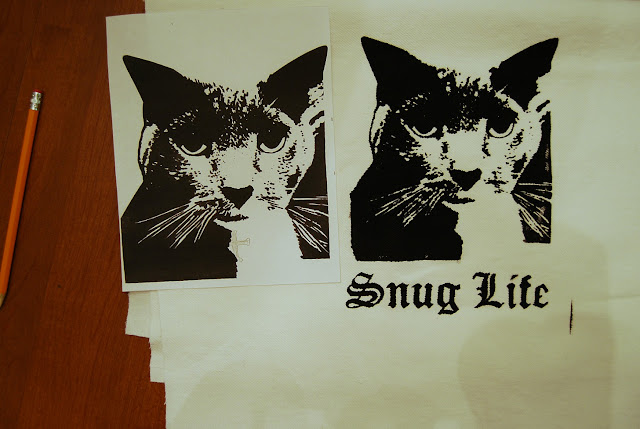 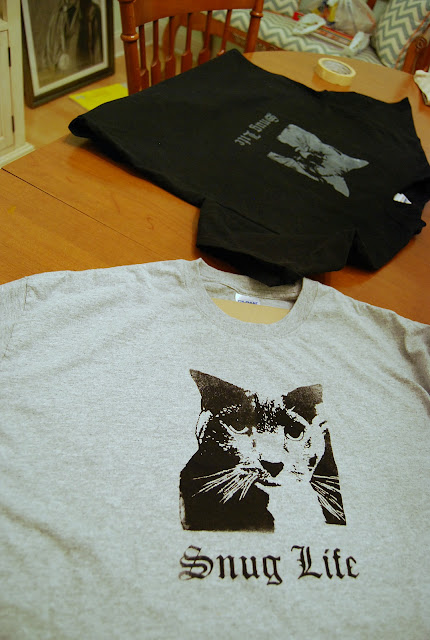 The verdict on Plaid's Custom Silk Screening Kit?  Fun and good for a printing a few small scale images.   But pretty expensive.  I wouldn't have bought it without the coupon.  You can also buy replacement screens but they are pricey, too.  Good thing Hobby Lobby lets you use a 40% coupon everyday if you like.   And no, I didn't receive any free stuff or compensation for this post which is why I'm not linking to the product.  You can look it up online if you are interested.  Just my honest opinions. 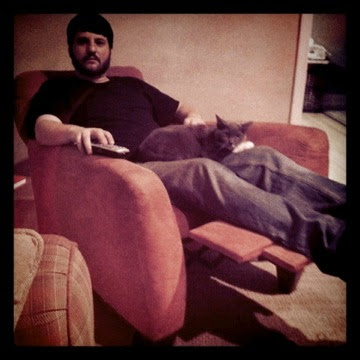 He's going to kill me for posting this photo, bwahahaha!
J likes his tee shirt and that's all that really matters.
Happy Birthday to a man who is not ashamed to snuggle with his cat!