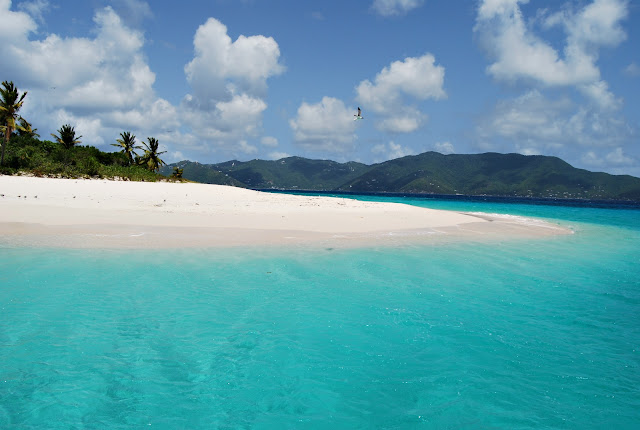 Sandy Cay, BVI's.  The colors in this photo have not been edited at all.  That is actually the color of the water in the Virgin Islands!

This is a gratuitous vacation post, just in case you're only interested in the sewing posts.  Though there were lots of handmade things worn in St. John.  I went in to a sewing frenzy before we left.  I think I sewed a grand total of six different items for our trip in the last two weeks before we left.  To tell you the truth, I was a little drained by the time I was done.  I was frantically finishing a dress late at night before the morning we left at four a.m.  Anyway, I'll post about the things I made later on.  This is just a summary of what we did, what we saw...  mostly for me to look back on more than anything else.

And yes, maybe to be a little bratty, too ;)  It sure was a beautiful place. 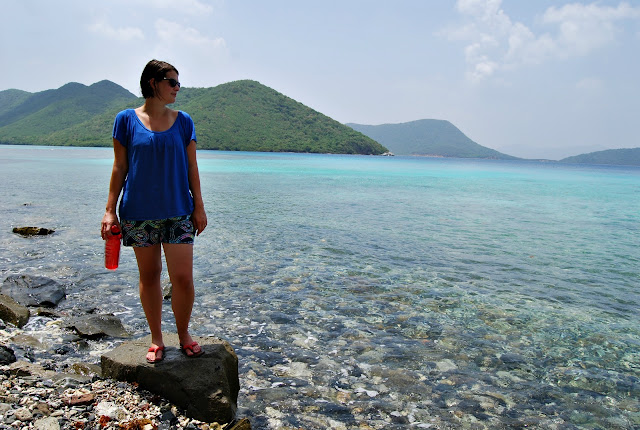 After snorkeling around Waterlemon.

The shorts came in handy!  I wore both pairs multiple times.  They were great for all the beach going and hiking around we did.   We did so much walking, swimming and snorkeling everyday that we were worn out at night.  I think we went to bed around nine every night. 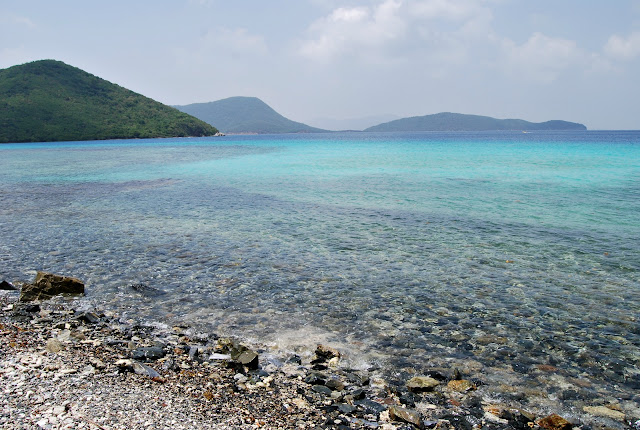 One more time, Waterlemon.  The water here was absolutely insane. Again, not edited.

We rented snorkel gear the first day we were there and took it everywhere we went.   You could just walk in to the water, put on your mask and go.  The snorkeling was amazing.  I've never seen anything like it.  The first day we were there, we went to Maho Bay.  J was in the water for five minutes and popped up screaming, "Turtle!"  I'm sure we didn't look dorky at all.  We followed about five or six sea turtles as they leisurely munched on the sea floor for the next hour.  It was pretty amazing. 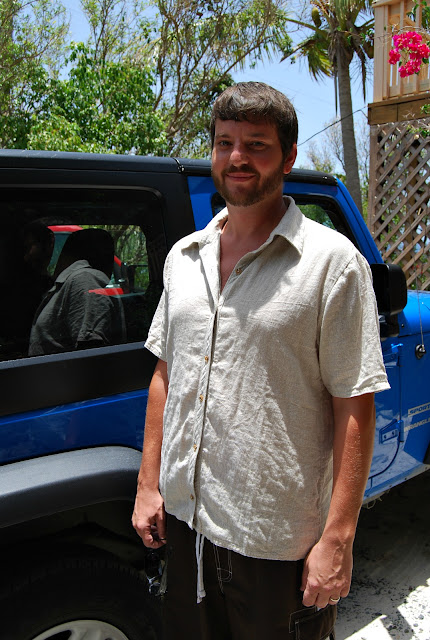 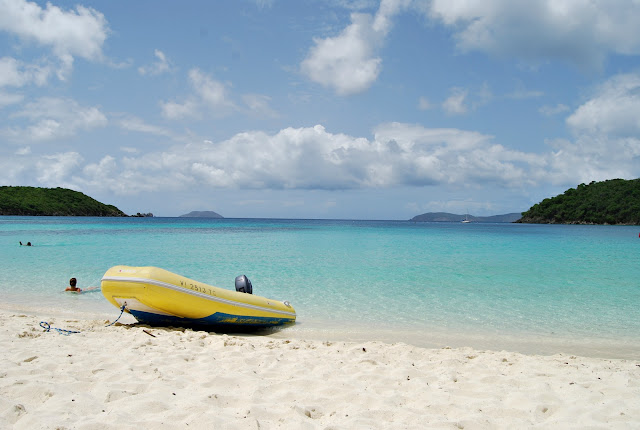 All the beaches on St. John are public.  We rented a Jeep for the week and traveled around the island going to a different beach or two everyday.  They were all beautiful.  I'd have to say they are some of the most beautiful beaches in the world.  We went to Maho, Waterlemon, Salt Pond, Hawksnest, Trunk Bay, and Jumbie.  I'm absolutely spoiled rotten now. 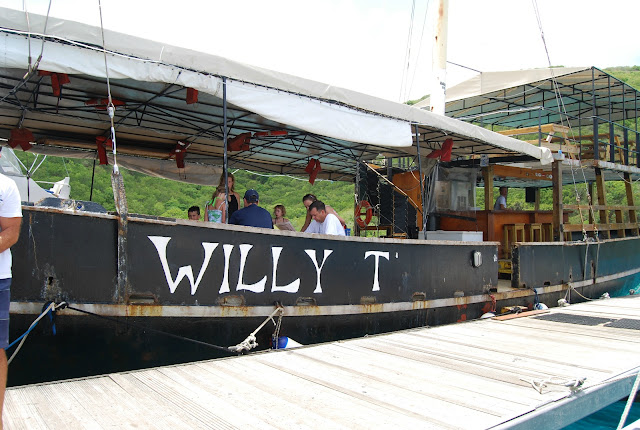 The last day we were there, we chartered a boat and trolled around the British Virgin Islands.  We stopped for lunch at Willy T's.  It's a boat in the middle of the ocean that serves as a bar/restaurant.  And the food was really good!  So were the drinks. 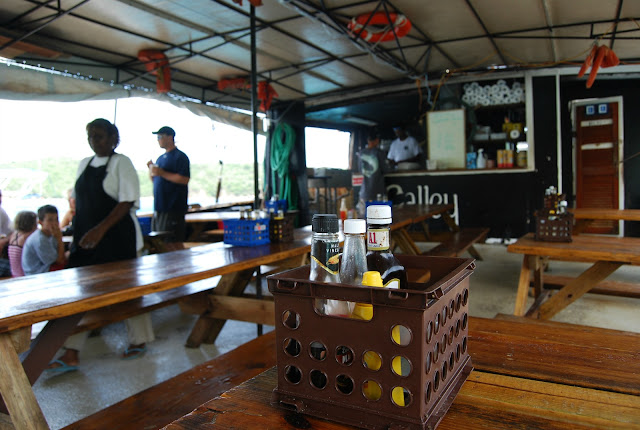 In addition to Willy T's, we snorkeled at the caves at Norman, stopped at Sandy Cay and swam up to The Soggy Dollar Bar on Jost Van Dyke. 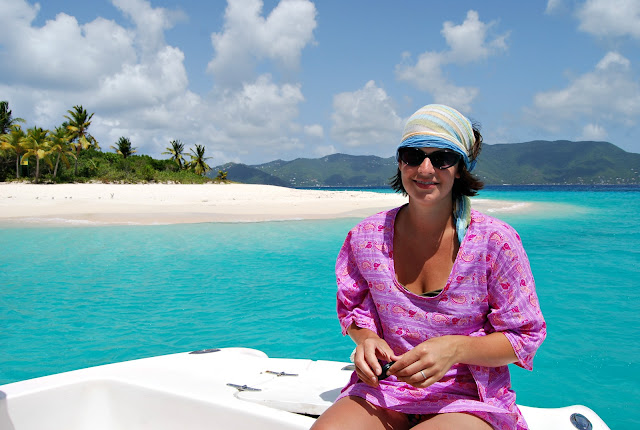 My best pirate impersonation.  And I made that cover up-- to be blogged soon.

The boat trip was probably my favorite part of the trip.  Actually, I don't know if I can pick just one favorite part.  It was all pretty awesome.  If you ever have a chance to make it to St. John, do it.  It was absolutely unreal.  We had such a great time. 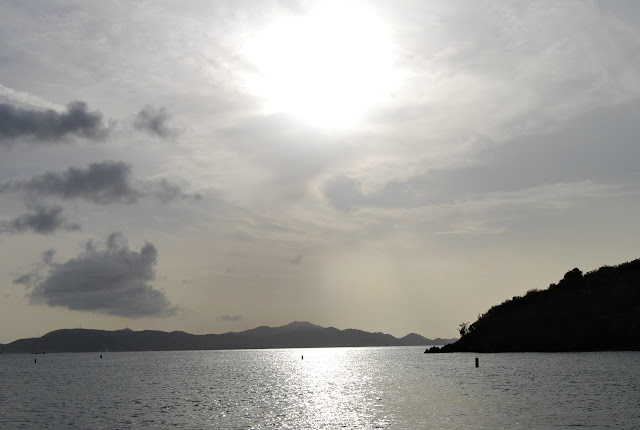 Until next time, St. John!