A Bunch of Knits 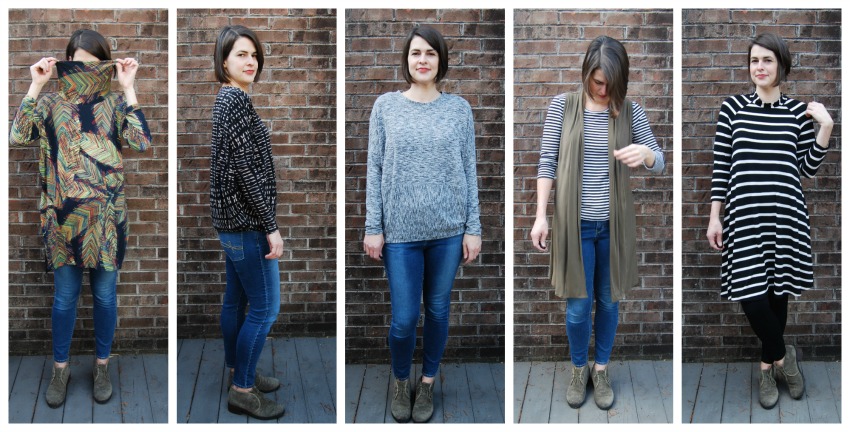 I didn't realize at the time that all the things I made in the last month and a half coordinate so well.  I can't say I planned that, though.  I guess I know what I like when it comes to choosing fabric!  I've made a bunch of easy knit things since Christmas.  I seem to go through phases in my sewing where I just want to beef up my wardrobe fast.  And that's what I did.  Easy, knit tops are almost like instant gratification when it comes to sewing projects.  Anyway, I decided just to put all these quick sews in one blog post and write a brief pattern review of each.  Hopefully it's not too massive of a blog post to read.

First up is this funky tunic.  I used a Nicole Miller knit I bought from Joann's last winter.  I got a gift card for Christmas last year to Joann's so I ordered online instead of buying in store.  I had no idea the feather print on this fabric was so big when I ordered it.  It wasn't going to work for what I originally planned, so it sat in my stash.  I didn't really love the color scheme either when I saw it in real life.  There is a lot of green and yellow.  But now that I've made this top, I'm really liking it.  This is just another iteration of Simplicity 1071, which I have made too many times to count now.  It's a super easy, boxy top with a great neckline.  I highly, highly recommend the pattern if you are looking for a top like this.  On this version, I added a cowl (from another pattern I can't remember right now) and lengthened it about ten inches.  I also did extra deep side slits.  I've worn it over jeans like this and over leggings.  The back is slightly longer than the front. 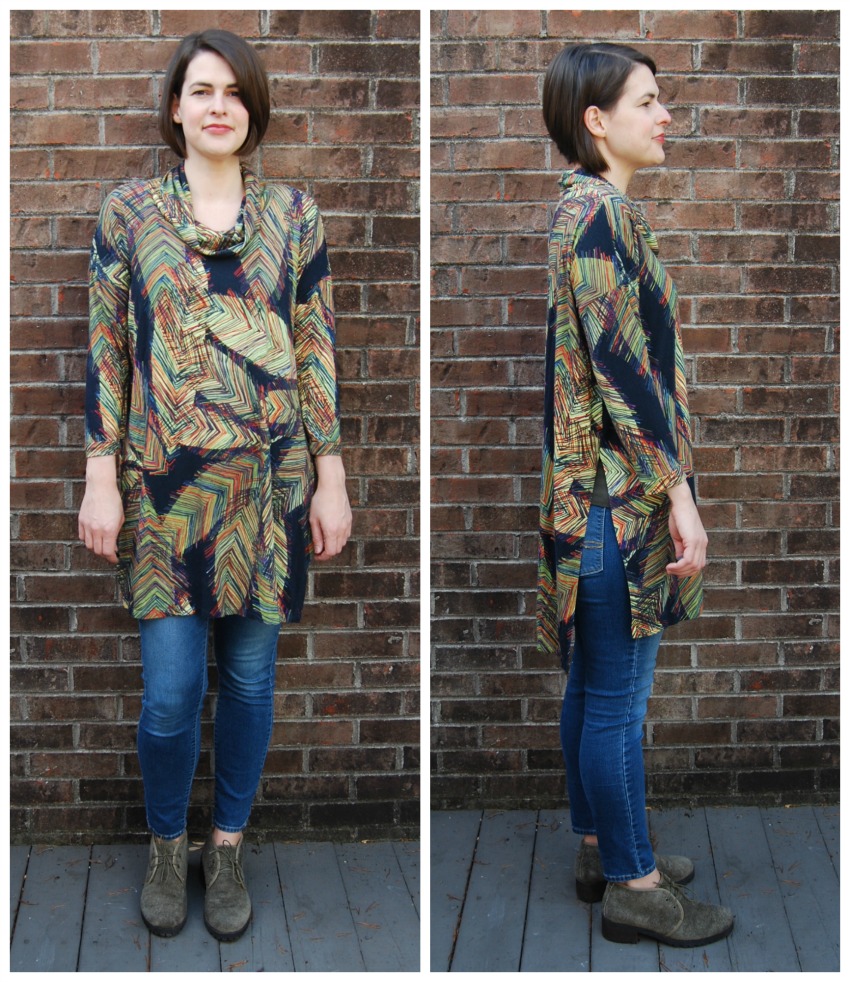 Next are two StyleArc Sunny tops.  I love this pattern.  The top has a cocoon shape, wider through the middle, and nice slim sleeves.  I made the grey version first from a sweater knit I found at Joann's.  Wish I had more of this fabric.  It's nice snuggly stuff.  I went back for more but it was all gone. 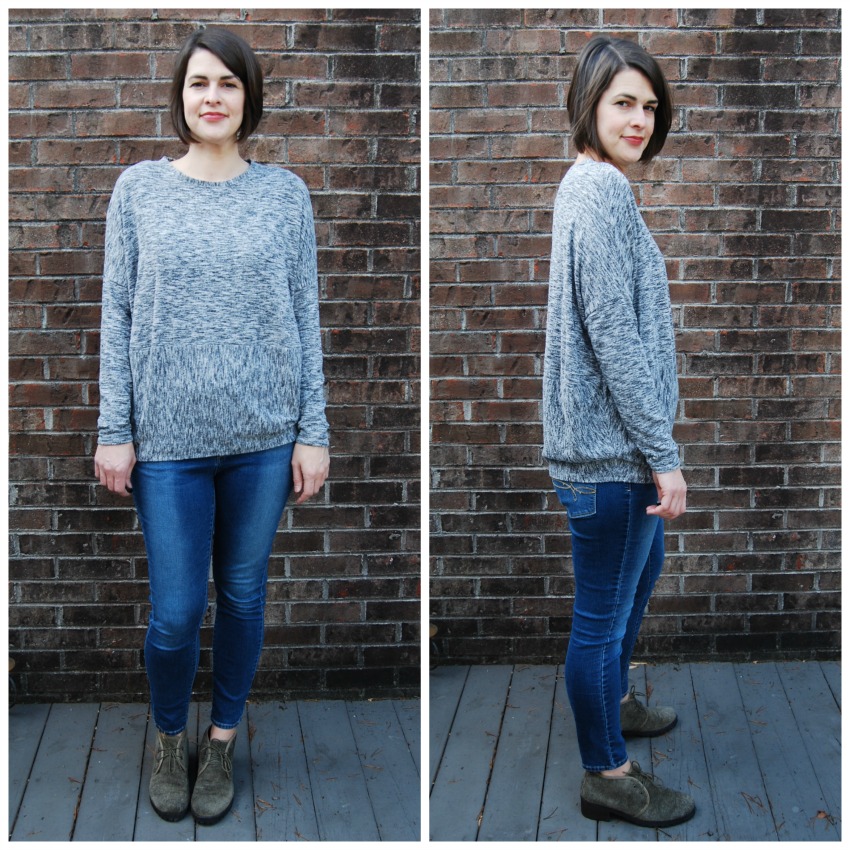 I've only sewn two StyleArc patterns so far, but I've liked them both.  The instructions are minimal but that's okay for a top like this.  I screwed up the neck band on the grey version.  I really should have pulled it tighter.  There was no way to unpick with the plush sweater knit, though.  So I left it as is.   It bothers me in these photos but doesn't bother me at all when I wear it. 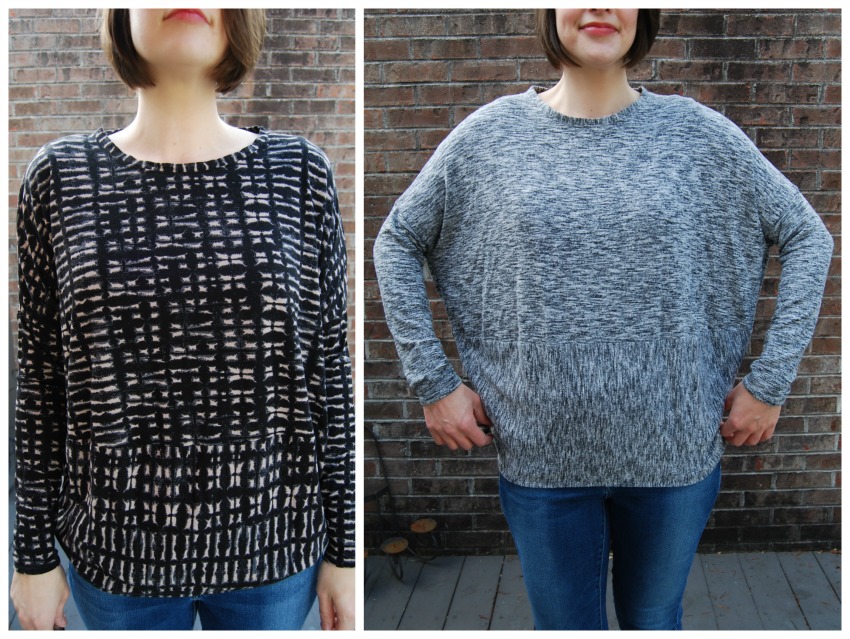 On the second printed version, I did a better job on the neck band.  I also cut the neckline about 3/8" deeper.  I like the way the neckline sits on the second version better.   Version number two is another Nicole Miller knit from Joann's.  Man, I've bought a lot of fabric from Joann's lately.  It's all I've got where I live. Both are great tops and I have worn them both constantly since I made them.  On both versions, I switched the print direction on the bottom half of the top- just because. 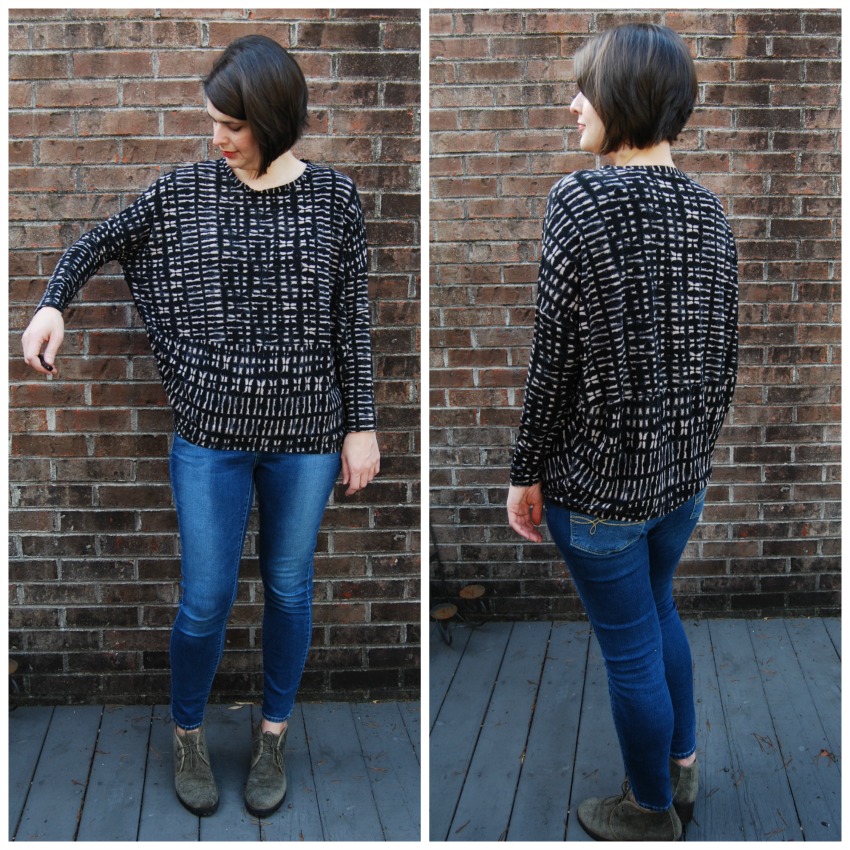 Next I made this long swingy vest thingy from a drape-y cardigan pattern, McCalls 6844.  I used a drab green bamboo knit from fabric.com.  I love those bamboo knits- so soft and such great drape.  I know this particular McCalls pattern has been a very popular.  I picked this pattern up at a recent pattern sale strictly with the intention of making a vest like this.  I wanted something long and swishy I could wear over long sleeve tops and dresses.  I had something specific in mind when I made this but I'm not sure I hit the mark just right.  I added about ten (?) inches or so to view A, split between two of lenthen/shorten lines on the pattern.  The pattern variations all include sleeves but I figured it would be an easy alteration to just bind the armholes and make it a vest. 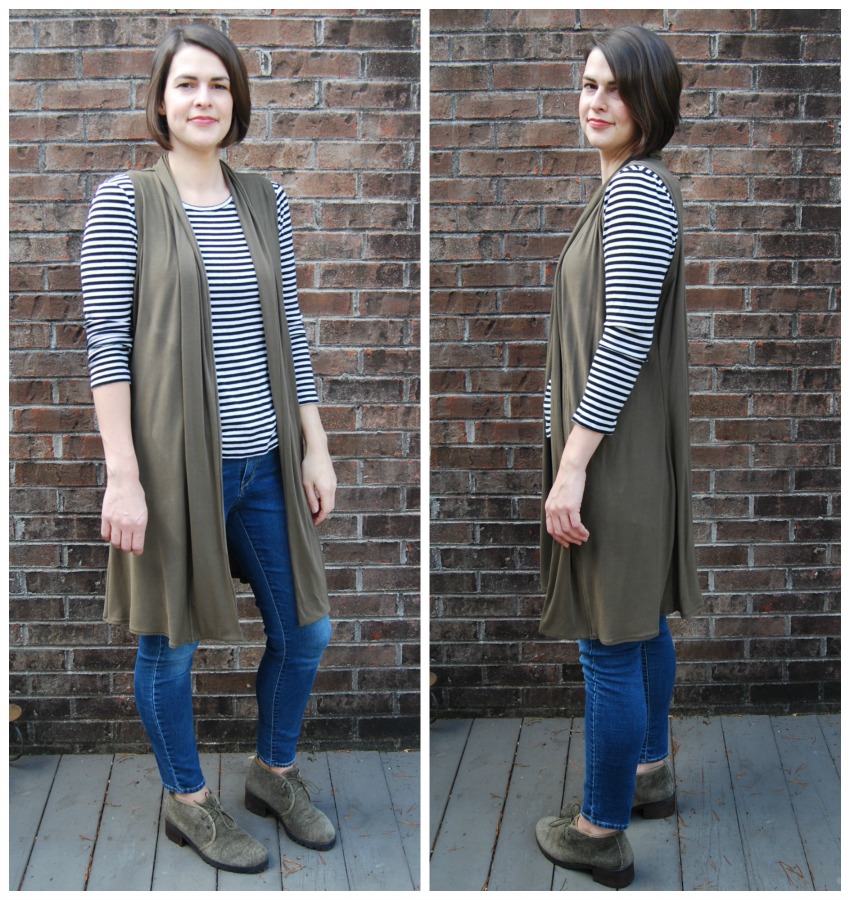 Well, it didn't exactly work out that way.  My armholes are much deeper than the original pattern.  I did a binding first and hated the way it drooped and stuck out.  Instead of unpicking, I just cut off the binding and sewed bands instead.  I figured a deep armhole wouldn't matter on a vest anyway.  All in all, it's just ok.  I like it but I haven't worn it out in public yet. I'm actually thinking I might wear this more when it's warmer over sleeveless things.  We'll see. 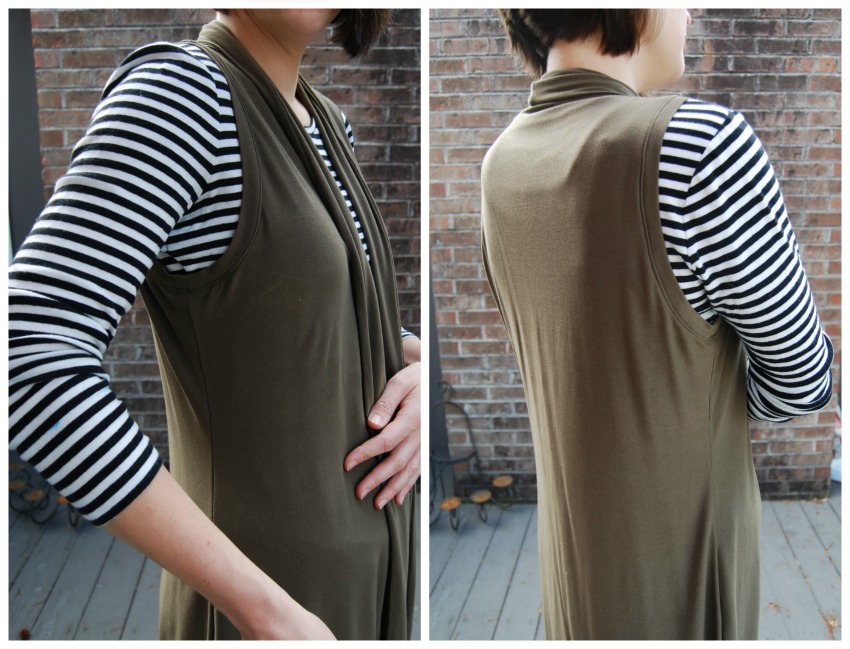 And last but not least, a swingy trapeze dress.  I used New Look 6469.  The pattern has a raglan sleeve, a high neckline and tons of tent-y swish.  I wasn't sure I was going to like a dress like this but figured I'd try it on a whim.  I bought the pattern and the fabric at the same time (Joann's again, ha!). 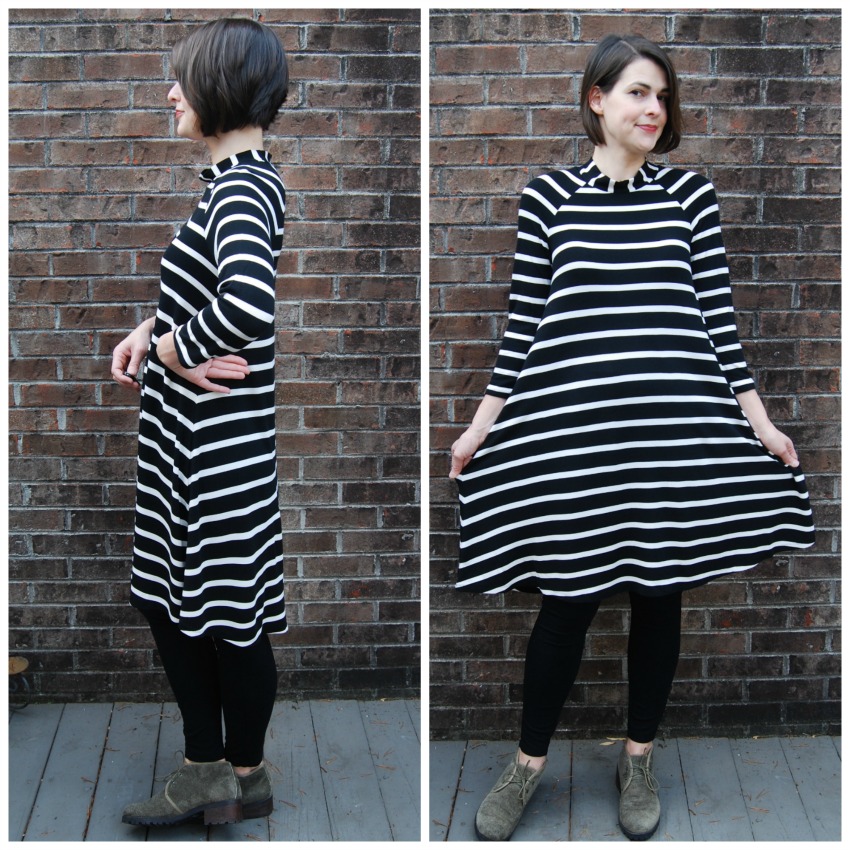 Why I chose a stripe, I have no idea.  I really tried to match up those stripes at the raglan seams.  If you notice, the stripe right at the bottom of the armhole matches (where the notch was), but that's it.  I should have matched a stripe higher up.  Both sides look similarly mismatched, so I left it.  And I didn't have any more fabric anyway.  I actually had to piece the neck band.  My side seams match beautifully, however.  I sewed a size S, which was crazy.  I was feeling adventurous with my weight loss.  It fits because it's so swing-y, but it's definitely tight through the shoulder.  The knit I used is pretty tough and beefy, though, so it works. 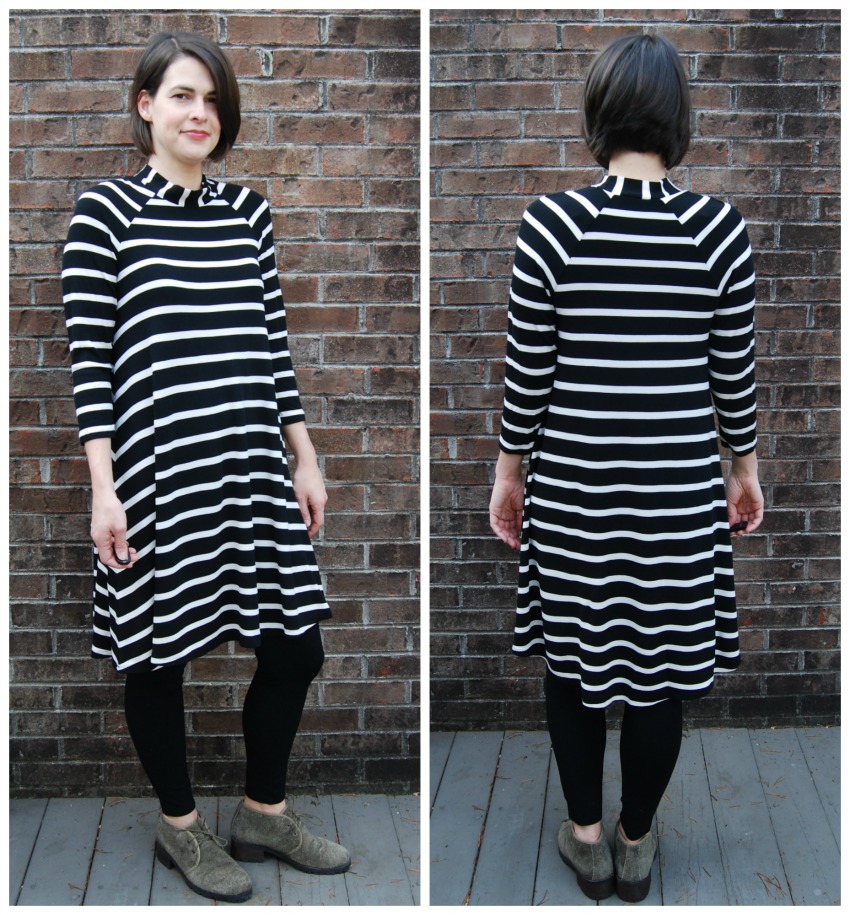 There are darts at the top of shoulder.  I know those darts don't fit my shoulders but you can't tell because of the way the knit stretches.  Are those darts supposed to go to the end of your shoulders?  Just curious.  I cut the neckline just a tiny bit deeper so I didn't have to do a button and loop closure at the back of the neck- per the pattern.  That also eliminated the need for a center back seam so I cut the back on the fold.  I made the sleeves as long as I could with the fabric I had. 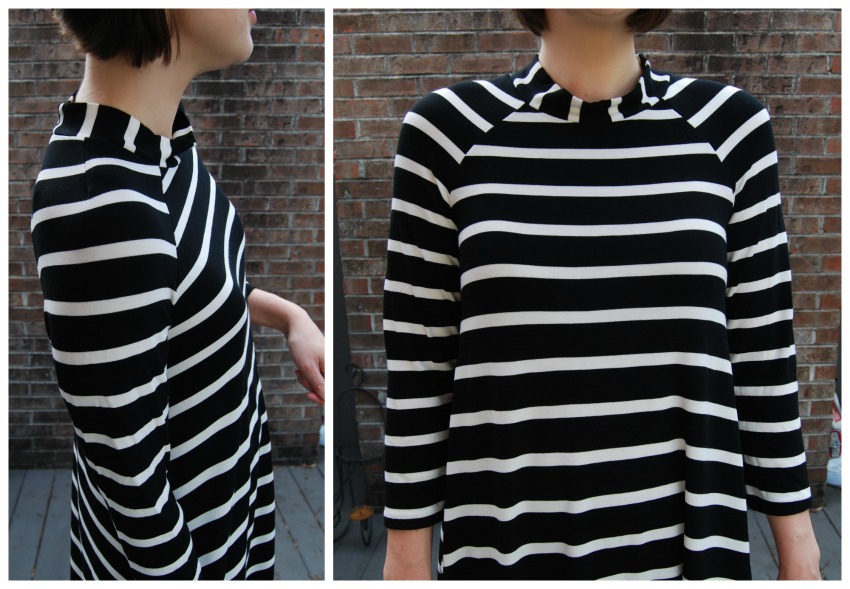 I'm very pleased with how this dress turned out.  I've worn it tons already.  I had no idea I'd like this silhouette so much.  I've already made another dress from this pattern.

Alright, you made it to the end!  That was quite a bit of stuff in one post.  I think I'm burning out on blogging a little bit.  I've been sewing a lot lately but I haven't been able to bring myself to blog like I used to.  I'm hoping it's just a phase.  I really enjoy sewing blogs and the community that goes along with it.  Plus I think it's so useful to see your work in pictures and write about it.  I feel like it makes me a better sewist.  Time to reflect and critique.  Anyway, I'm blathering.  Until next time!