Ugh, postpartum body issues.  I'm ready for you to go away.  I don't want to be too negative because I am in absolute awe of what my body just did/is doing.  It grew a person, birthed said person and is now nourishing this little being.  The design is really amazing when you think about it.  But man, it would do wonders for my self esteem if I could just drop this last fifteen pounds.  I really want to wear my pre-pregnancy me-made things.  All my fun skirts/shorts/dresses are taunting me from my closet. 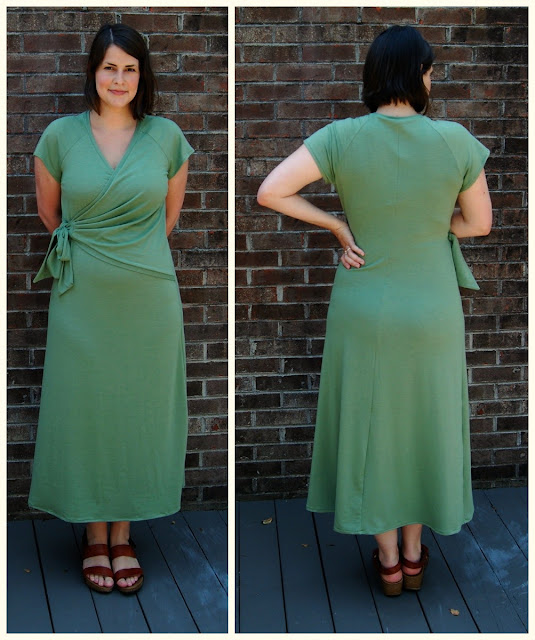 I know I'll get there but in the meantime I figure I better try and make a few things.   I wish I had thought more about clothes to wear while nursing during pregnancy.  There are so many things that don't work while you are breastfeeding.  I feel like I am in a constant state of undress at home.  I joke that it's like Mardi Gras at my house.  Is this TMI?  Sorry, family :) 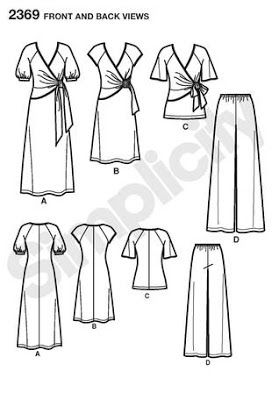 I googled sewing patterns good for breastfeeding and came upon this post at Toferet's Empty Bobbin.  Molly, I thought you'd get a kick out of that.  And Molly is right- Simplicity 2369 is the perfect pattern for nursing.  Look.

Lol.  Total access without undressing.  Woo hoo!  The design is ingenious for nursing moms even though I don't think the pattern was intended for that.  I sewed up the longer view with no alterations.  I actually made the top version first out of a cotton knit and it was horrendous.  The knit I used had no recovery and all my seams ended up stretched out and wavy.  I won't even wear it around the house.  This version is much better.  I used a rayon slub jersey from my stash.  It's a little beefier than most rayon jerseys I've used which is nice.   It has great recovery which I'm convinced makes all the difference when hemming knits.  I'm awfully proud of my sleeve hems.  I know I've lamented my wavy hems before when working with knits.  This time, I upped the differential feed on my serger and serged the edge first.  Then I flipped up the hem and straight stitched with a longer stitch length.  I think they look pretty good.  Not perfect, but good.  I did the same for the skirt hem. 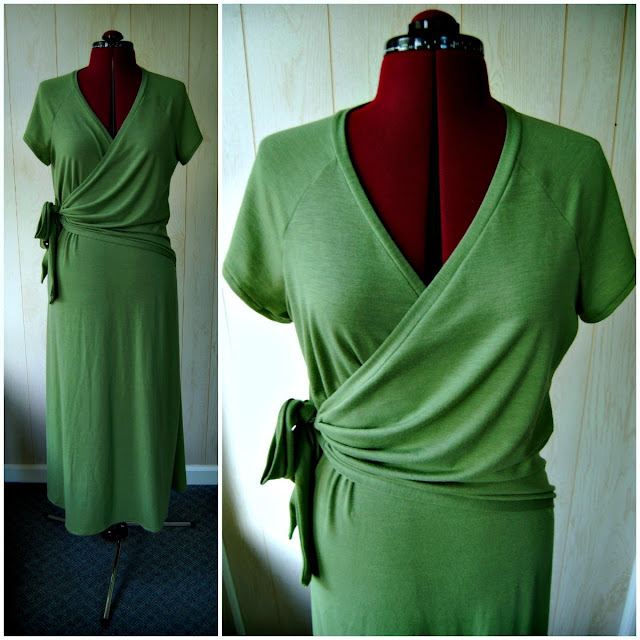 The pattern called for a facing around the neckline.  I attached the facing as a band instead.  I think the finish looks a lot nicer.  I also attached a band at the bottom of the right front piece instead of hemming it.  I hemmed on the first version and it looked wavy and crappy.  I think the finish on this dress is probably my best when it comes to my work with knits.  Hooray, Sergio!

The verdict is that yes, this is a great dress for nursing.  I'm a little meh about the whole shebang but I know I'll wear this lots in the next couple of months.  I think I may need to make another shorter version.  Maybe a more exciting fabric would make me happier with it.

I decided to change up my blog header.  I think I've changed it up every year since I started this blog.  But I used an iphone pic and I'm a little worried that it's too grainy.  It looks ok on my little laptop.  Can anyone with a big monitor/display tell me if the photo looks really grainy and out of focus?  I think I'll leave it for now.  I like the paint palette and had fun playing around on Picmonkey.  Maybe I can take a better photo later.
Posted by liza jane at 5:16 PM 51 comments

Once Upon A Thread: Press Here 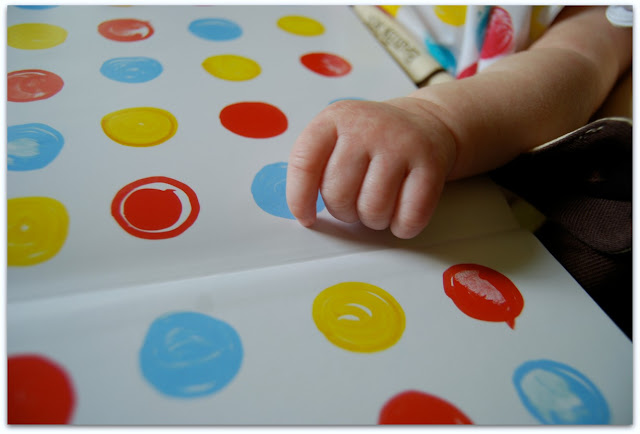 I was so excited when Katy at No Big Dill announced she was doing another chapter of her Once Upon A Thread series last week.  In case you've haven't heard of it before, it's a sewing series inspired by children's books.  It's my favorite sewing series out there by far.  I decided I was going to participate, laundry monster be damned.   I needed an artsy project.  I've been out on maternity leave since baby Jane arrived, which is fabulous timing on my part since my leave lasted through the end of the school year.   Now it's summer and I don't go back to work until August.  But to tell you the truth, I kind of miss my job (I teach elementary art).  Parts of it anyway.  I miss the art making part.   I needed some sort of messy art project to keep my hands busy. 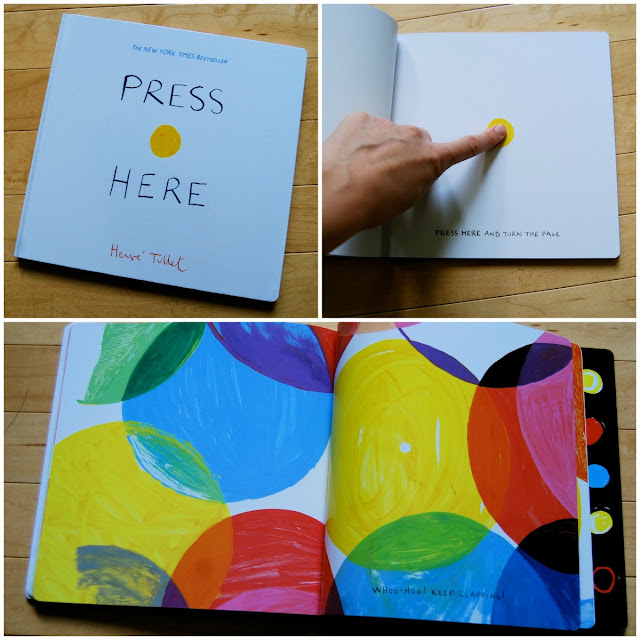 I chose the book Press Here by Herve Tullet.  It's one of my new favorites.  I have quite a collection of children's books at school but I'm now starting a collection for my new little bundle (exciting!).  It's a simple picture book that asks the reader to do certain things to dots- press, rub, blow, clap- and on each page the dots change.   It's sort of a play on our obsession with all things electronic and interactive.  I love the dots.  I was inspired by the illustrations.  I thought the simplicity would work well as a fabric design. 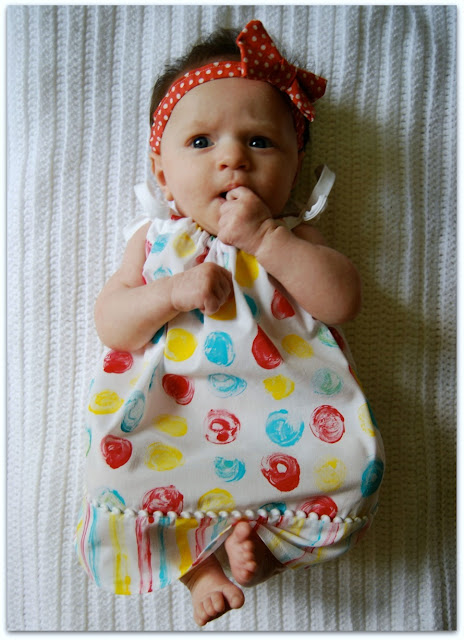 I'm pretty sure the original illustrations are painted, but I thought they resembled a monoprint.  And I wanted to try monoprinting on fabric.   A monoprint is simply a one-of print.  Typically anytime you make a print you make multiples.   A monoprint is different because it's a one time deal.  Whenever I teach monoprinting to my kids at school, I tell them it's a print of a painting.  I figure that's a good way to explain it in elementary school terms. 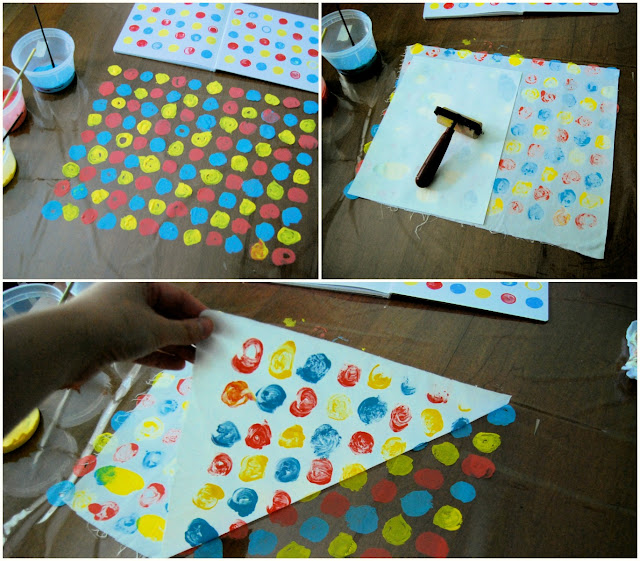 Traditional monoprints are done on glass or Plexiglas using a press.  At school we do them on leftover pieces of laminating film.  I ended up using a roll of clear cellophane I had.  It was cheap and I had a large area to work from.  You need something non-porous so the paint sits on the surface and doesn't dry very fast.   It's really easy to do.  You paint on whatever slick surface you are using.  I used some Plaid screen printing ink I had.  Then lay your fabric on top to print your image.  I rolled over the back of my fabric with a brayer to make sure everything transferred.  I laid a piece of paper down first so the ink didn't get all over my brayer. 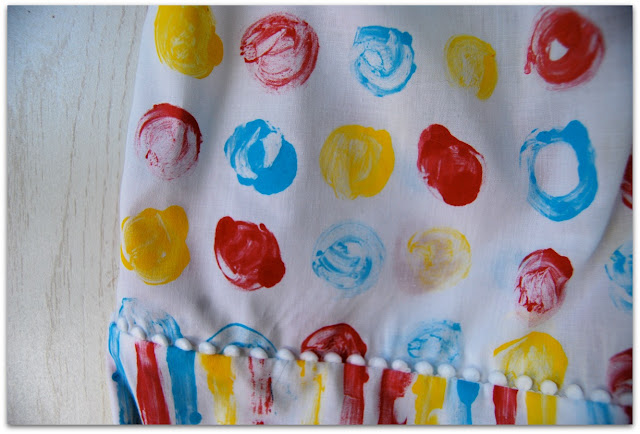 One of the things I love most about this elementary school style monoprint is that you can really see brushstrokes.  That's the main reason I wanted to monoprint the dots instead of just painting them on the fabric.  There is kind of a subtractive nature to monoprinting that you can't get from straight painting on fabric.   Some parts dry and don't print.   And it was fun.  That's a good enough reason, too. 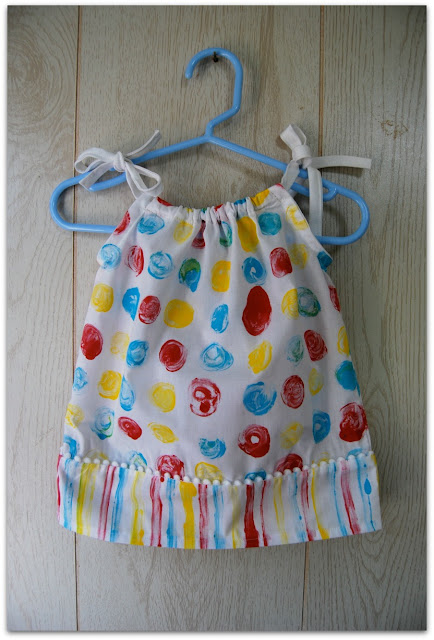 So it was successful!  I printed the dots and then the stripes just because.  Then I made up the dress version of Simplicity 1813, the same pattern I used to make baby Jane's sunsuit.  It's a great little pattern.  You could probably do something a lot cooler with monoprinting on fabric but this was a fun experiment.  And I think baby Jane looks pretty darn cute in her new dress.  I made the little bow, too.  I've never considered myself a bow person before but who can resist on a face like this. 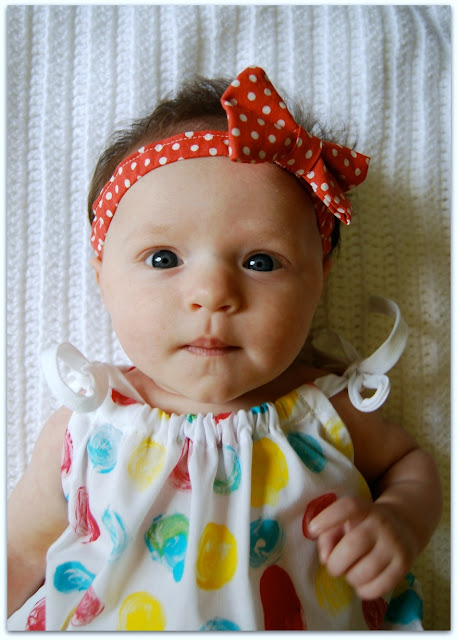 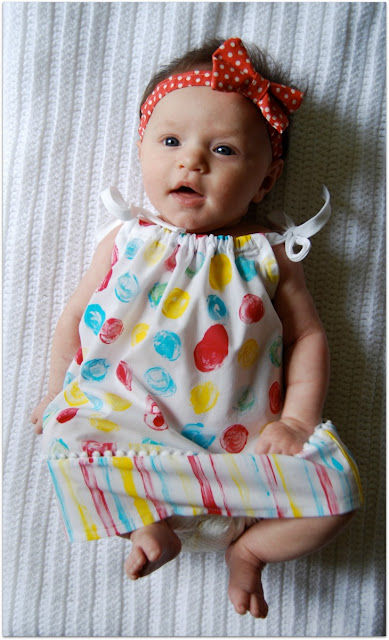 And even though baby Jane is just a babe, she loves being read to.   She's just now discovering she can reach out and touch things and this book is perfect for a little one who is just figuring out how to use those hands.  Look at all those dots begging to be touched. 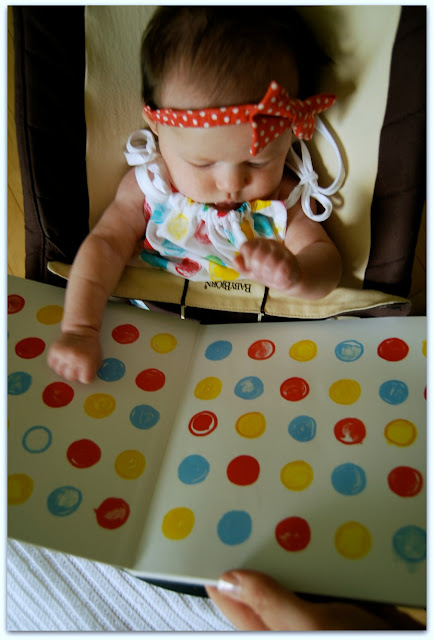 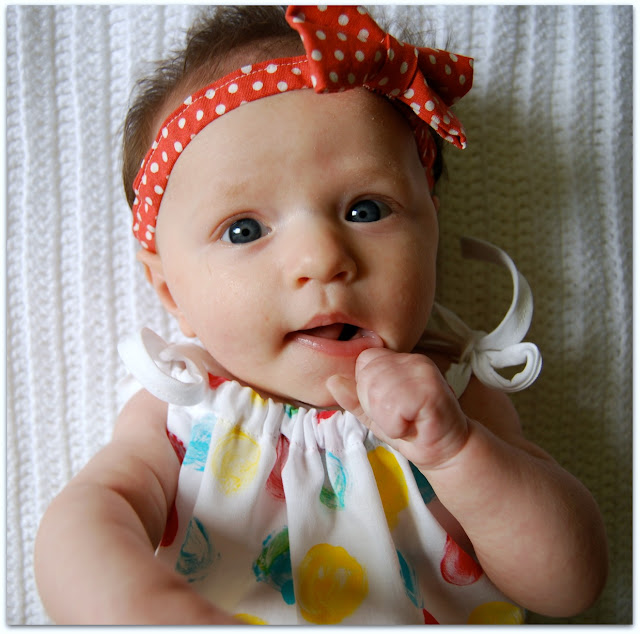 She's saying, "Hands! HANDS, Mom!  These things are great!"
I speak baby now in case you were wondering.

Hooray Katy for your awesome series!  I had so much fun working on this.  Go check out all the awesomeness over at No Big Dill, folks.

So, who is this mysterious and well dressed baby? 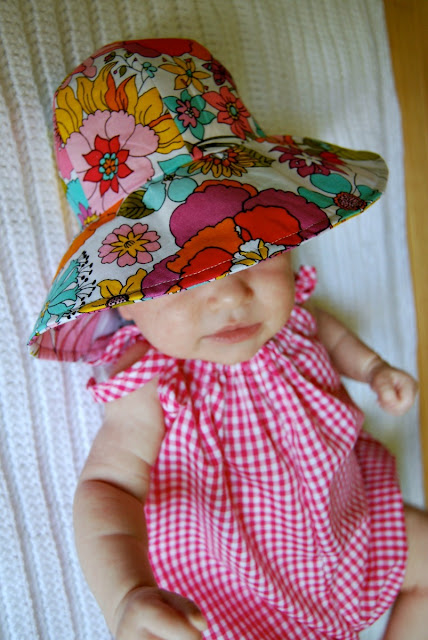 Why it's baby Jane.  Imagine that.  I'll go ahead and warn you that this is a baby picture heavy post just in case you're not in to that sort of thing.  What in the world is wrong with you if that's the case?!?! 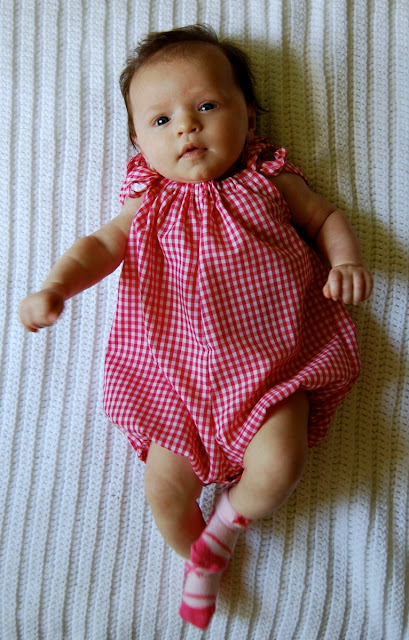 I'm kidding.  No, really, I totally get it.  Before I had a baby I enjoyed looking at other people's baby pictures with sort of an apathetic interest.  I mean all babies are totally cute, of course.  No doubt about that.  But something changes when you have your own baby.  I melt in to a little puddle of goo every time I look through these pictures of her.  And I love looking at friend's baby pictures, too.  I've never commented on so many random facebook photos before.  J said he's become that guy at work that busts out his phone to show off baby pictures to anyone who shows the tiniest bit of interest.  We're dorks. 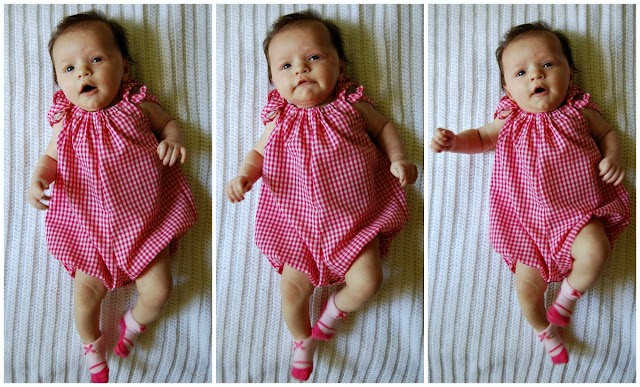 If this photo had sound... :)
Anyway, moving on.  I sewed!  SEWED!!  Can you tell I'm elated about that?  Baby Jane is quite possibly the sweetest thing in the whole wide world and I love her.  But she does not sleep. Does not sleep.  She takes little catnaps.  Which doesn't allow me to do a whole lot during the day.  I'm lucky if I brush my teeth and put on pants.  Is that TMI?  Thirty minutes here, twenty minutes there.  That's it.  She does do about a five hour stretch at night but that is pretty much the extent of her sleep time.  Any tips on how to get her to take a longer nap are appreciated although I think this may just be her style.  She's not a great sleeper.  But who really cares with a face like this.  Gah! I love her. 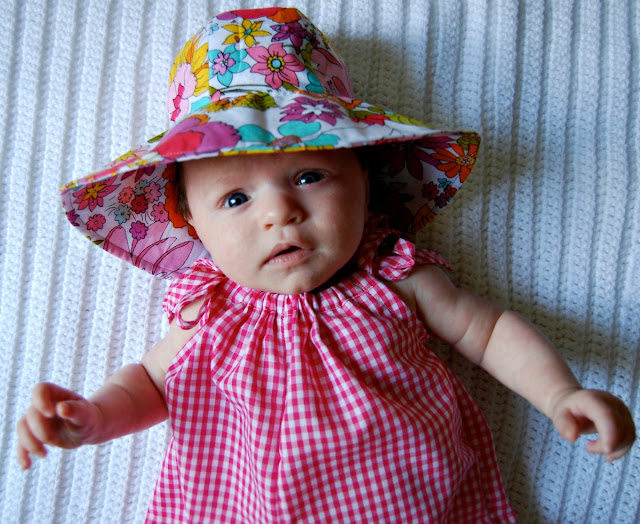 I made this little sunsuit and bucket hat along with a larger version for a friend's little girl over the past two weeks.  I literally sewed one seam at a time, stealing a few minutes whenever I could.  This little bit of sewing really helped me feel somewhat normal again.  It's amazing how wrapped up and reclusive you can become with a new bub. 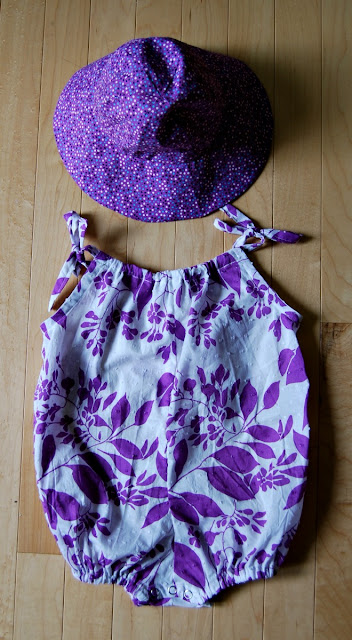 The pattern is a vintage reprint that Simplicity put out last summer.  I thought the gingham was appropriate but you could have a lot of fun choosing fabrics and customizing this.  Great pattern.  I highly recommend it.  I will definitely make it again.  It was super easy and is very cute on.  The only change I made was to use about a third of the elastic the pattern called for in the top casings.  The length they specified in the pattern barely gathered the top of the sunsuit. 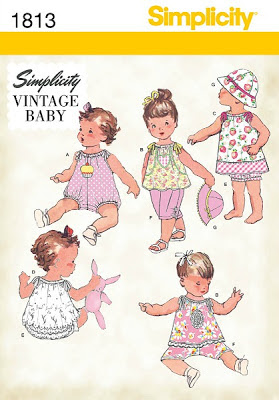 The hat is a wild quilting cotton I found at Hobby Lobby.  The purple version is made of stash fabrics.  I absolutely love the hat but guess who hates it? 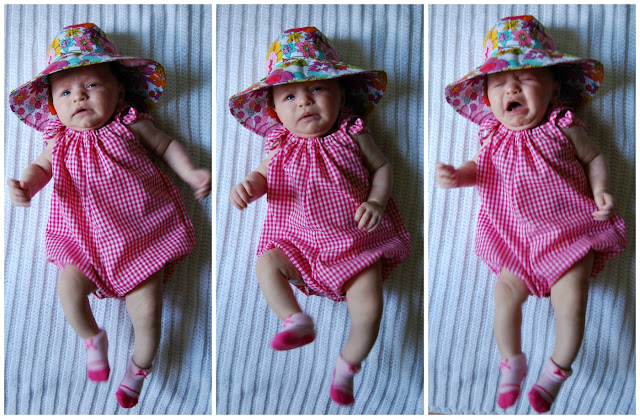 Hates it.  Bwahaha! I love that progression above.  Happened every time I put the dang thing back on her head. 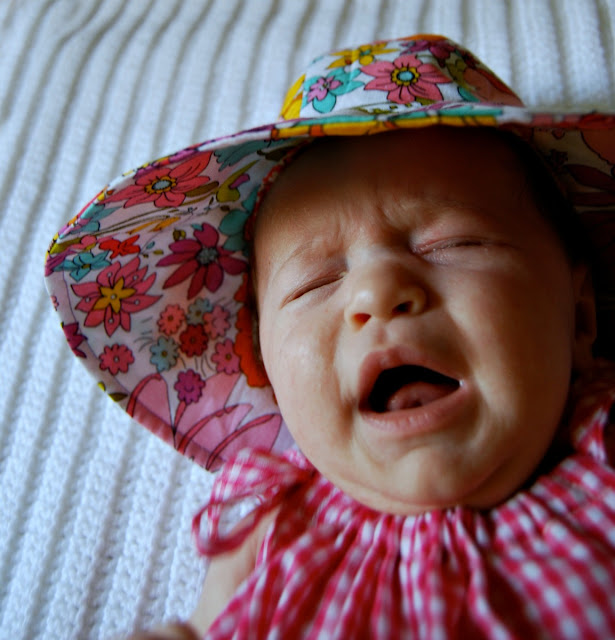 Even her cry face is cute.  You'll appreciate my sewing one day, baby Jane.  Am I a terrible mother to make her wear it anyway? ;)