I know, I know.  Color-- I need some color in my life.  But the black and white really makes getting dressed so easy.  Everything works together.  I have recently purchased some wild, colorful fabrics.  So one day soon.  Anyway, I made a few more black and white tops. 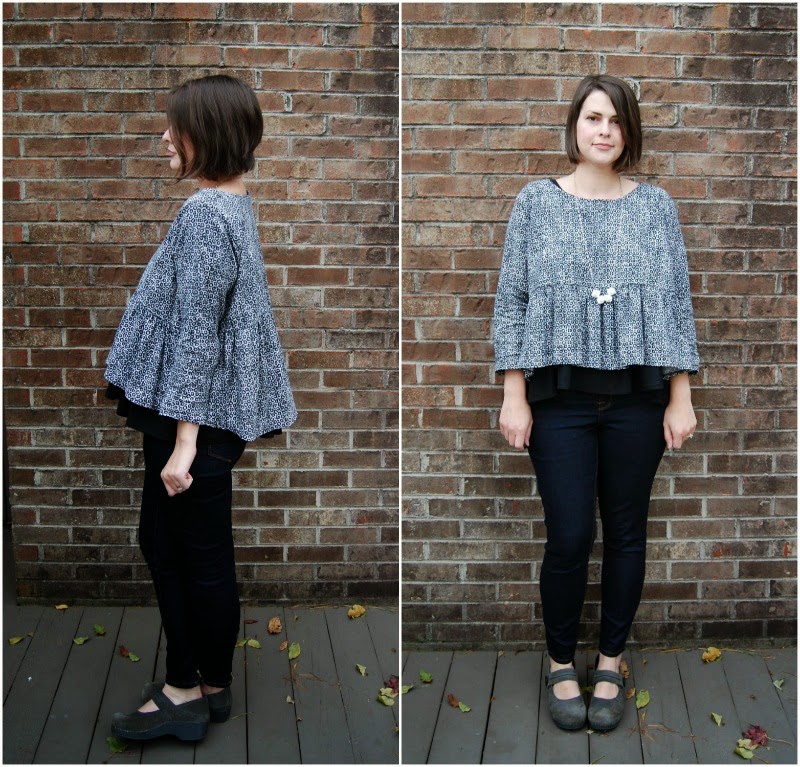 A few posts back, I wrote about two tops I made from Tina Givens' Jacqueline pattern.  The black and white color blocked version has become a favorite.  I wear it a lot despite the crazy amount of fullness.  And I actually get quite a few compliments when I wear it.  I think all that volume works well because it's cropped.  It looks good with skinny pants.  I love wearing it because it's fun to wear something with all that fluff.  No need to worry about standing up straight and sucking in :) 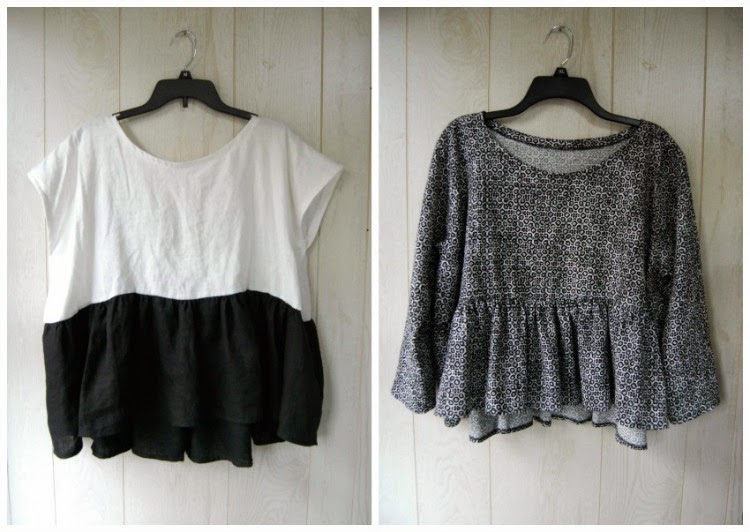 The first version I made was the black and white printed linen version with long sleeves.  I made it up almost exactly as the pattern intended.  Except I lengthened the back panel two inches and used one less panel of fabric in the gathered skirt.  I really liked the first version I made, but it's short.  It truly is cropped.  I was having a hard time figuring out what to wear it with.  Most of my jeans and pants were too low.  I wanted to make something to wear under it to add some length.

The pattern is intended to go over a slip, also included in the pattern (along with pants that really aren't my cup of tea).  I wasn't sure how I felt about the cropped, gathered top over another longer layer.  But I thought I'd try it out. I made up the slip in a black rayon knit.  Unfortunately my version is shorter because I didn't have enough fabric.  I folded out about three inches of length right from the middle of the pattern and then redrew the side seams to match.  So my version is about three inches shorter, but taken from the middle.  I did not like the asymmetrical handkerchief hem when I was done.  It just looked sloppy in a knit.  So I made it symmetrical. 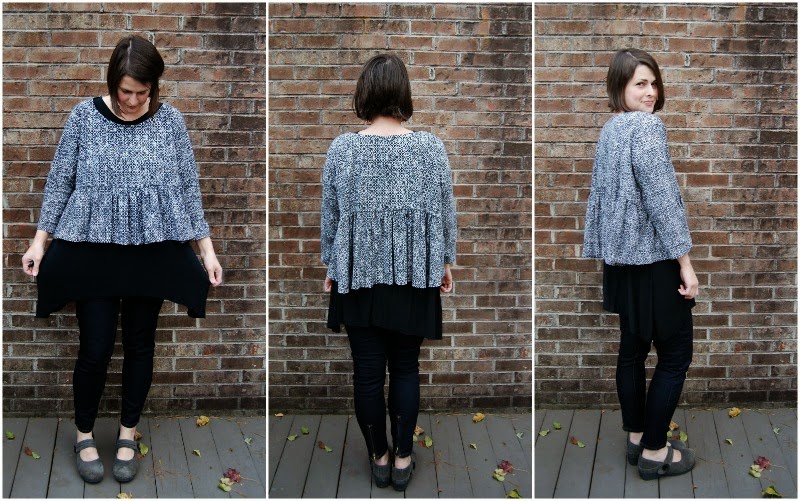 I don't love it underneath the linen top.  It's okay.  It's really different.  But I am loving the long knit tank with other things.  It actually has been worn a lot with long cardigans and skinny jeans.  The armholes are super duper low, though, so no wearing it on it's own without some modification. 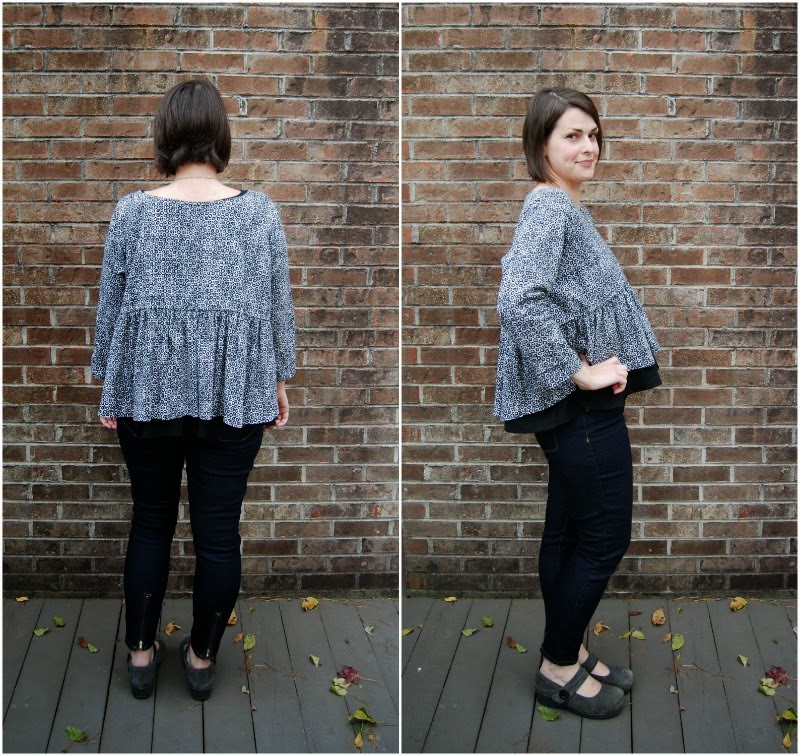 Next, I decided to try a sleeveless version of the same crop top pattern in a black linen.  I made up the crop top pattern just like I did with the black and white version but excluding the sleeves.  I also added two more inches of length to the front and back so it would hang out the bottom.  The result is a whole lot of volume. Mega fluffy.  But I'm kind of digging it.  It's different, too.

Here are the two black tops together.  I used the printed linen for the bias facings on the cropped version.  So it looks like a set with the original top. 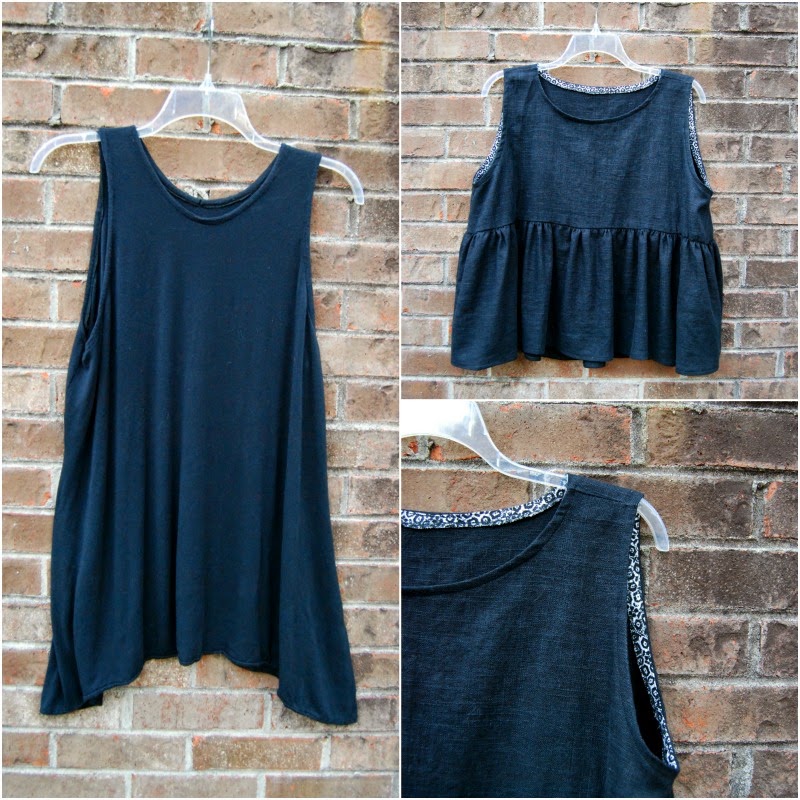 I'm sticking in this last top because it doesn't deserve it's own blog post.  Remember the plaid disaster in this post?  Simplicity 1366.  I decided to give the top a go since it seems to have such good reviews.  I made it in a white linen and one size smaller than I would normally cut.  Remember I bought the wrong size pattern envelope and had to do some 'grading' to try and make the skirt work.  This top is a size 12.  I usually wear a 14.  And it's still really boxy.  Just something to keep in mind.  The dropped shoulder is pretty cool.  It does have a very modern shape.  I don't hate it, but the length is really short on me again.  I'm at a loss as to what to wear with it.  I'm going to hang on to it but I'll have to figure out something later.  I'm wearing it with my skinny jeans for photos but I don't think I'd rock this look in my everyday life.  I feel a little exposed without my bum covered. 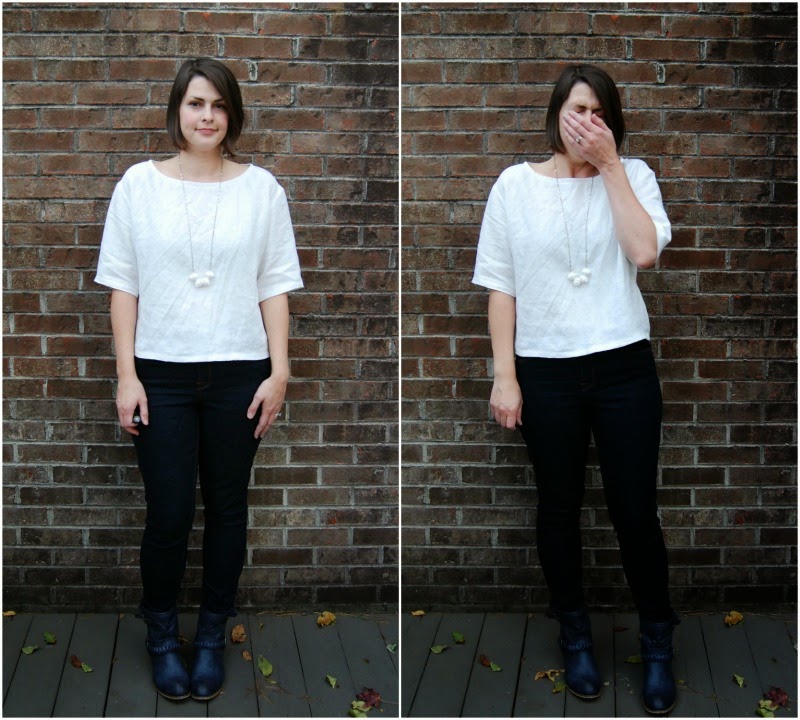 My remote timer caught me in a sneeze.  Ha! So some more basics that are decent. Nothing too terribly exciting.  I think I like the black cropped version best with the original top.  You really can't go wrong with sewing in black and white.  Well, I guess you can always go wrong somewhere, but you know what I mean.  Happy sewing!