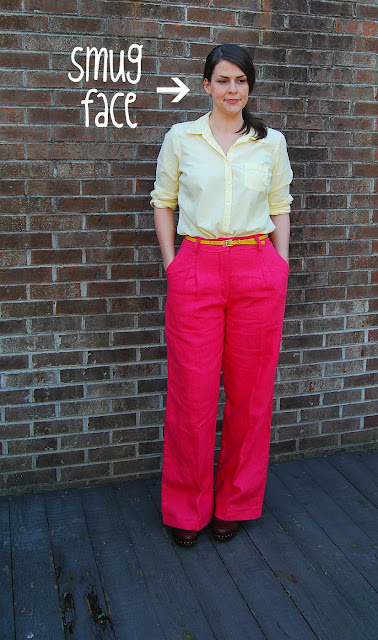 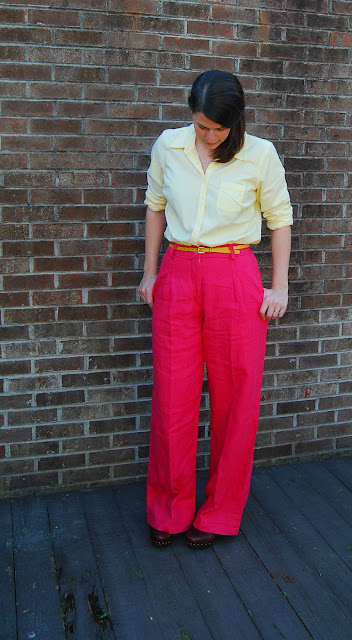 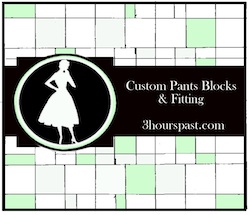 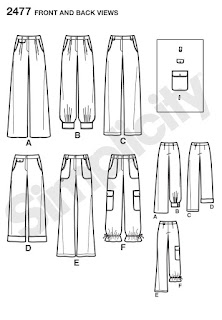 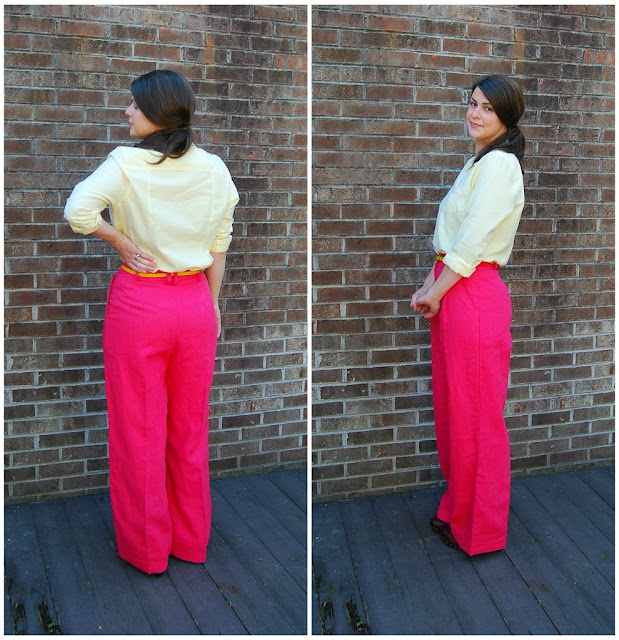 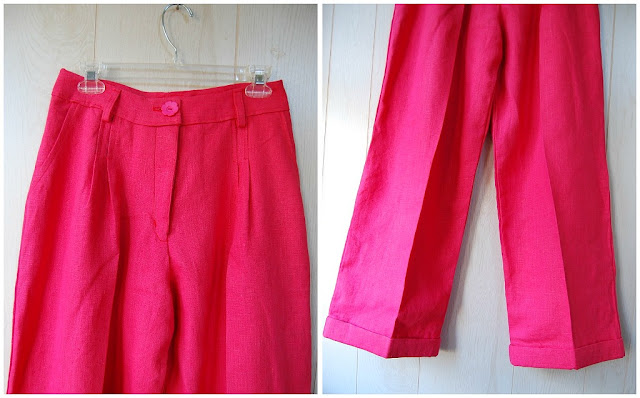 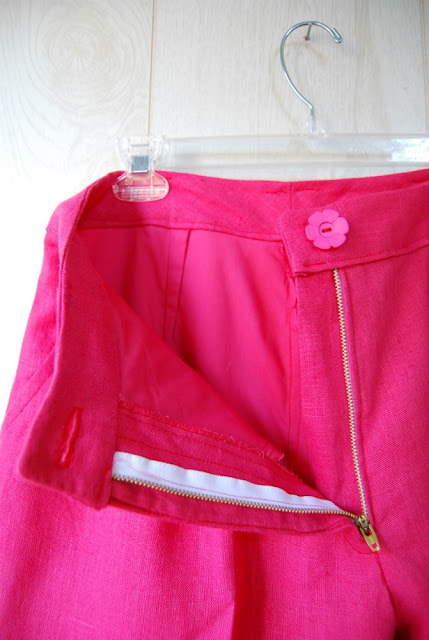 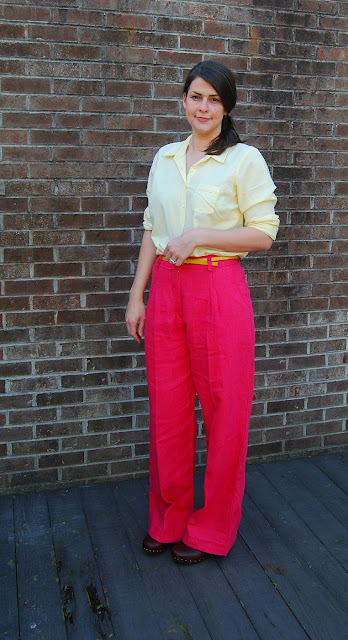 We, teachers, are counting the days until spring break.
Yes indeed we are.
I catch myself being really short this time of year.  The weather is starting to warm up and everyone is itching for a reprieve.  I try to remain as patient as I possibly can.  But just this morning I caught my blood pressure rising after one of my little friends put that hat back on his head as soon as I turned around even though I just told him to take it off..... 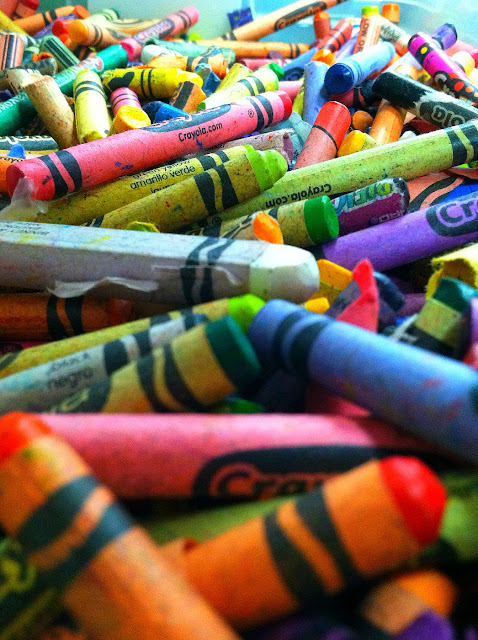 Carolyn just gave me a sunshine award.  I decided I needed a little sunshine in my life.  Instead of answering questions,  I snapped a few photos of my daily work routine on my phone. This is a pictorial answering of questions.  Sort of.  Besides, I don't think I'd ever be able to pick a favorite color.  That would be like a mother having to pick a favorite child. 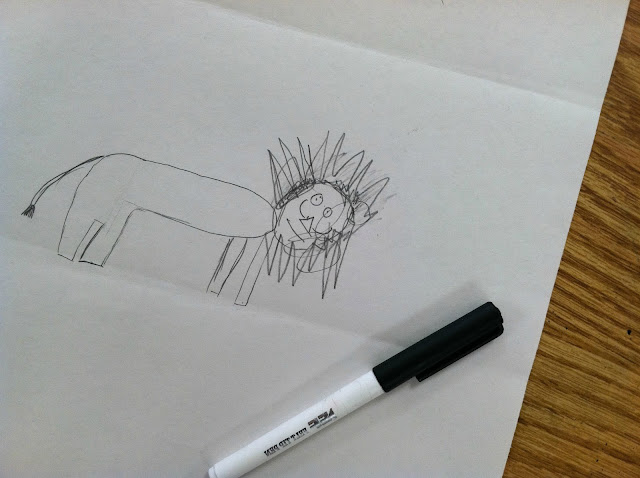 Afterwards, as I flipped through my photos, I noticed my blood pressure lowering.  I really do have a fun job.  Look at what I get to work with all day.  Fun stuff. 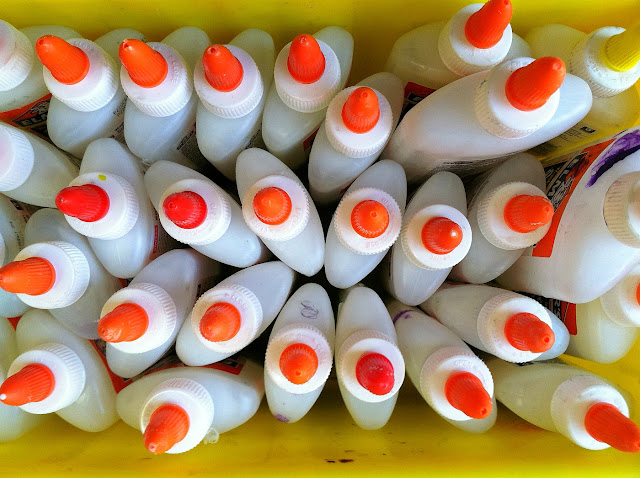 There's no shortage of projects at work.  I was starting to feel a little down on myself about my shortage of sewing projects lately.  Never a dull moment at school. 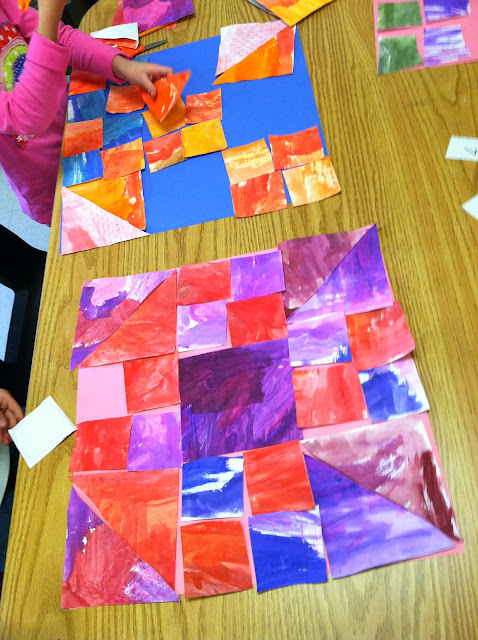 This was a really nice reminder of how lucky I am to be able to make a living from my passion: creating. 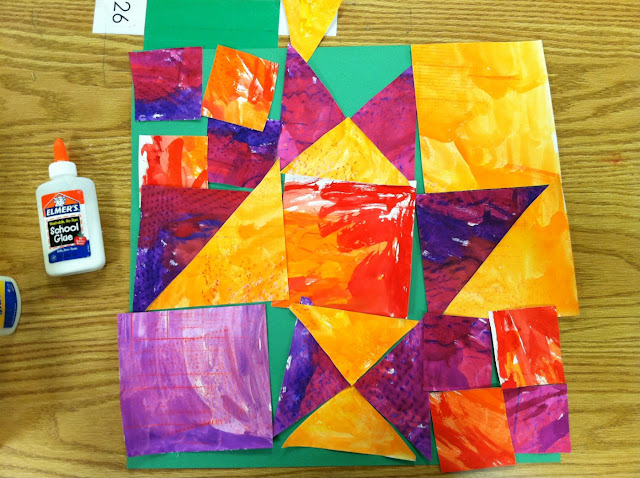 And later in the day, I didn't even raise an eyebrow when another one of my little friends decided to paint his neighbor's face instead of his paper. 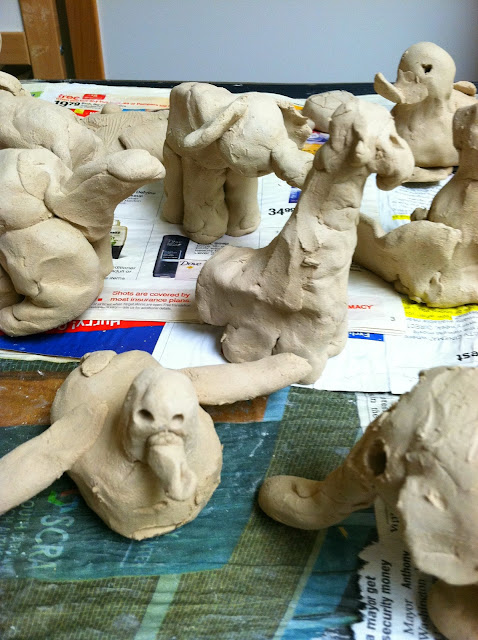 Ok, well maybe I did raise an eyebrow. 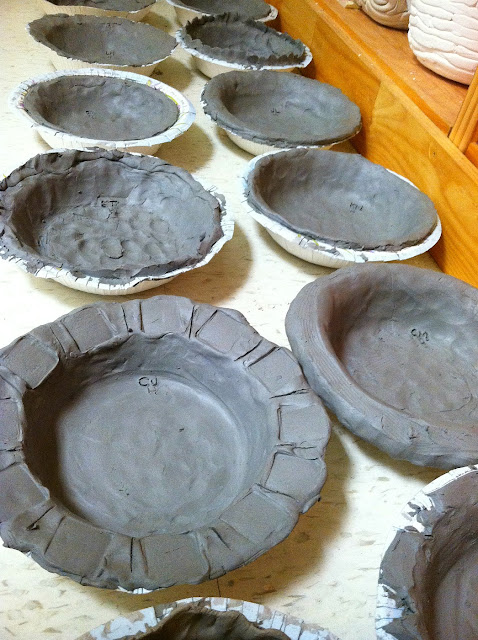 Or two.
But you get the idea. 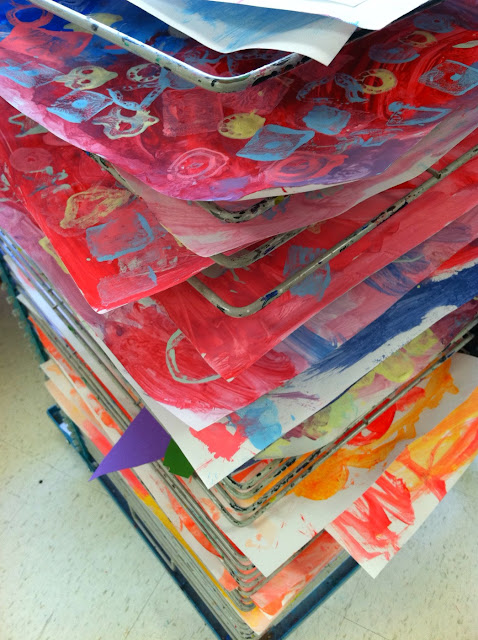 Thanks, Carolyn!
I needed that. 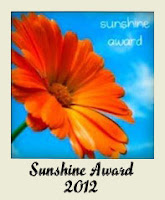 I'm passing along sunshine to....

Because you all bring a little sunshine to this sewing blogiverse.

On a side note, if you gave me an award in the past couple of months and I didn't post a formal blog response, I apologize.  Thank you so much.  I really, really do appreciate it.

Email ThisBlogThis!Share to TwitterShare to FacebookShare to Pinterest
Labels: award, randomness, thank you 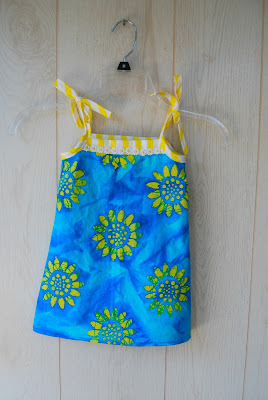 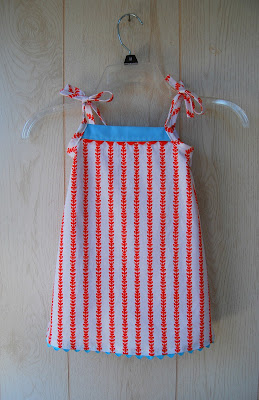 The solution to rebounding from an epic sewing fail?  Make something for a baby.

I made up a few popover dresses this weekend, which is a fabulous, quick and easy pattern from Oliver and S.  I had fun sorting through my stash of small fabric scraps and leftover trims.  I hang on to so many fabric scraps-- pieces that are too small to make anything pour moi but too big to get rid off.  The first two dresses are for a friend's baby who turned one this weekend.  The sizing on the free pattern wasn't small enough so I shrunk it down ten percent on a copier.  It looks right to me. 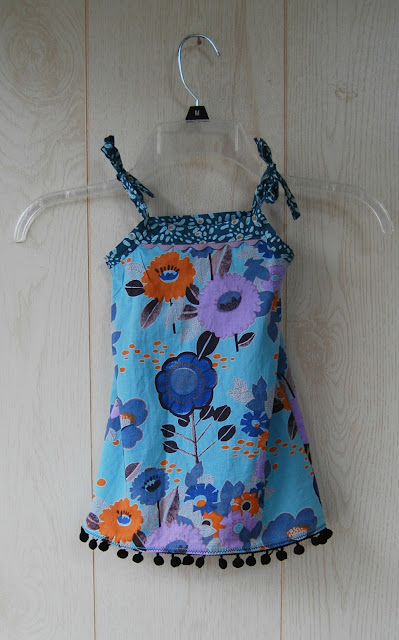 This one was made for a coworker who is having a shower this week.  I shrunk the pattern down again.  I used fabric from an old top I'd been saving.  I actually never wore the top but couldn't part with it because I loved the print so much.   Which got me thinking-- I really, really love this print.  But will my coworker?  When you make things for other people, do you ever wonder if they will like it as much as you do?  I had to ask myself if I was making something because I thought the recipient would like it, or if it was simply because I liked it.  I guess that's what happens when you sew for others.  You run the risk of making something not quite their style because of your own preferences.

Anyway, in the end I decided it didn't matter.  And I'm sure she'll like it.  I mean, who doesn't love bobble trim? ;)

The Stuff of Nightmares 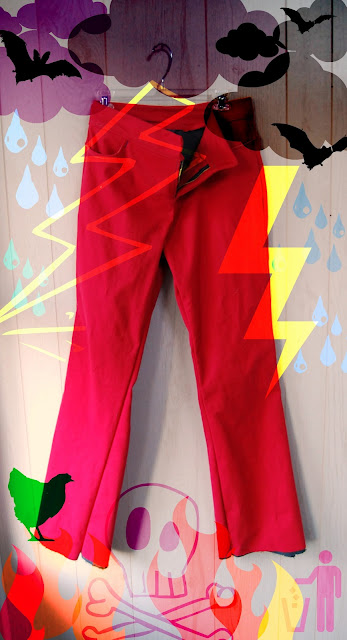 I spent all week working on these.

No, scratch that.  I've spent numerous hours of precious sewing time working on these for the past month.  I have muslined-- multiple times, in fact.  I have tweaked.  I have trimmed.  I have refined.
Then, I sewed like a demon.  Seven, maybe eight hours of sewing time.  I underlined.  I top stitched.  I bar-tacked.
[cue ominous music]

Let this be a lesson to you all.  Do not use cheapo fabric.  Do not use a pattern against your better judgement (Butterick 5683).  Do not press forward when your instincts tell you it's not going to work.

I'm not going to go in to too much detail about these.  It's too terrifying.  I'll only point out a few flaws.  See that twisty leg?  Yep.  Pretty sure that's a byproduct of crappy, off grain fabric (just because it's three dollars a yard doesn't mean you should buy it...)  Or my shady underlining job.  The waistband never did match up.  And the icing on the cake?  When I tried them on for the final time, the zipper broke. Broken beyond repair.  I haven't decided if I'm going to attempt to fix them, or burn them.

On a side note, is anyone else going to miss Picnik as much as I am?
Posted by liza jane at 7:37 PM 24 comments