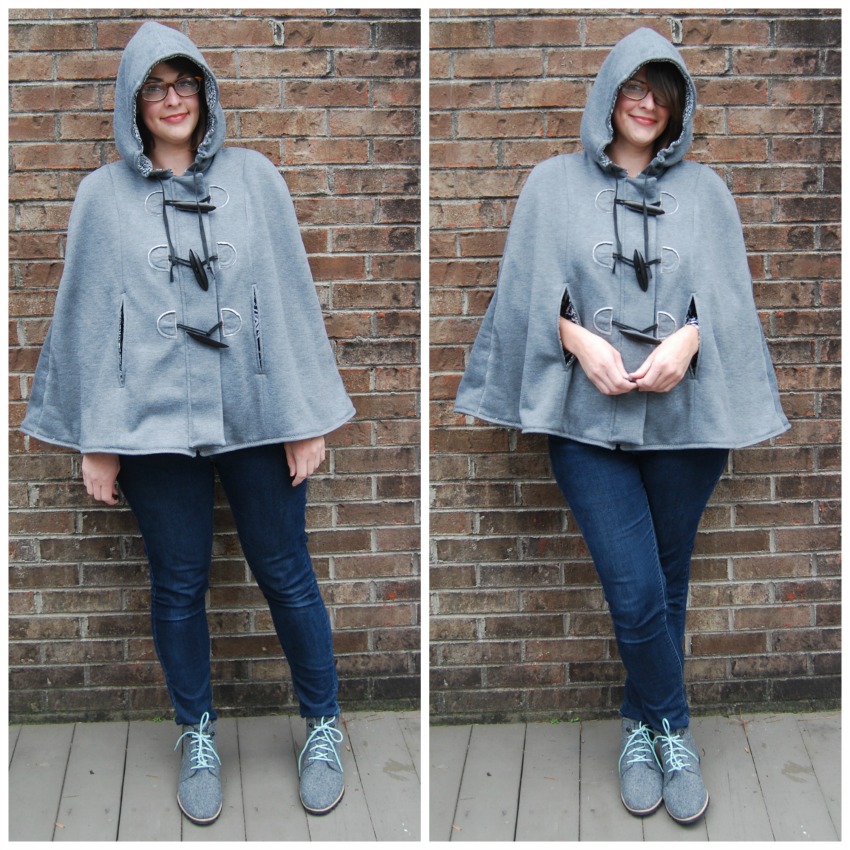 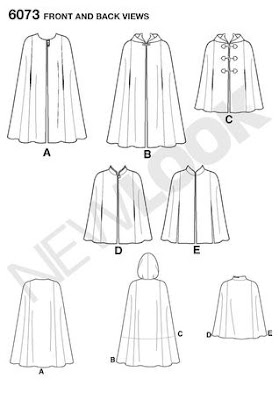 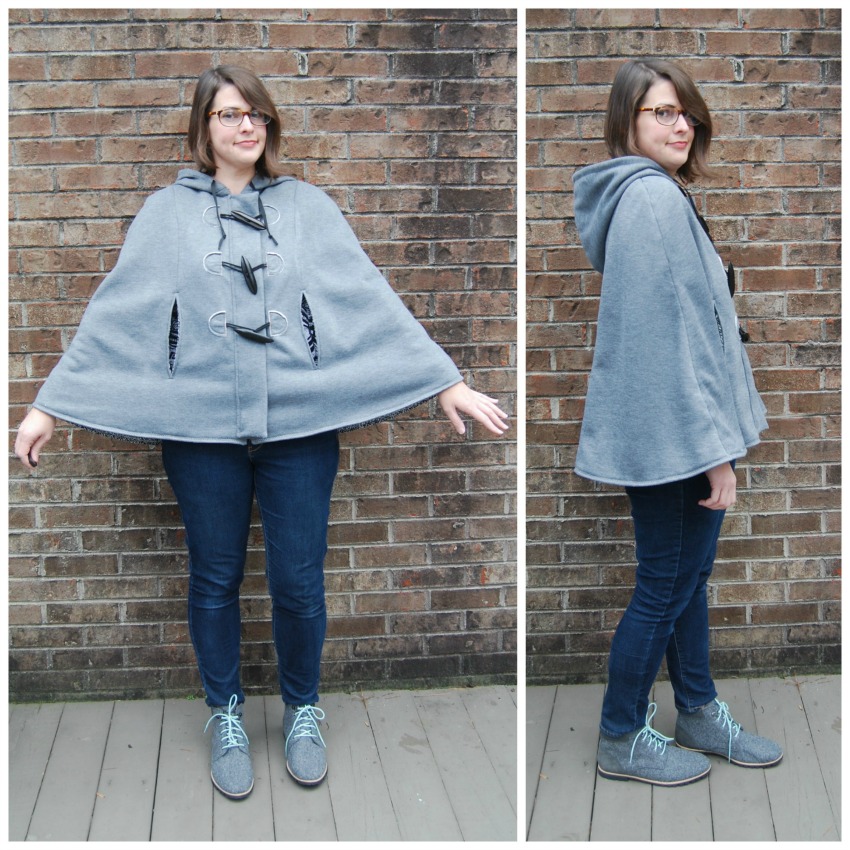 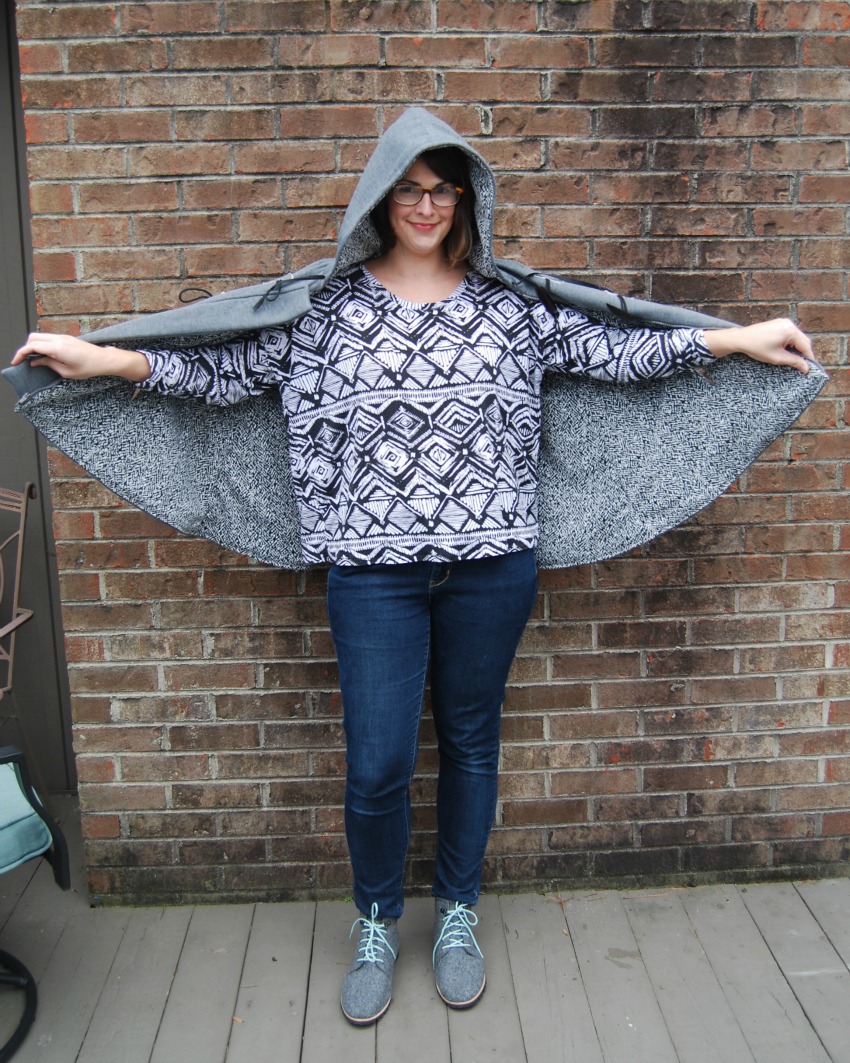 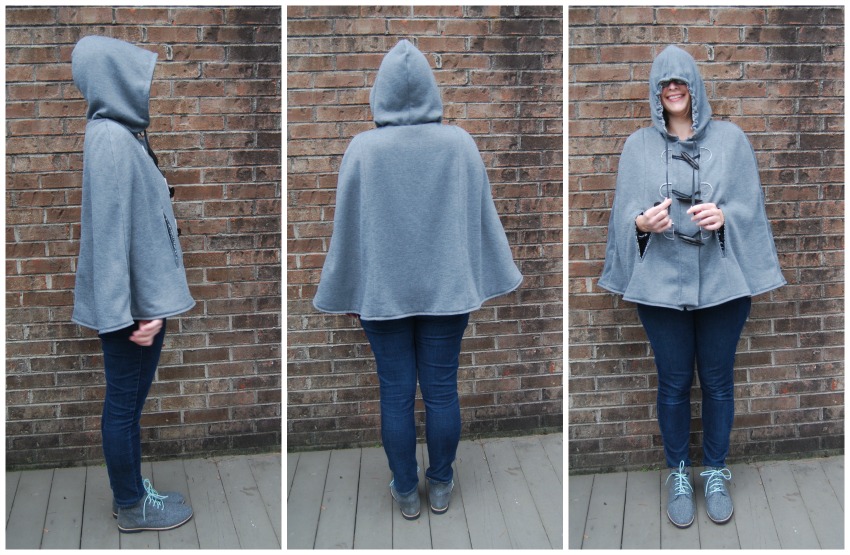 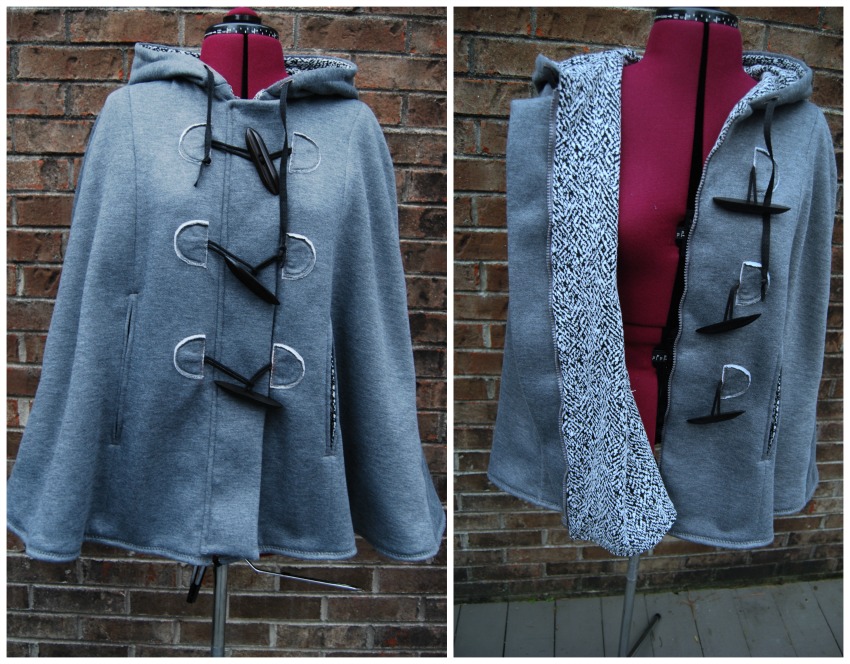 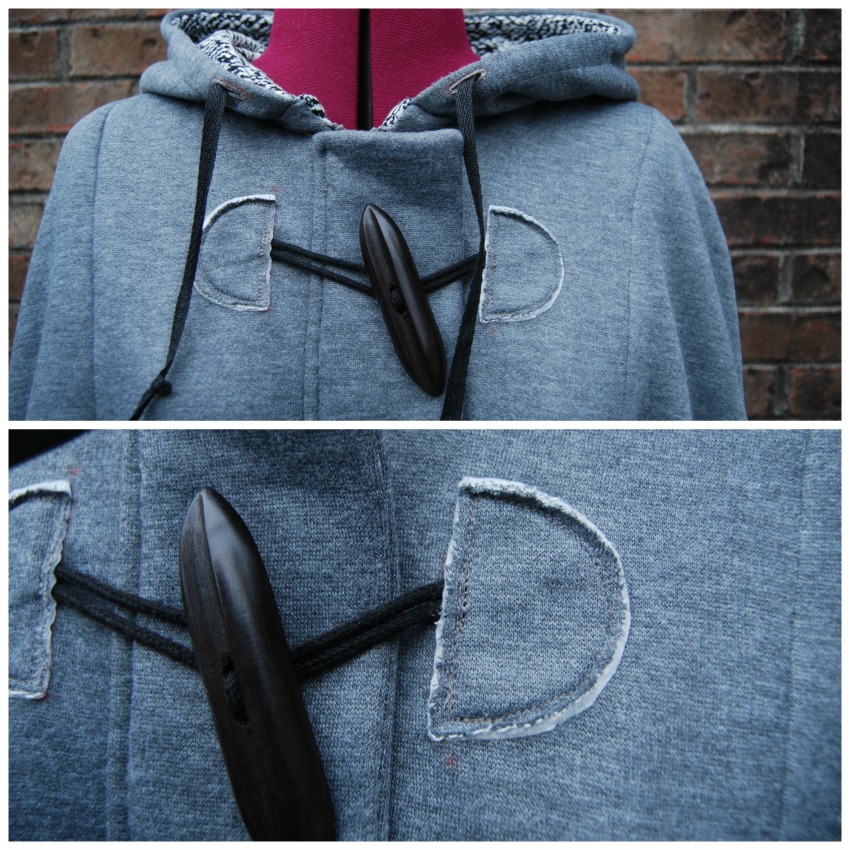 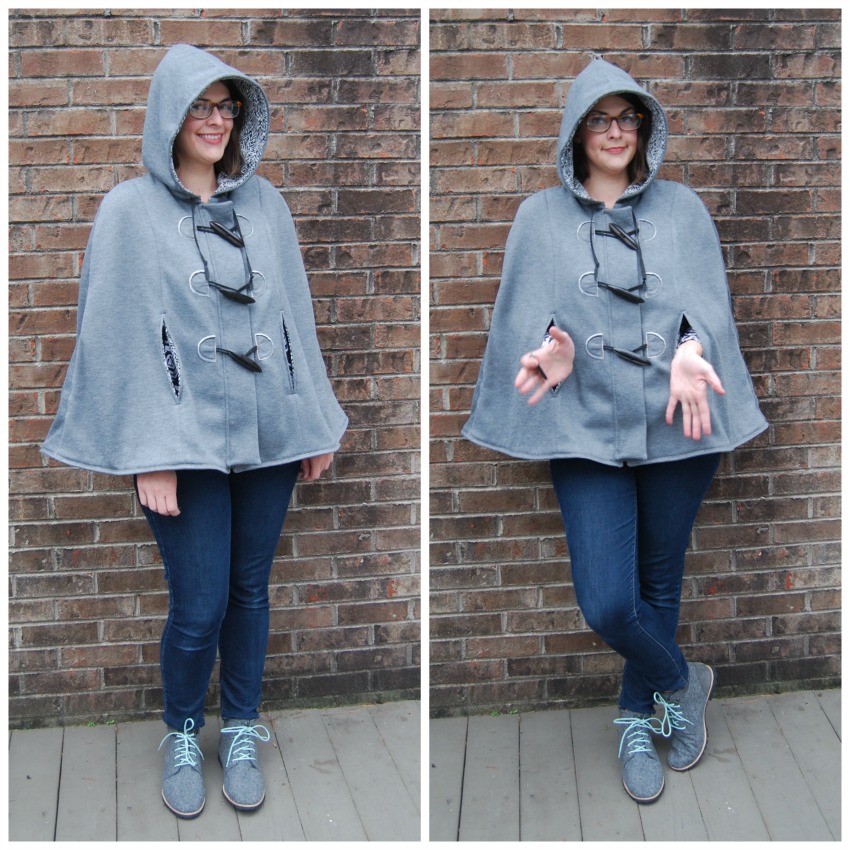 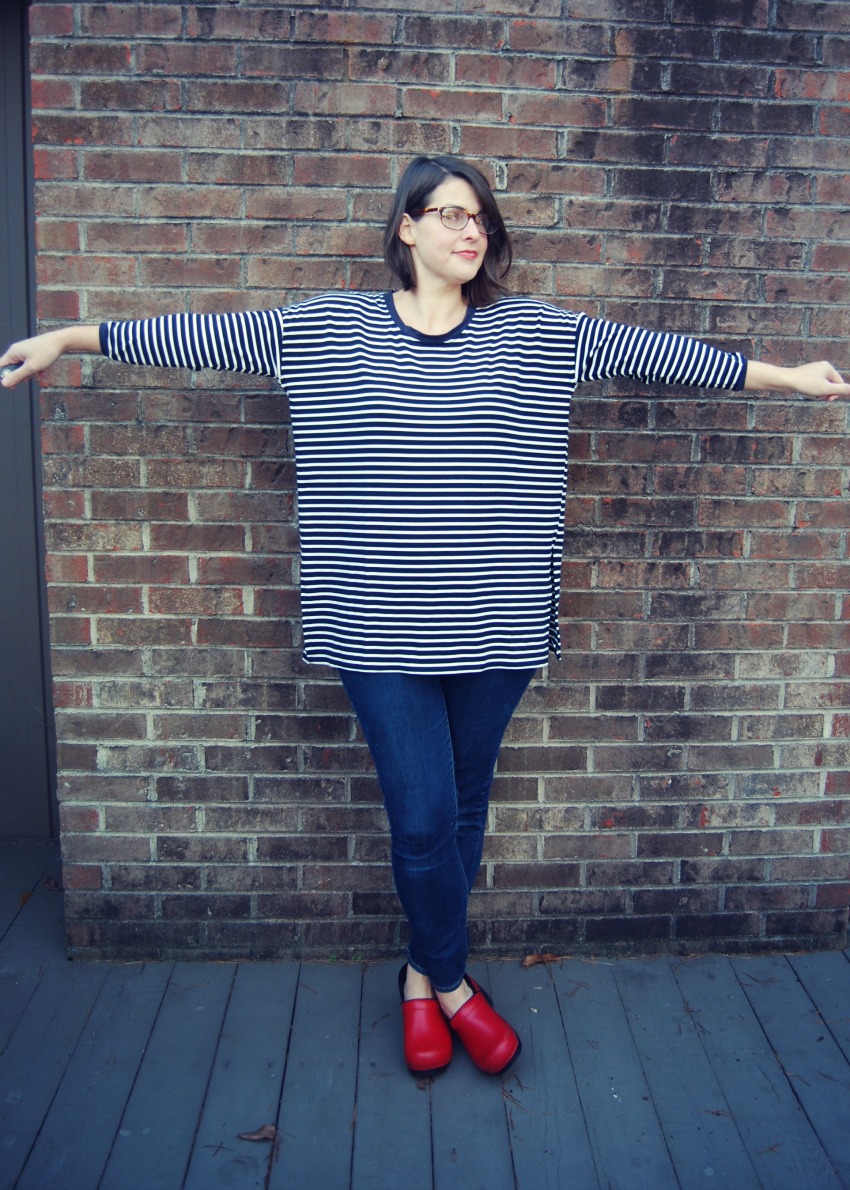 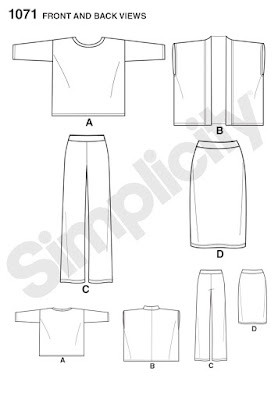 Pattern Description: The pattern is an easy to sew sportswear pattern.  I made the top, obviously.   I'm kind of intrigued by the vest/cardigan.  The top really is just a bunch of rectangles with maybe a little shaping at the sleeve.  I haven't sewn Grainline's Hemlock tee, but it looks just the same to me.  I know that the Hemlock tee is free, but I have come to the realization that I absolutely loathe taping together pdf patterns.  Nothing will stop me from sewing faster than having to tape a pdf together.  I think that's also another reason I use a lot of Big 4 patterns.  And they are cheap and readily available where I am. 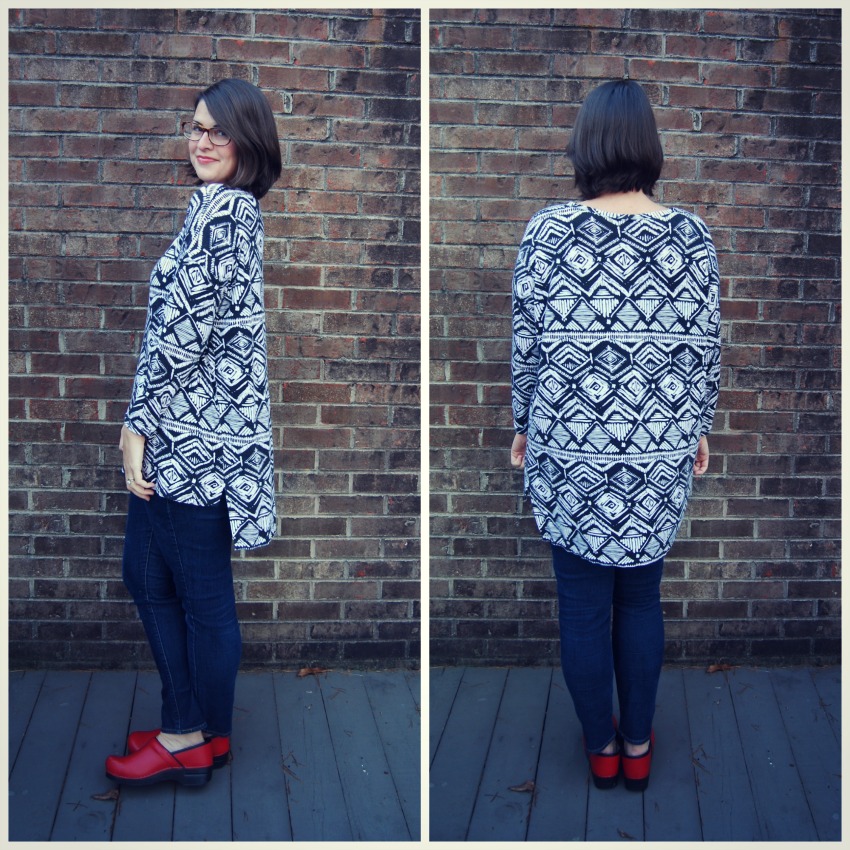 Pattern Sizing: XXS- XXL.  Big size range.  I made a small.  My bust measurement is actually in between a small and medium.  Not that sizing is a big issue with this pattern. 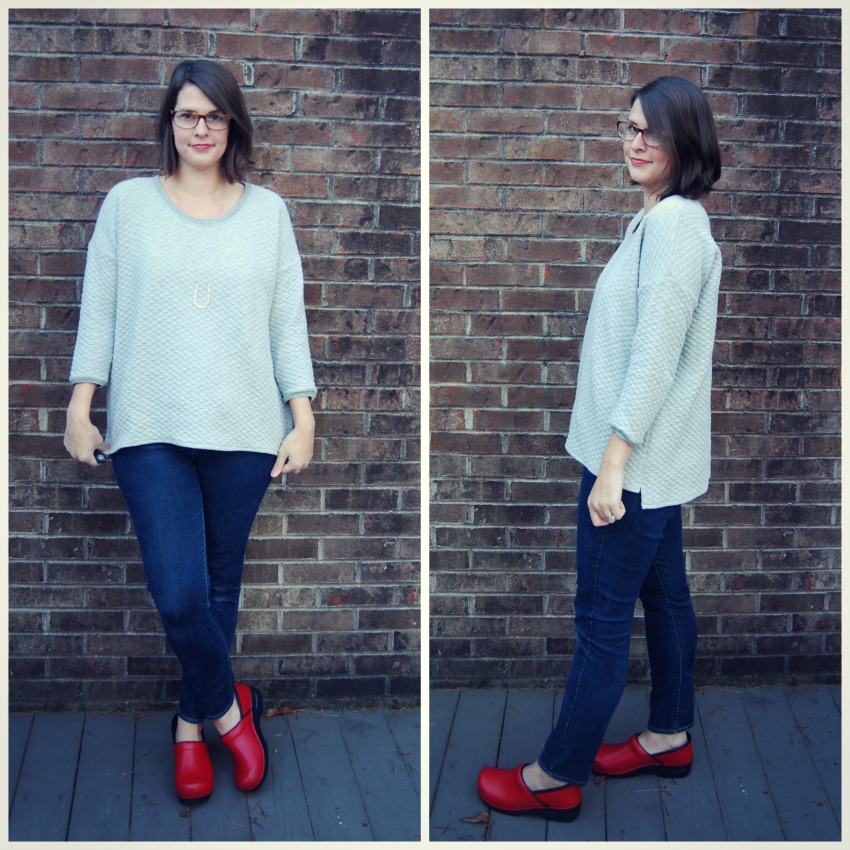 Fabric Used:  Lots of different knits!  My first black and white (super long) version was done in a super cheap rayon knit.  Next, I used a grey quilted sweatshirt knit that I found at Joann's, believe it or not.  It actually has batting quilted in between layers so it's warm.  The grey and black striped version is a cotton/spandex knit that wrinkles like crazy.  The pea green version is a silky bamboo knit.  And the navy stripe is a heavy ponte knit. 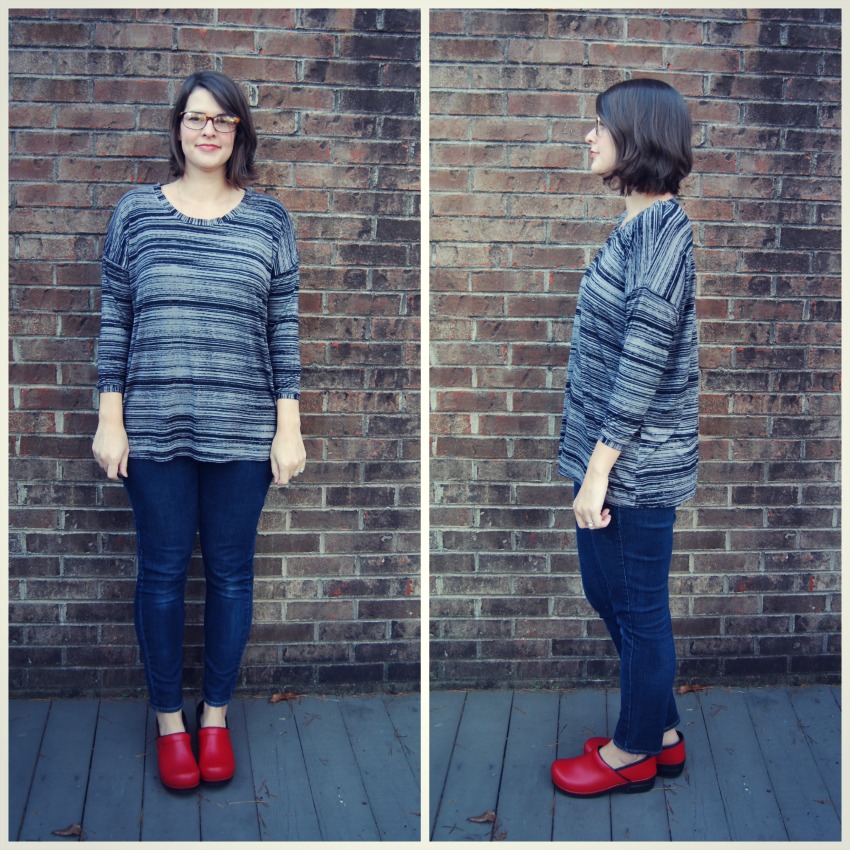 Alterations/Deviations:  I changed the length on almost every version, adding length.  The only version that is close to the original hem length of the pattern is the grey and black striped tee.  I only added two inches to that one.  I wanted all of these to be super long and slouchy.  However, after looking at photos I realize that these are not the most flattering tees I own.  That's ok.  They are not supposed to be.  I may shorten the black and white printed version, though.  Or at least get rid of the longer back.  I also added side seam splits to several versions just because it seemed appropriate.  The navy striped version has extra deep side splits and I like them a lot. 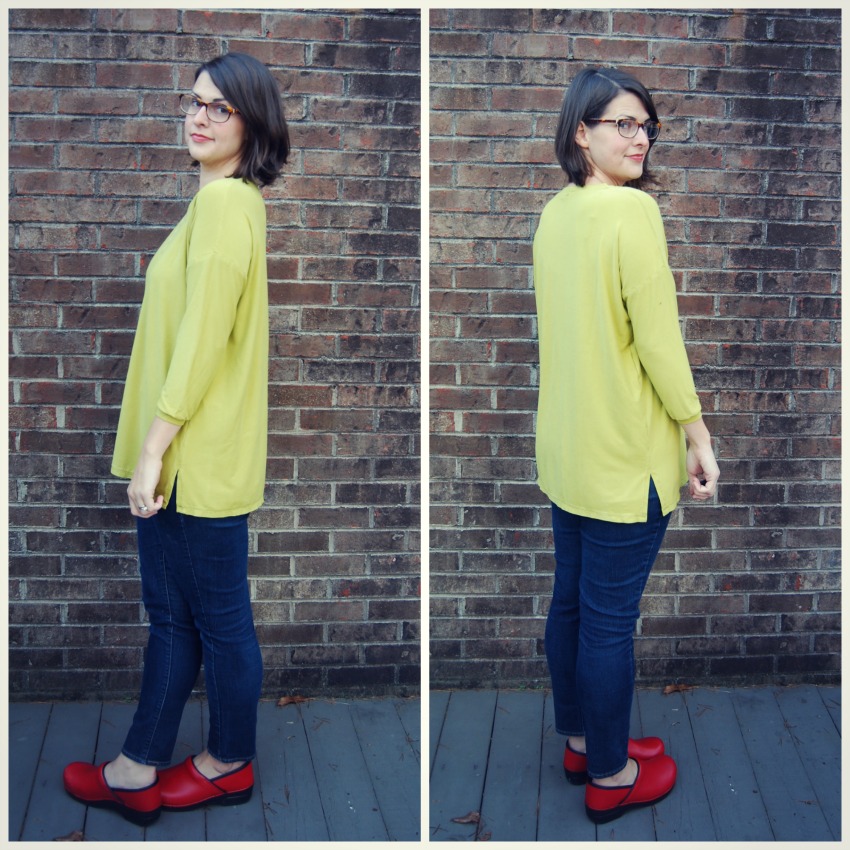 Likes/Dislikes: I like the neckline on this tee.  It's as close to perfect as it gets.  Not to wide and not to high.  It's the perfect depth.  I did not use the neckband pattern piece, though.  Actually, I truly have made six versions of this pattern.  The first version I made was done in a textured knit and I used the neckband pattern piece.  It was too short for the textured knit I used (not a lot of stretch) so I ditched it in all subsequent versions.  For all my other versions, I sewed the neckband on, stretching as I sewed except for the last two inches or so.  Then I measured and sewed the ends of the neckband together before sewing it on to the neckline the rest of the way.  That way I didn't need to guess at length depending on what type of knit I was using.  It was a little fiddly, but I prefer that to sewing on a neckband that isn't the right length.  I still might try and fix my original wadder but I am not inclined to unpick stitching in that textured knit.   I can't remember if sleeve bands are part of the pattern or not, but I used them on all versions.  I guesstimated length on the sleeve bands, too.  I leaned toward a little tighter to keep my sleeves up 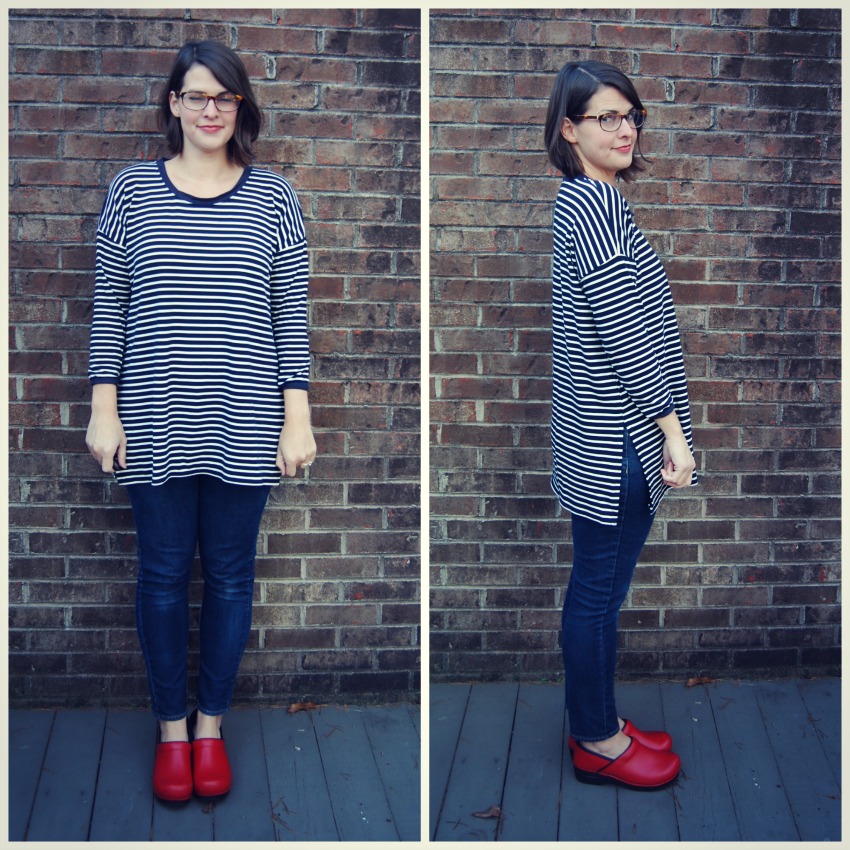 Here's a photo of all the different neckbands.  I used self fabric for most, but used a grey rib knit for the quilted version and a navy jersey for the ponte version.  It was good practice to do all these neckbands in different knits.  The rayon jersey and bamboo seemed to work the best and lay the flattest.  The navy jersey with the ponte knit is all sorts of wavy.  The grey and black version is not the best either since I cut on the cross grain. 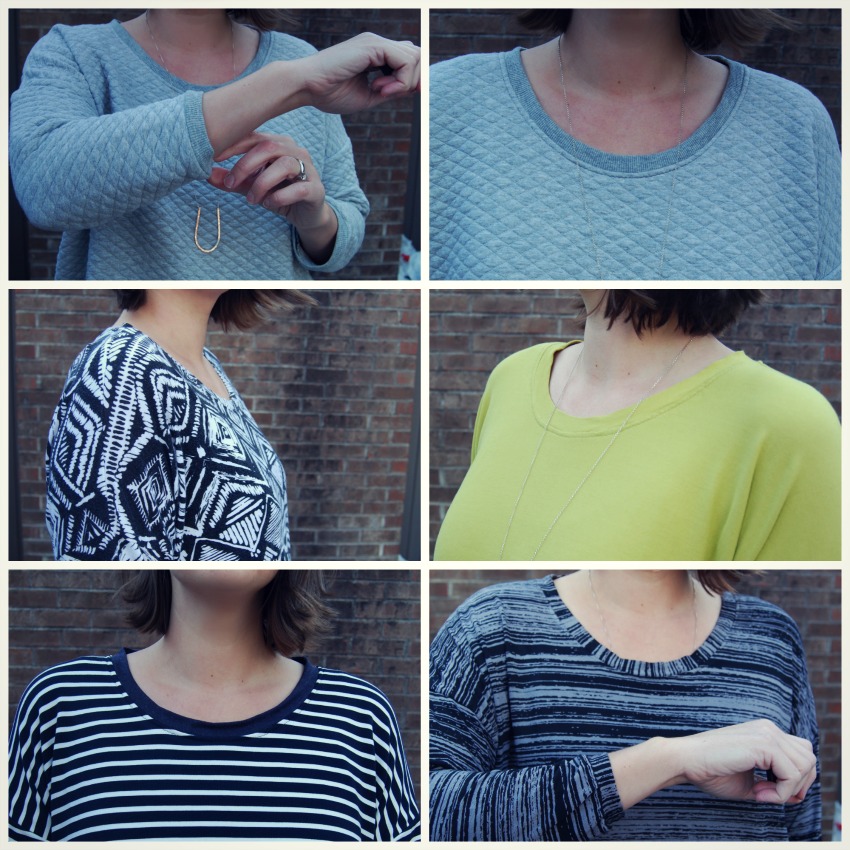 Conclusion:  Wow, I wrote a lot more than I thought I would about this simple pattern.  Great, easy pattern, if slouchy tees are your thing :)  I think I'm done making knit tees at this point.  These definitely filled a gap in my cold weather wardrobe, so I'm pleased with them.  And they have all been worn in non-stop rotation since I've made them.  But it's time to make something a little more difficult, I think!  Winter coat, maybe....