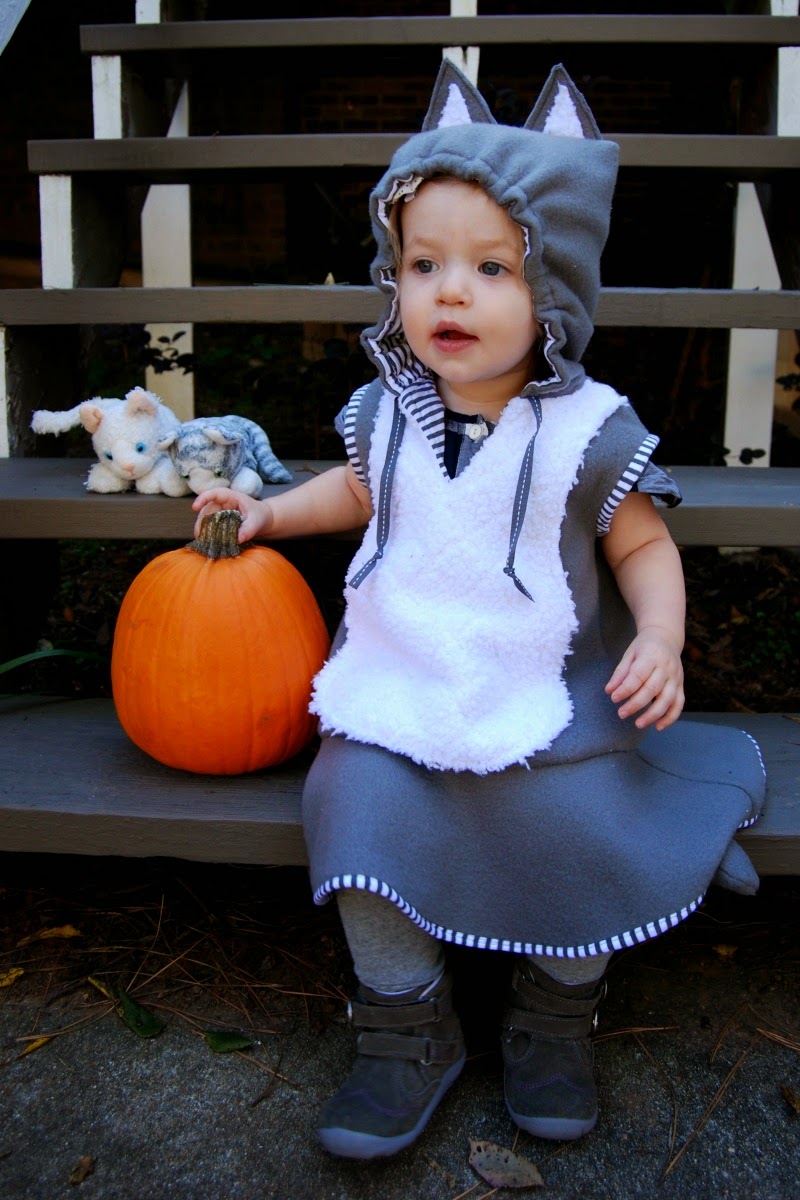 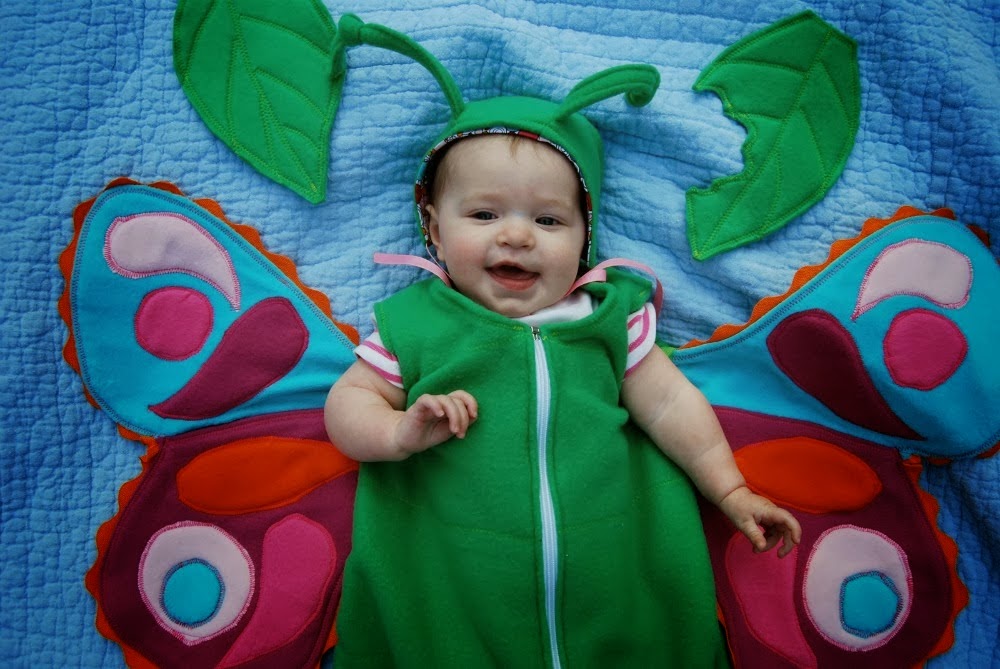 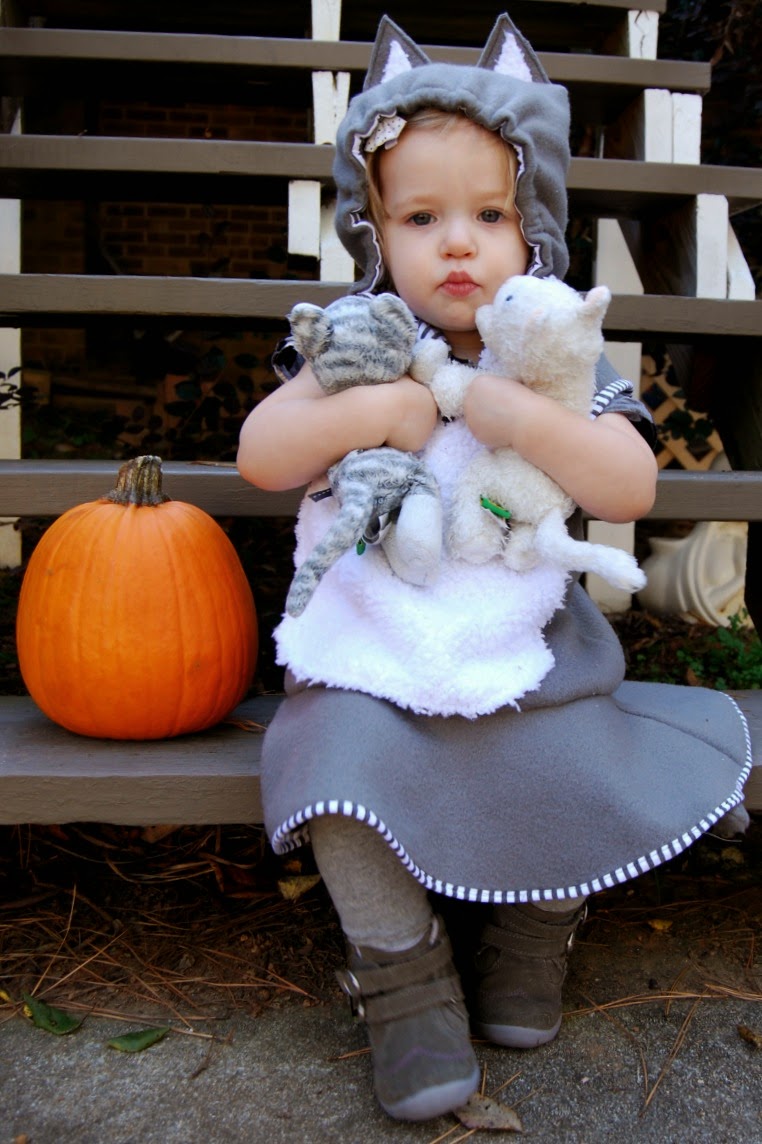 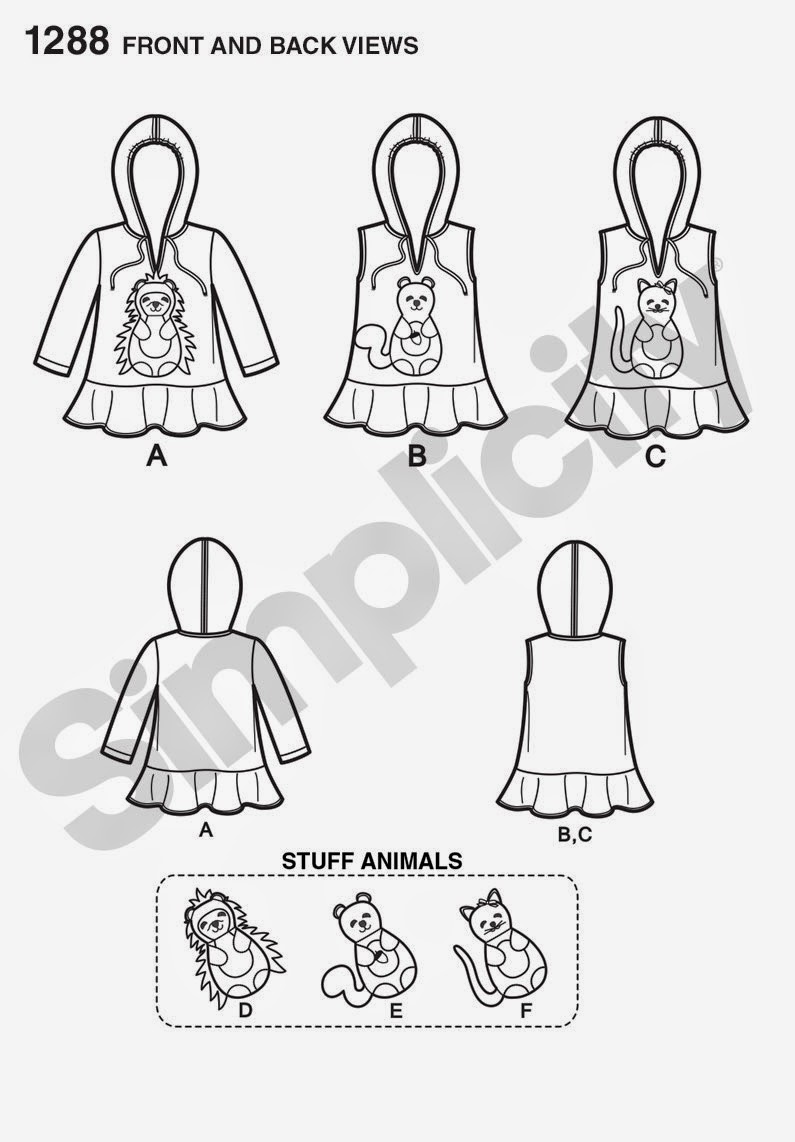 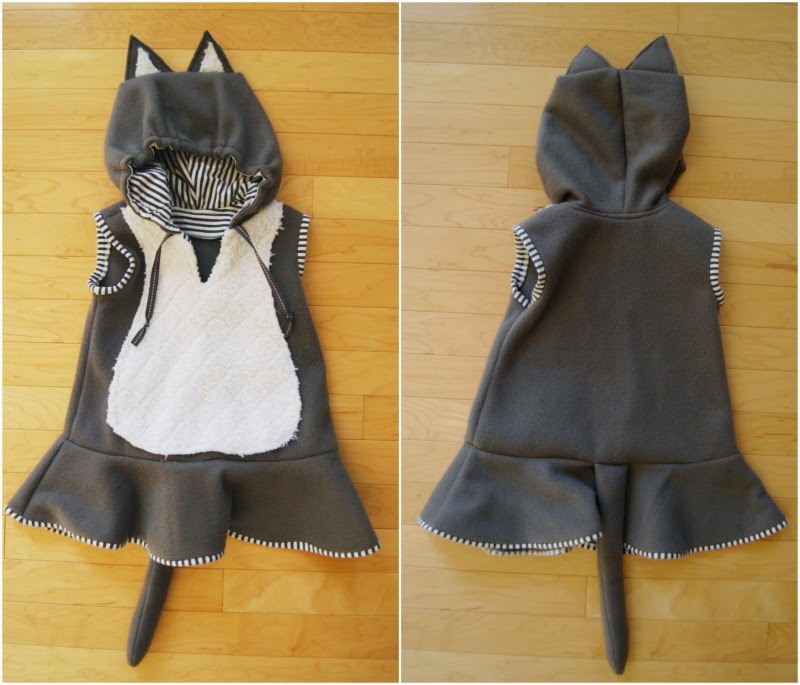 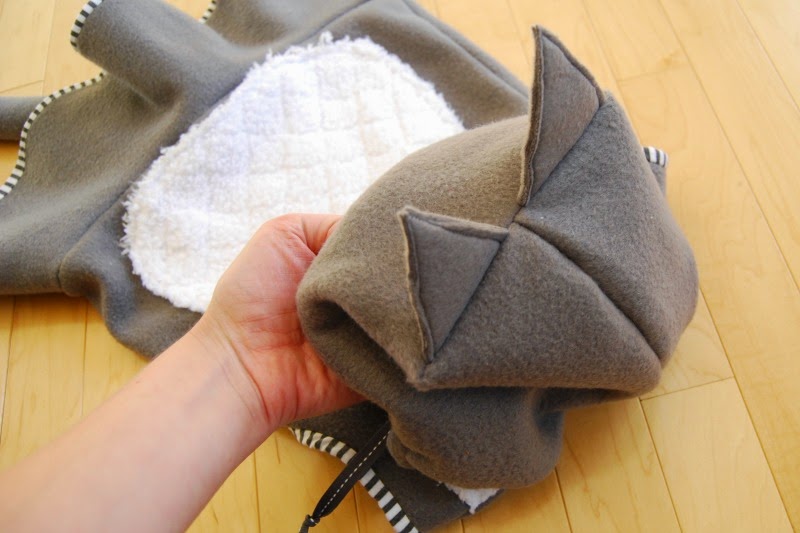 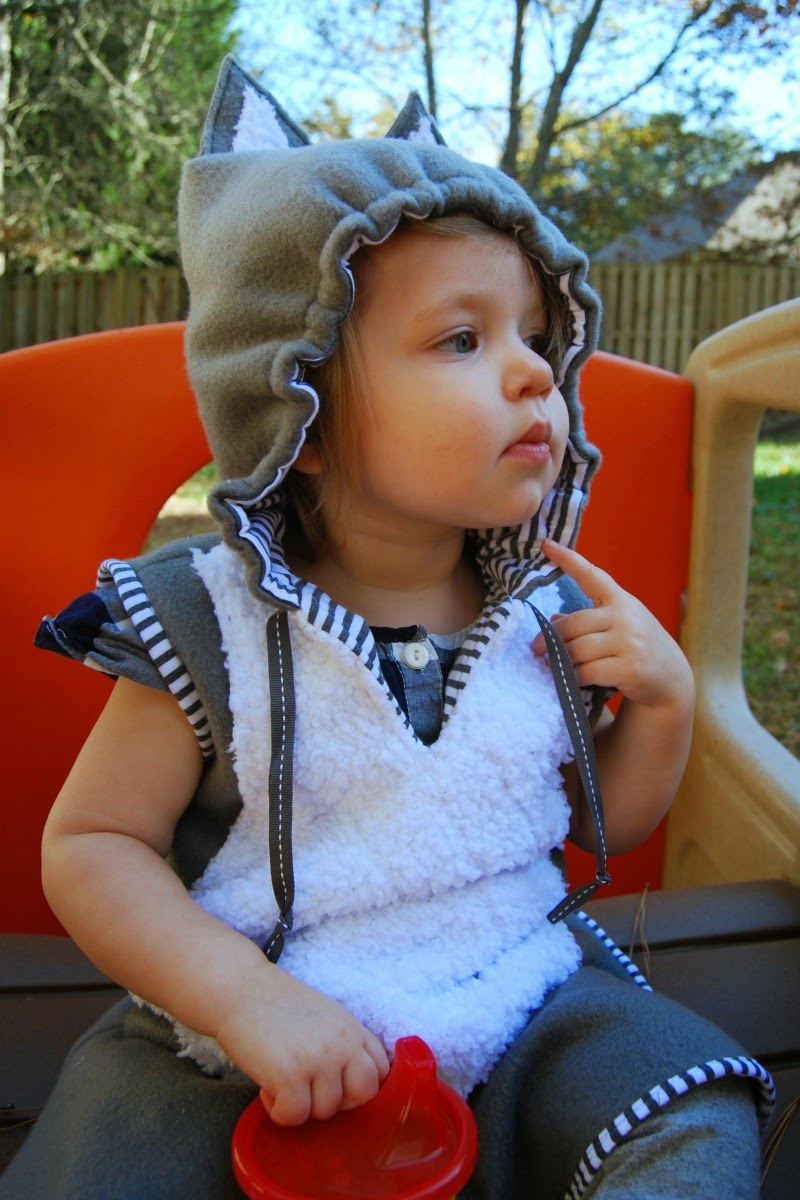 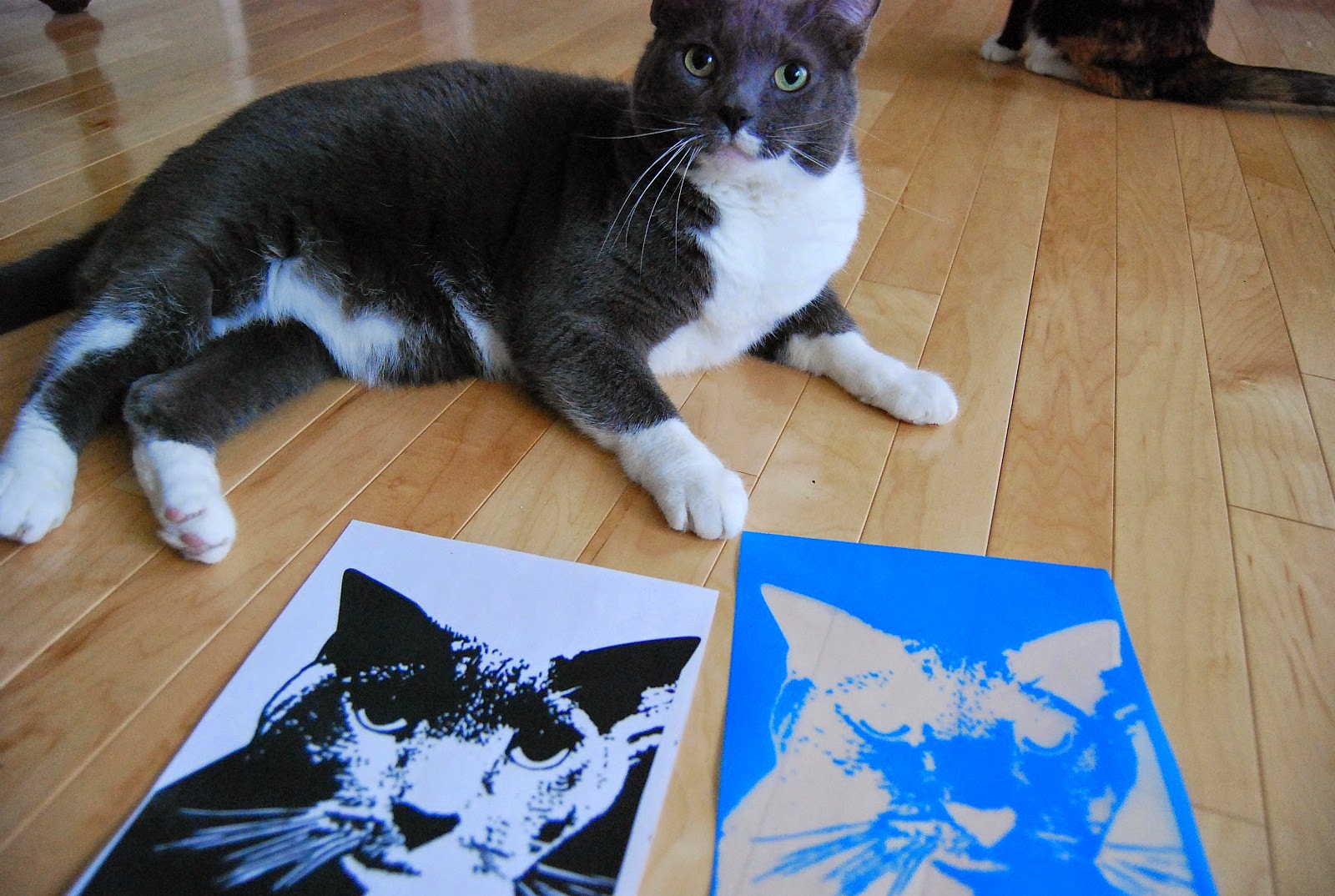 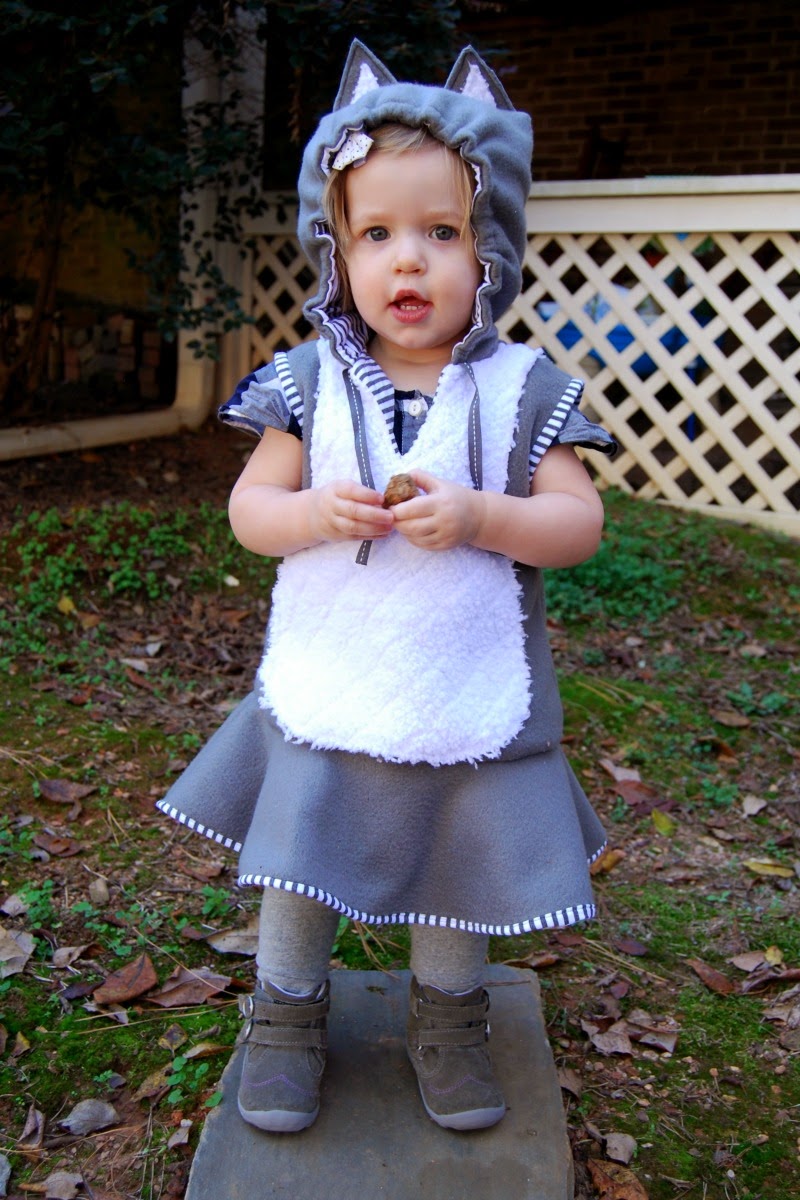 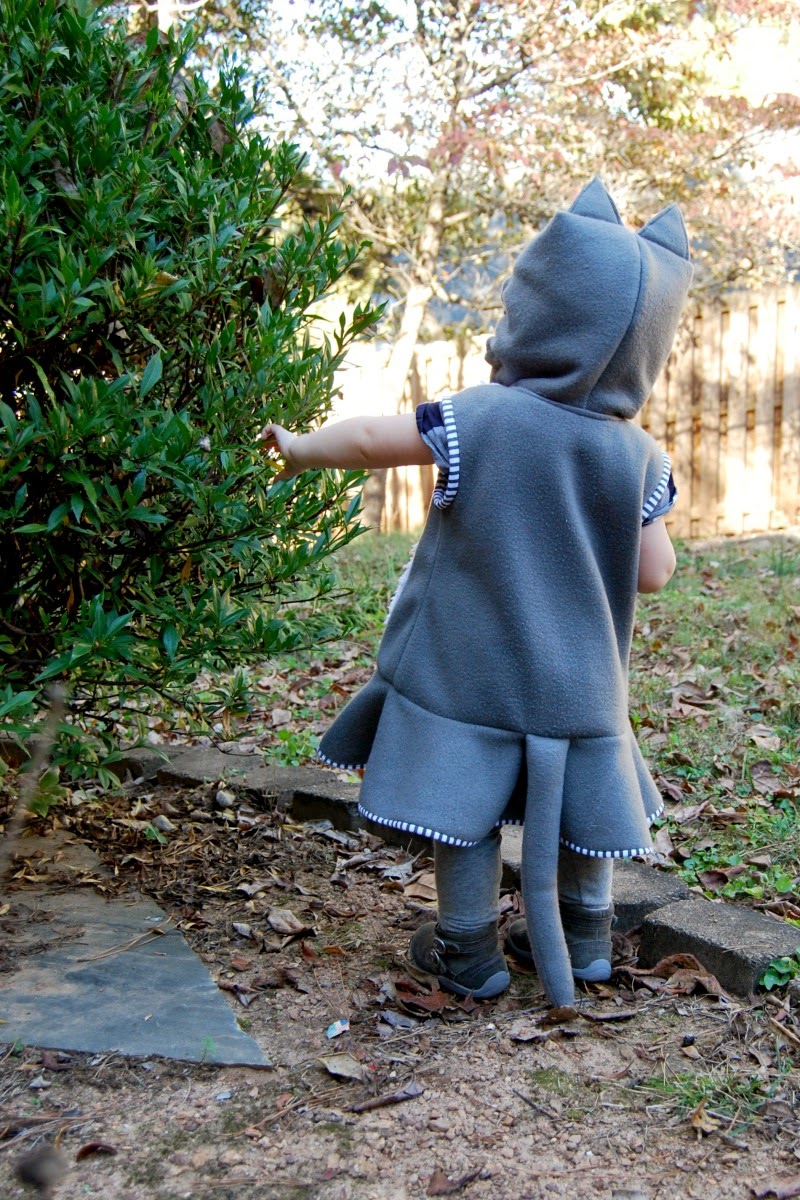 What about you guys?  Anyone else sewing any Halloween costumes this year?  Any suggestions on getting a cat to pose for photos with a grabby toddler?
Posted by liza jane at 10:39 PM 20 comments

You Win Some, You Lose Some 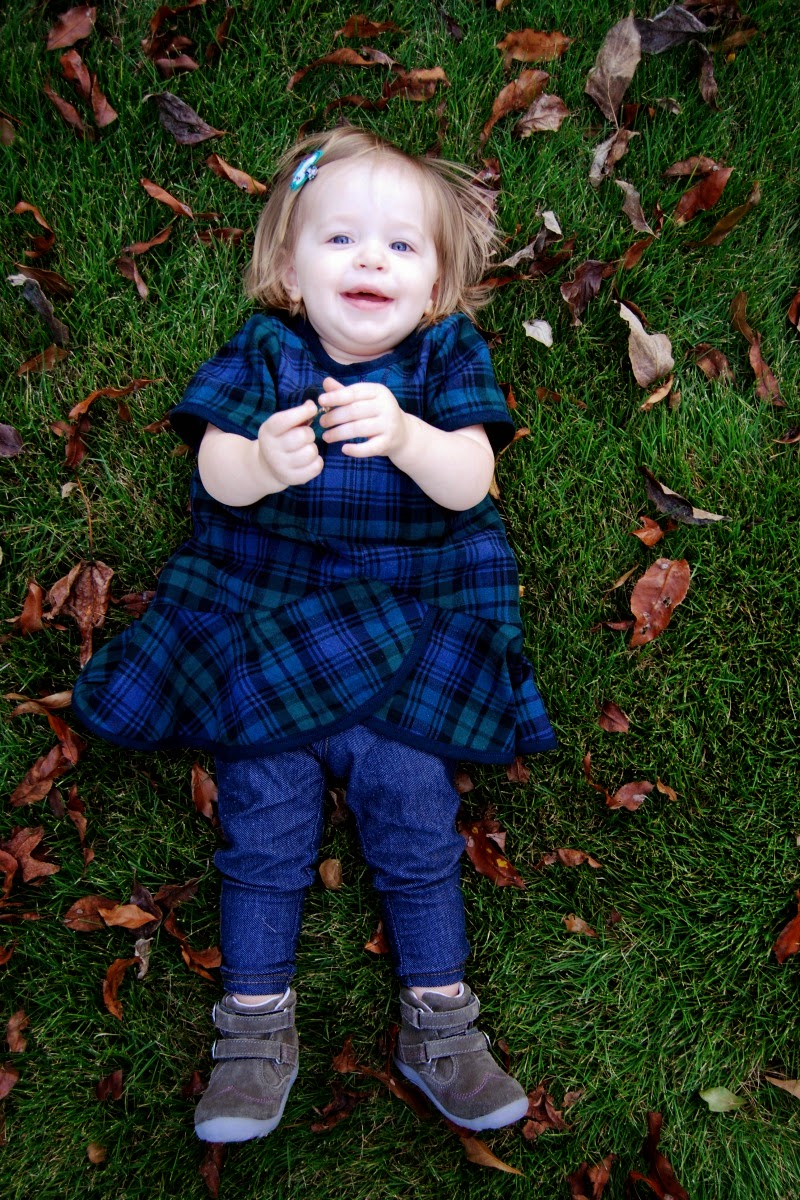 I'm starting off with a cute picture, but let me go in to the 'losing' part first. 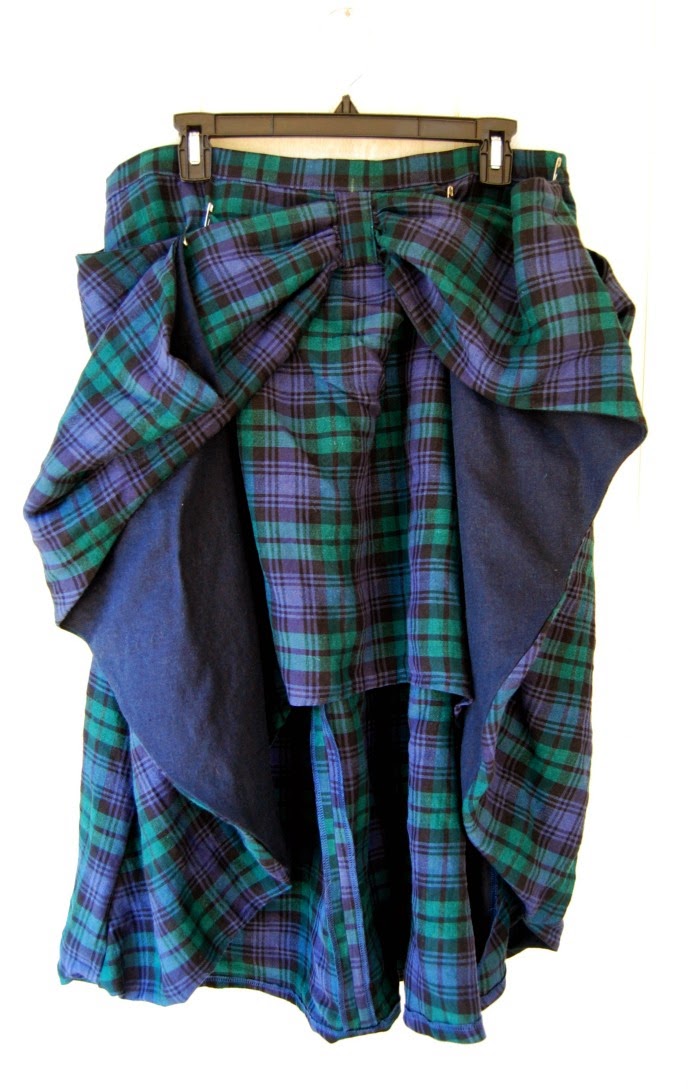 I'm embarrassed over how much time I spent working on this sad, droopy, horrendous skirt.  It's Simplicity 1366 in case you are wondering.  It's almost totally complete except for tacking the bow in place.  It's so, so incredibly frumpy.  I can't even believe that this amount of frump is possible out of such a cool looking pattern.  Just don't.  That's my only advice.  To be fair, I did some grading to make the pattern fit just using the flat pattern measurements.  I accidentally bought the lower sizes and I needed to grade up just a bit.  It is entirely possible that this sad, droopiness is my fault.  But, eh.  I'm still a little miffed.  I think the skirt would probably work in a wispy, super light-weight silk.  Anyway.  Moving on.  I am having a go at the top from the pattern.  That one seems to get pretty good reviews. 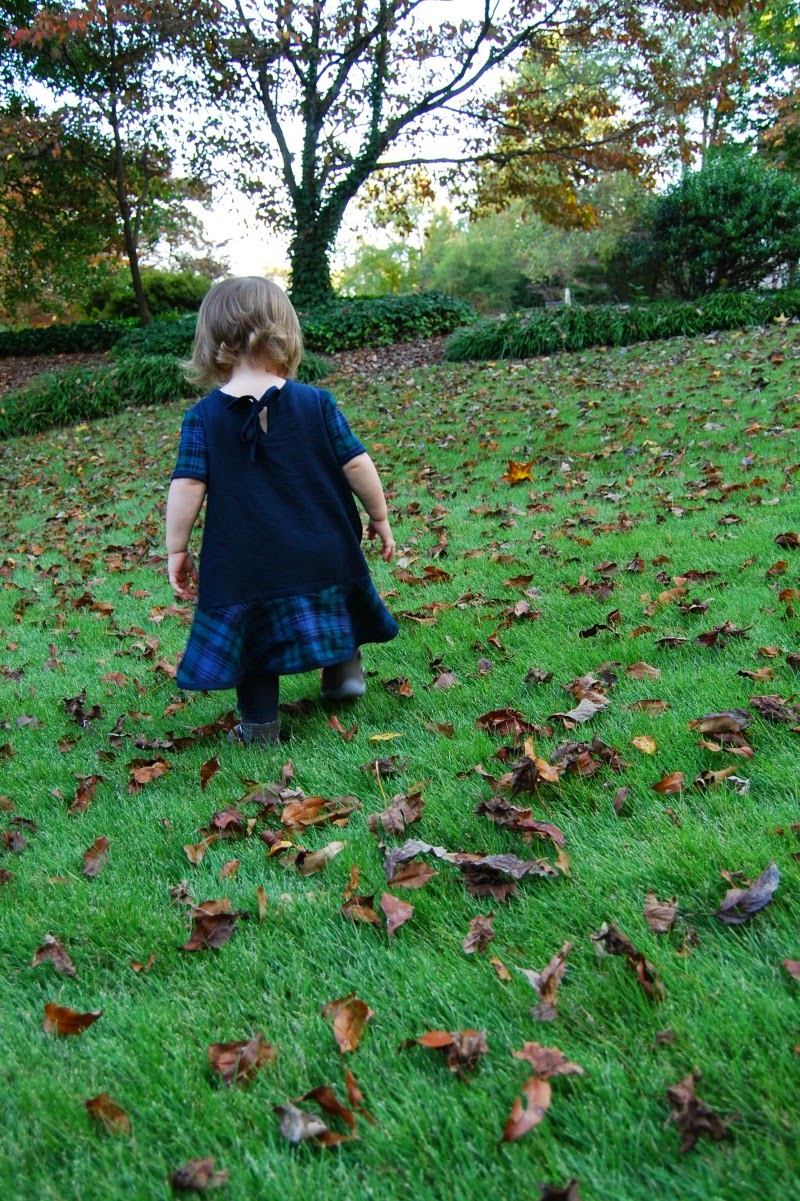 I'm still having lots of sewing fails.  I can't really put my finger on why I'm so dissatisfied with so many things I've made lately.  There are more but I'm not blogging them all.  My ratio is less than fifty percent right now.  Ugh.  However, when you need to rebound fast from a sewing fail- make something for a cute toddler (win!). 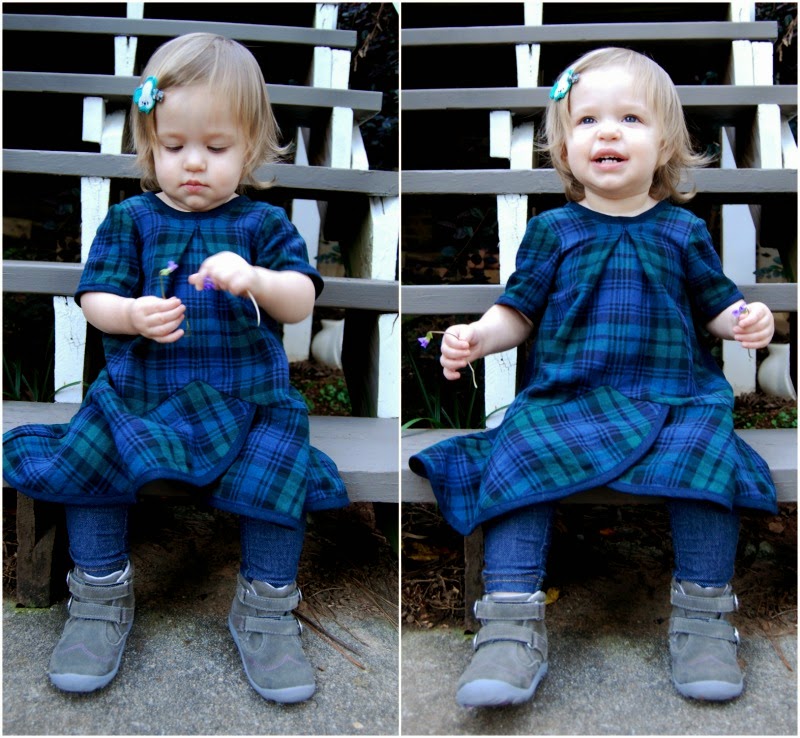 I have been hanging on to this blue watch plaid linen for several years now searching for the right project.  Which is why the skirt fail hurts so much.  I pulled out the teeny, tiny narrow scraps I had left and cut out this Oliver and S Pinwheel tunic for Jane to try and save some of that precious linen.  I had so little left that I had to piece the front and use the midnight blue for the back.  Which I really like.  And no matching of plaids here except for the center front seam I had to create. 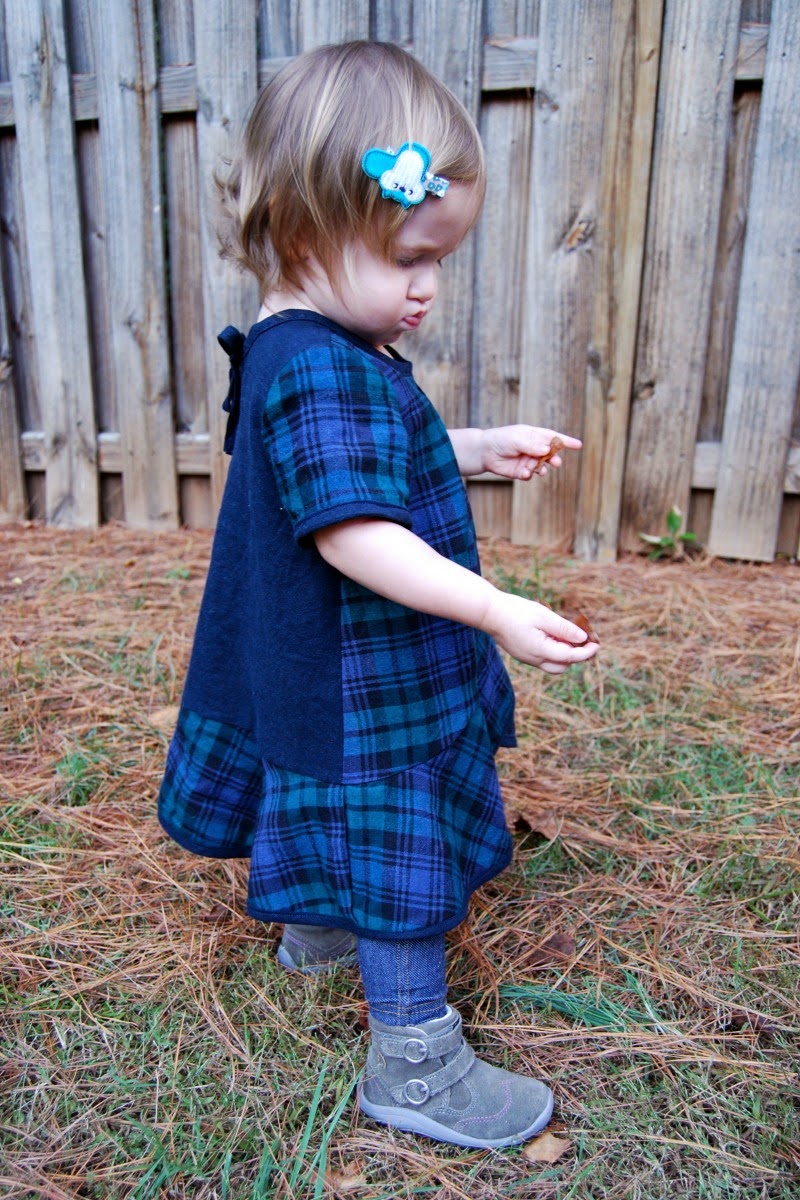 Oliver and S patterns are just fantastic.  I can't gush enough.  Especially after sewing the monstrous 1366.  I cut a size 2 which is pretty big on Jane right now.  She's eighteen months.  I originally sewed the binding around the neckline without thinking and turned it inside like a bias facing.  I realized my mistake and decided I wanted to fix it to match the bindings on the sleeve hems and flounce.  So I unpicked it (after it was under stitched and serged) and completely stretched it out.  Hence the inverted pleat.  I put the pleat in the neckline as a save.  And I like it ok.  I thought the inverted pleat sort of matched the vee of the flounce.  I think it ended up pretty cute.  Doesn't hurt that the most adorable toddler in the world is wearing it.  She looks ready for fall in her blue plaid and boots.  I also just extended the bias binding to make the ties at the back instead of sewing ribbon to close the keyhole. 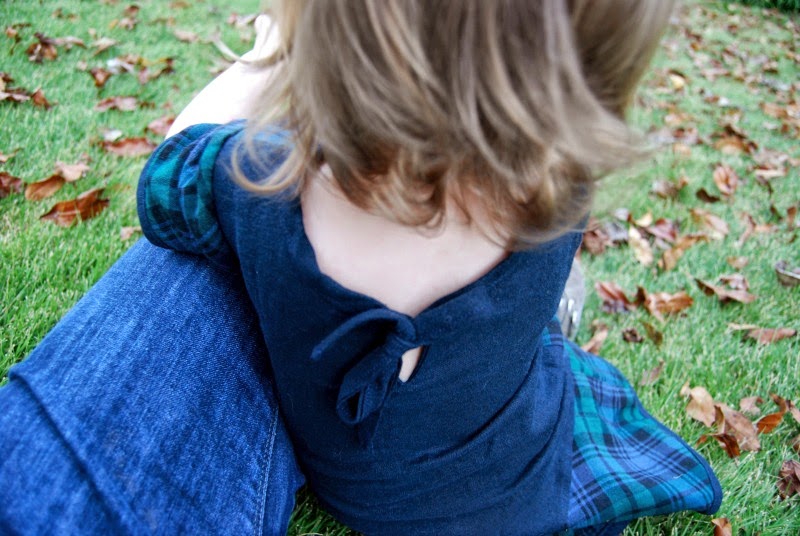 And now for picture overload.  Sorry (not sorry :D) 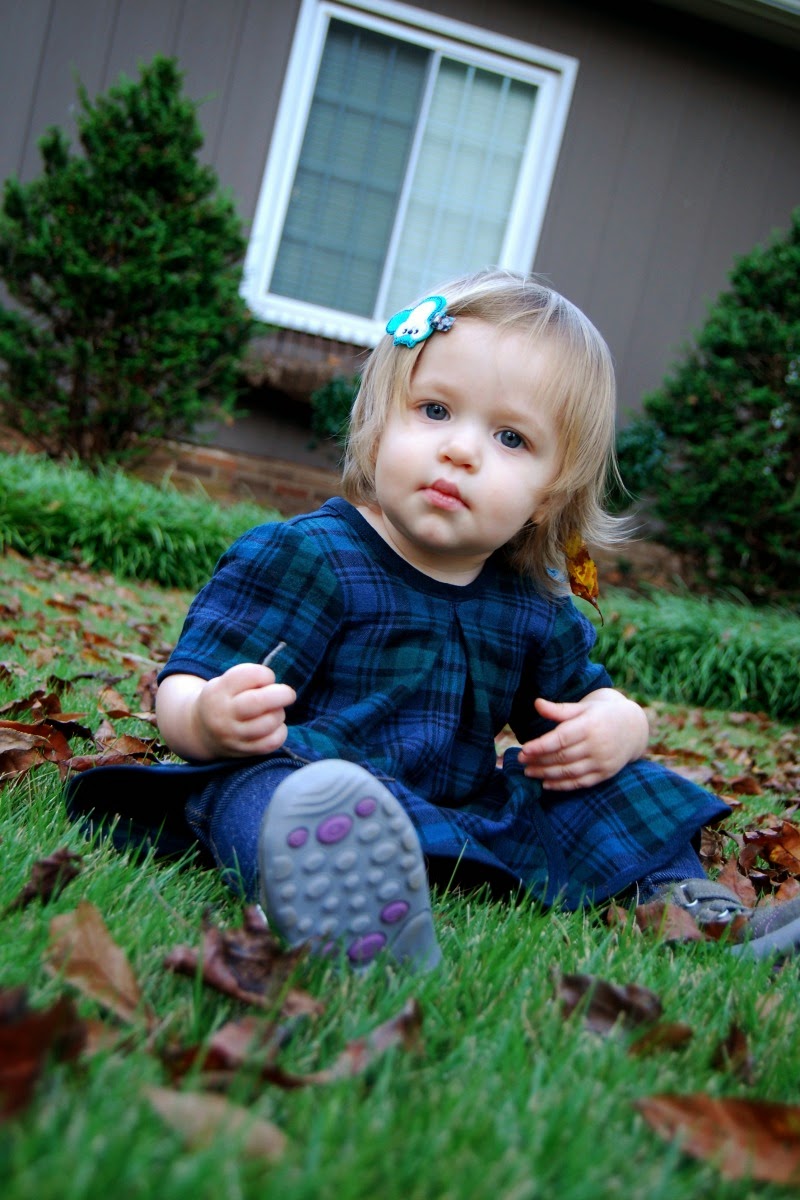 I love sewing, obviously, which is my main reason for keeping this blog.  But I also love that my blog documents all these little moments in time.  This was just another weekend that I snapped these photos of Jane.  I know I will cherish them forever. 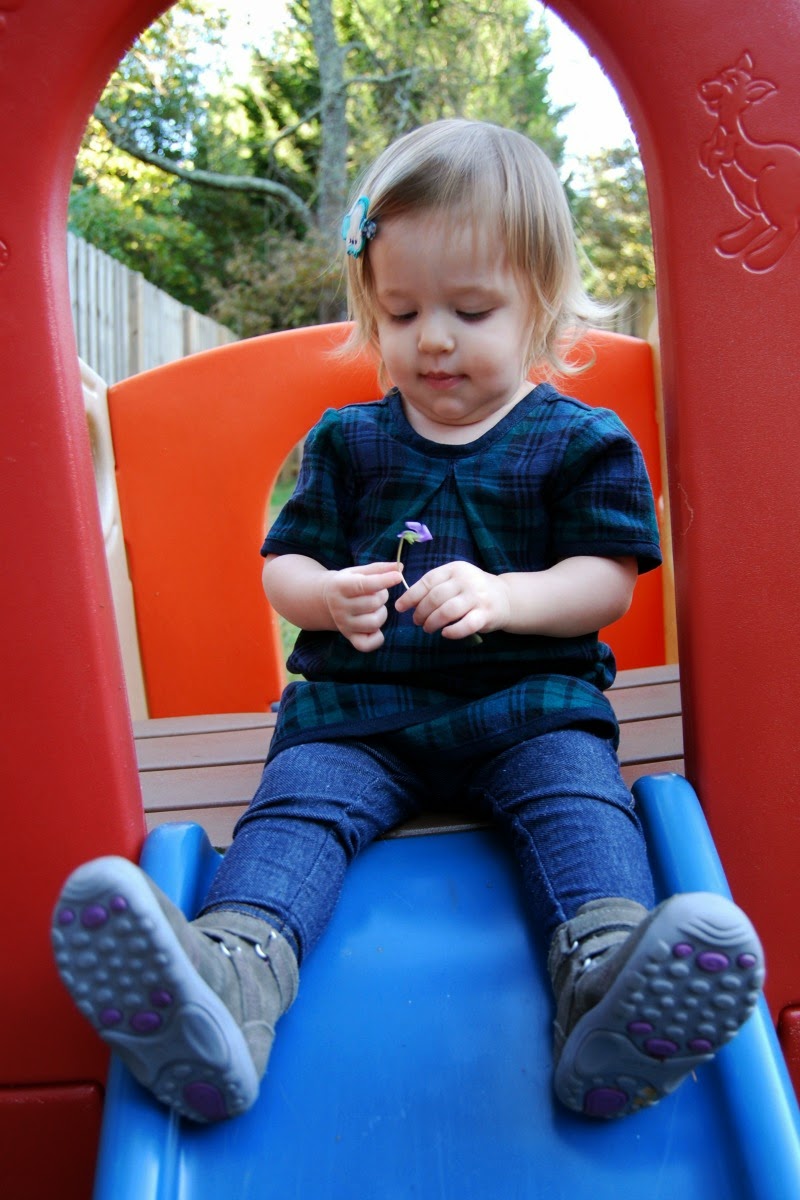 She is a doll.  And just for fun, here is a photo with illustrated sound effects. No.  No no no no no.  If I only had a penny for every time I heard that word come out of her mouth.  We have to try very hard not to laugh and encourage it even more.  It is hilarious.  But it is just about all she says these days.  I've been trying to teach her 'yes' but then it just sounds like we are arguing. 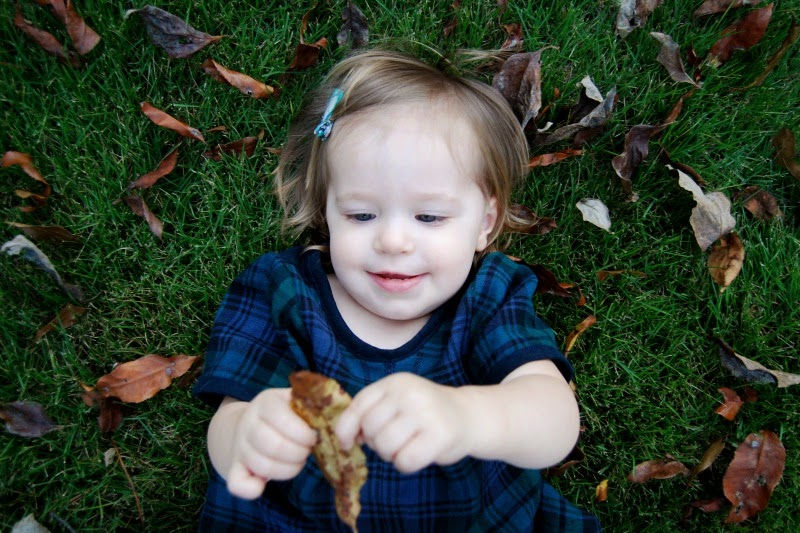