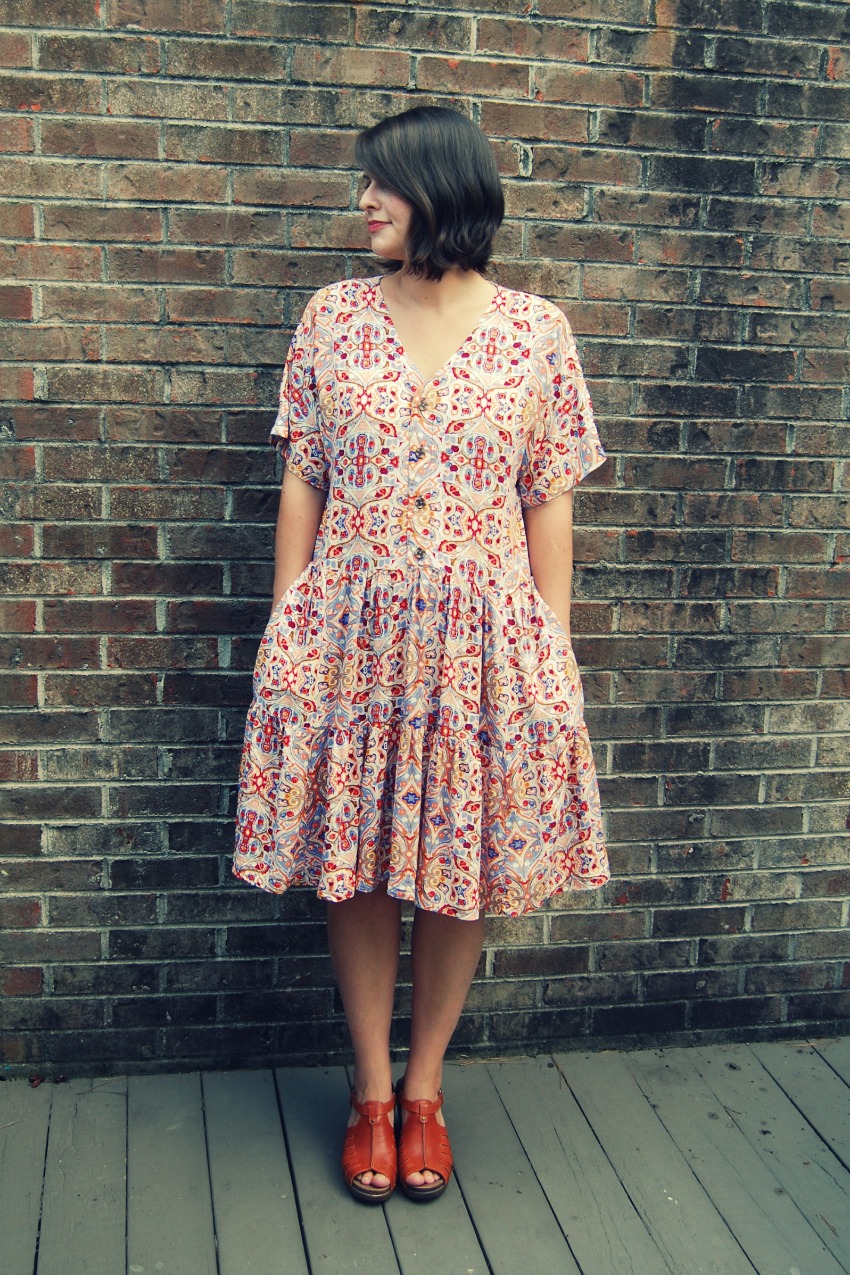 ...of McCalls 7115.  What is it with me and making things in threes?  It seems the last few projects have been done in threes.  The second and third versions are always easier than the first.  And I can apply some tweaks here and there.  Anyway, I won't write a ton about these two pieces since I reviewed this same pattern here- my denim dress. This is a simple, relaxed fitting pattern.  Once I tweaked the shoulder seam, I didn't have to really fit anything else.  There isn't any waist definition to this dress but for some reason it works.  Maybe because there is a seam there?  I love this version I made using a rayon poplin fabric.  I also just made my black culottes in the same fabric.  This was my first time using it, though.  I would say it drapes just like a rayon challis but is heavier and more opaque.  And there is almost a slight sheen to it.  I ordered this from fabric.com on a whim and was pleasantly surprised by the weight of it.  I don't need any sort of slip or anything under this dress.

I made view B, with the tiered skirt and cold shoulder detail.  Both of those design features get kind of lost in the psychedelic print.  But I like both nonetheless.  I did add an inch of length to both tiers.   The bottom tier of the dress is actually three pieces instead of two.  That wasn't apparent to me at first but I figured it out as I was sewing.  So my print placement is all over the place.  I also screwed up the print match at the front button placket a little.  I didn't stay stitch the neckline (and I can't remember if that is in the instructions- if it isn't, be sure to do it!) and it stretched out some from handling while sewing.  I had to shave a little off the front center to make the facing fit right and in the process messed up my perfectly matched print.  It's close enough.  I sewed the facing with a triple stitch again.  And I added pockets again, too.  This dress definitely needs pockets. 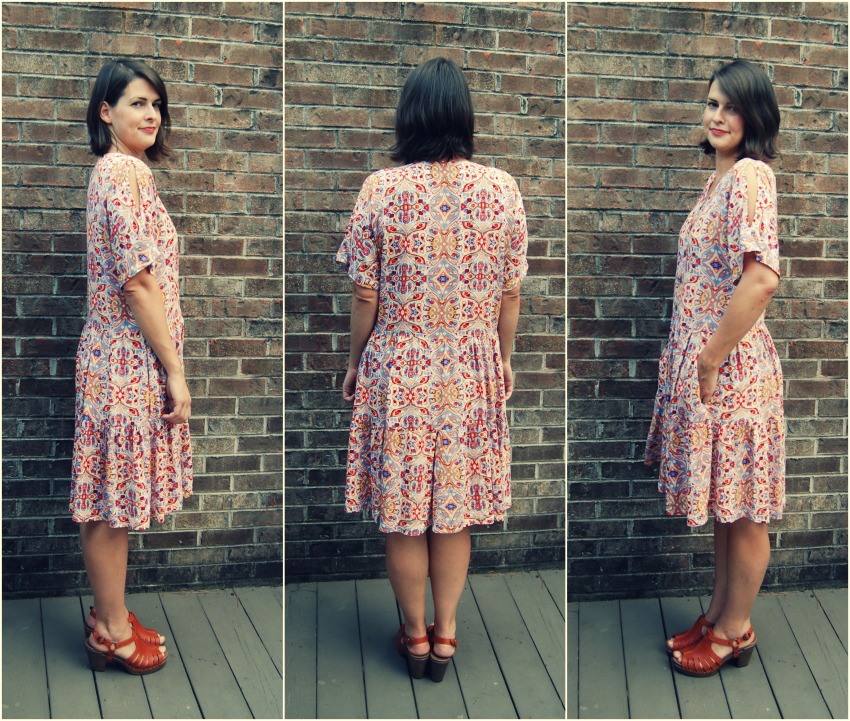 I put a filter on these photos because the colors were so washed out for some reason.  The light is changing.  But this photo below of the shoulder splits doesn't have a filter on it and is a good representation of the colors in the fabric. 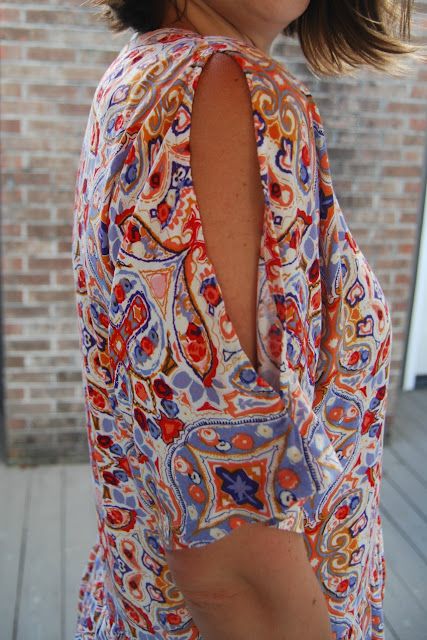 I did notice on my denim version that something was up with the hem.  There was a height difference in front even though I knew my hem was straight.  I thought maybe it was just the dress pulling backwards or something.  Valerie helped me figure it out and it makes perfect sense now.  When I made that shoulder adjustment to straighten out the shoulder seam, I removed a wedge of fabric.  I need to add that wedge back to keep the skirt from tilting up.  However, by the time I talked to Valerie about it, I had already made this dress and cut out my blouse below.  So both of these have that same tilt, though I think it's less apparent in fabrics with more drape.  If I make this again, (a fourth time!) which I might,  I'll fix it.  I'll add that wedge back in to the center front to make the skirt hang evenly. 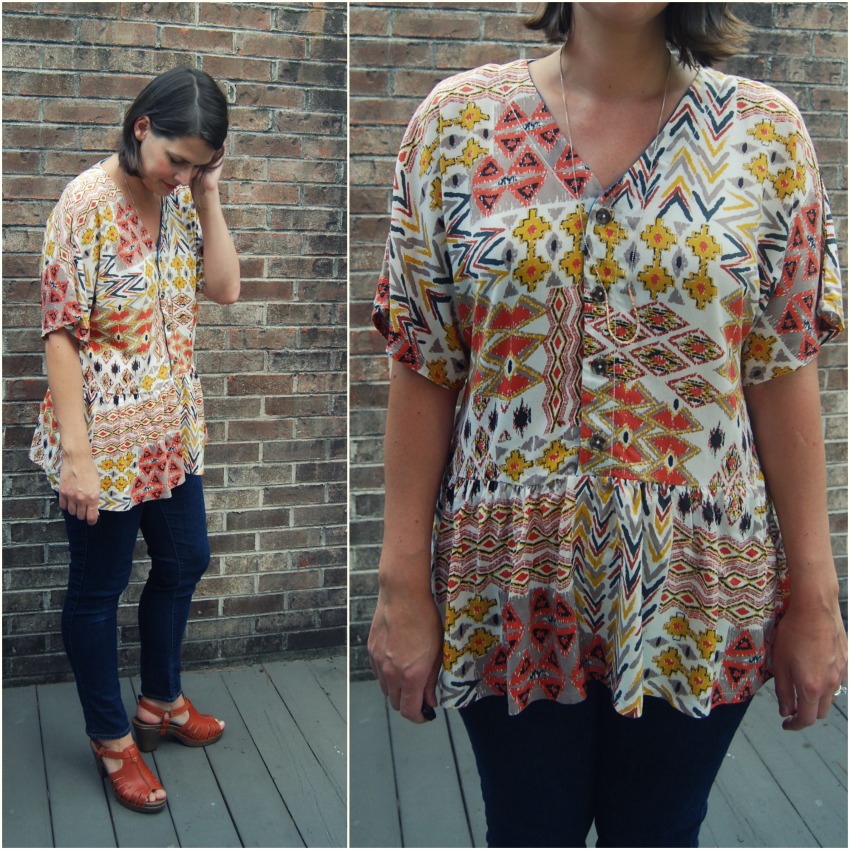 The blouse version is the same view, but just one tier instead of two.  It's a new favorite.  It's been worn to death since I made it.  In fact, one of my students pointed out that I had worn the same top the week before when I wore it this past week.  I see classes once a week, so they notice if you wear something twice in a row.  It's made in a rayon challis I found at Joann's that I love.  I tried to just balance the print on the front since it's so patchwork-y and failed.  Look at that yellow section that almost matches.   It think it looks fine, though. 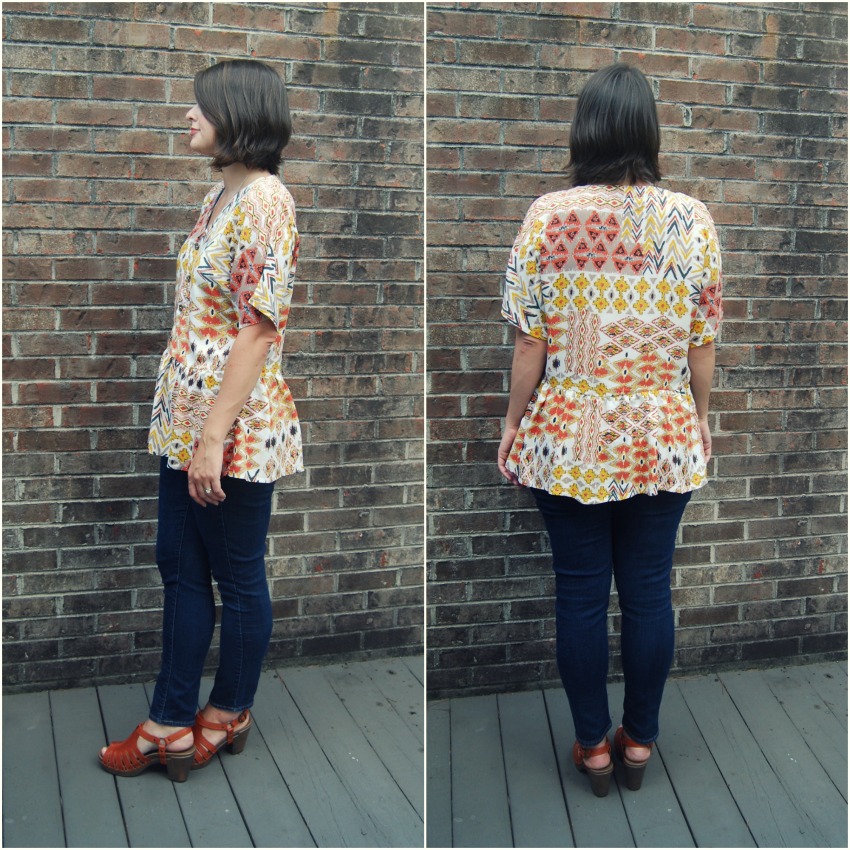 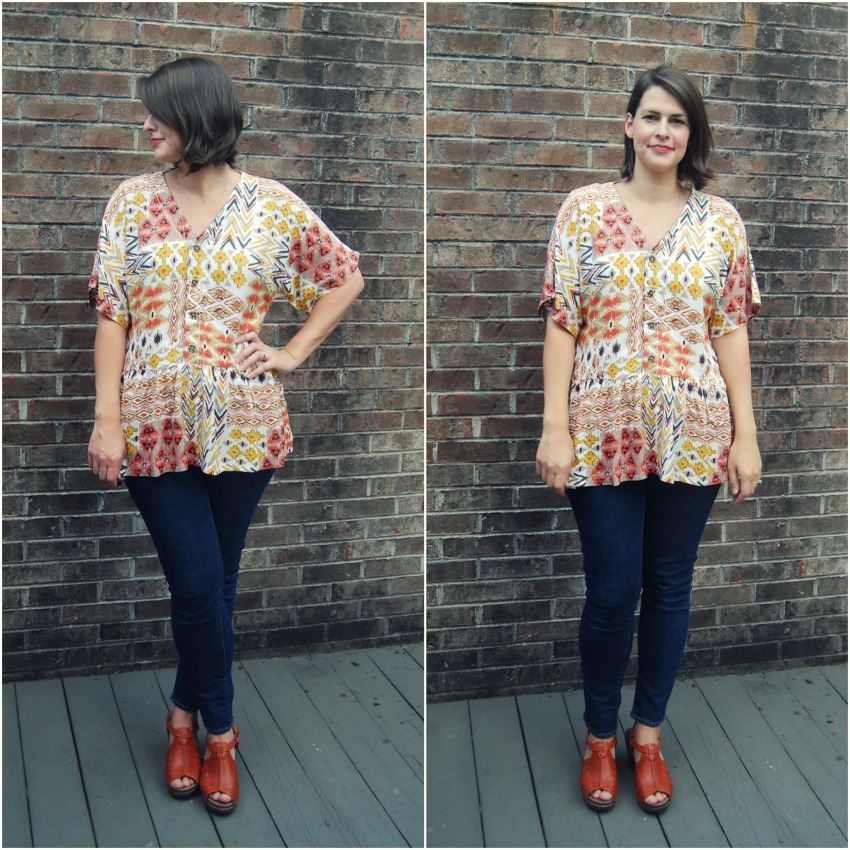 Anyway, nice and easy pattern.  I think I'm done with it for now that the weather is changing.  But maybe I'll pull it out again next summer.