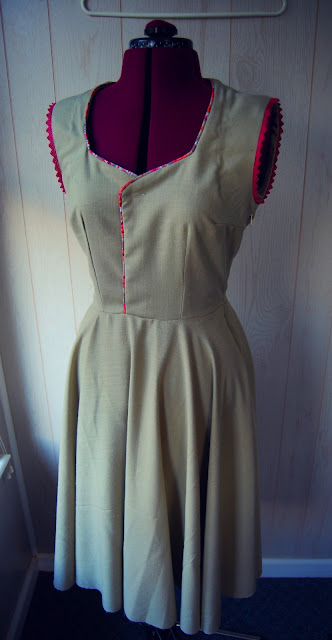 I have been completely stymied by this dress.   Here it sits, almost done but not quite.

It's a McCall's pattern from 1986.  Doesn't look very 80's does it?  I found it at the thrift store.  I've always admired circle skirts on other folks.  I thought I'd test out if I liked one on me.  It is a full circle.

This was intended to be wearable, but really it is just a muslin.  I don't usually make muslins.  Unless I intend them to be wearable.  I did a few alterations.  Same old square shoulder, lower back neckline that I always do.  The bodice fits well.  Darts are in the right place.  I like the subtle sweetheart neckline. 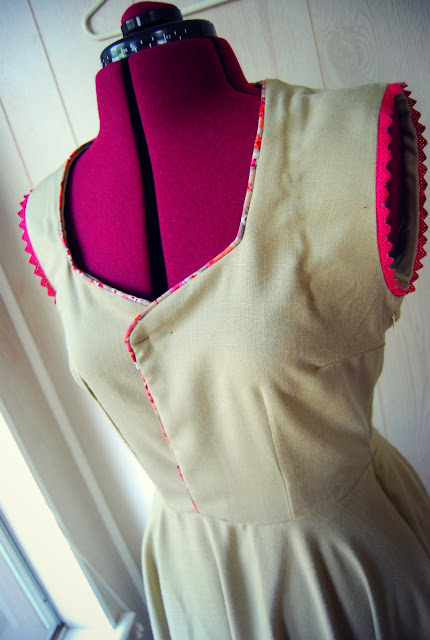 I used up some leftover lace trim at the armhole and piping at the neckline.  The fabric is also thrifted.  It looks like linen but it's not.  I think it may actually be drapery fabric.  There's no lining or underlining so my catch stitch on the facings looks horrendous.  I hate armhole facings by the way.

The problem is that I'm just meh about the whole thing.  The fabric, the trim, the silhouette.  It's been sitting on my dress form waiting on a hem and buttonholes for two weeks.  I can't bring myself to finish it.  And I can't seem to start anything else until it's finished.

Do I finish it?  Put it away and come back to it later?  I can't picture myself wearing it, but you never know.  I wanted to make a real deal version out of some seersucker I've had in my stash for a while.  But I'm not sure how I feel about doing that either.

I've found that I don't like to move on to something else until I finish what I've been working on.   This is a recent development.  I seem to be getting more compulsive with age.  I don't have any ufo's lying around.  I have some failed sewing experiments around but nothing I just didn't finish.   I know there is one project I cut out and never sewed up.  I guess that counts as a ufo.  What about you?  Do you have several projects going on at once or are you monogamous with your projects?

So I'm rationalizing giving up on it.  Someone tell me it's okay.
Posted by liza jane at 10:19 PM