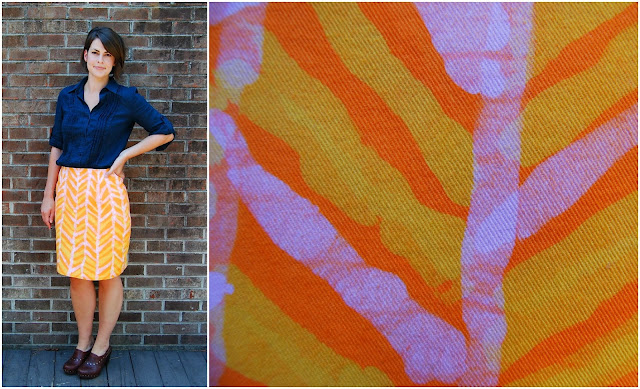 The most ultimate move in matching: My skirt matches my blog.

This is my best attempt at a detailed account of how I made this batik skirt.  I'm labeling it a tutorial though really it is just a step by step of how I did this.  Like I said before, I like to take the simplest approach and do things 'elementary school style'.  This is just a documentation of that process, more so I can have a record of what I tried, what worked, and what didn't.  I definitely see myself trying out more batik and dye experiments in the future.

I was going to start this post on my latest batik adventure talking about how easy the batik process is.  It is a simple process BUT it takes some time and forethought.  And  (this is a big and) you have to have a lot of equipment.  Not anything fancy, but many of my kitchen utensils have now been officially categorized as dye equipment.  Oops.

My first step in the process was dyeing my white cotton bull denim pink.  This is where I made my first major mistake.  I used a liquid Rit dye (petal pink) because I already had it.  Later, I used cold water dyes.  The pink Rit dye didn't make it through the very last step and I think I understand why now.

I "rough cut" my pattern pieces from the pink denim.  I just wanted to have a general idea of where to place my design on the skirt but I knew I would have to trim to the exact pattern pieces before I sewed up the skirt.  I used my straight skirt pattern.  Just two pieces to worry about. 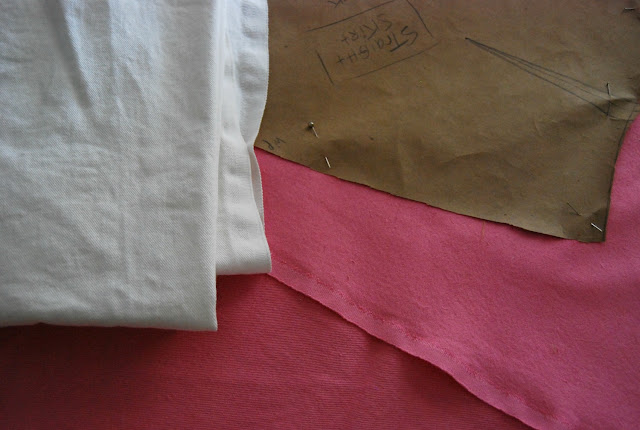 Here's my set up in the garage.  Like I said before, I heat and apply the wax out in the garage.  There are some fumes from the hot wax that can be harmful.  Plus the smell tends to give me a headache after a while. 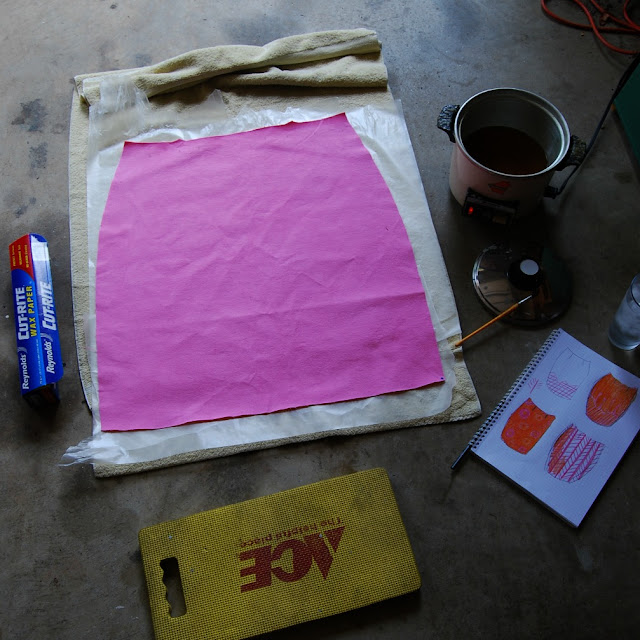 The wax is a beeswax/paraffin blend.  I heat it up in an old rice cooker.  Be careful when heating wax!!  I like the rice cooker because it melts the wax and then I switch it to 'warm' while I'm working.  The melted wax should never get to the point of smoking.  I apply the wax with paintbrushes.  I don't stretch my fabric, just lay it out on wax paper.  I didn't draw anything out on the fabric ahead of time but I did have a few sketches to refer to.  It's an accident that the design is kind of a zig zag again.  I was actually thinking about feathers when I planned it out. 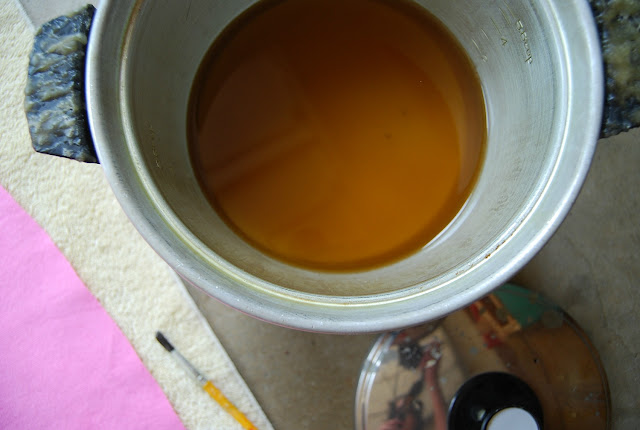 Applying the wax with a brush is tedious.  You have to keep dipping and working in small brushstrokes.   Maybe I'll invest in some actual tjanting tools at some point.   The wax has to be hot enough to penetrate the fabric. You can tell that it's penetrated when it looks translucent.  You can also check the back of the fabric later on and connect any places that didn't go through.

I put a little blue dot on the front piece with a sharpie to differentiate between the two when I was working.  Not that it really mattered since both pieces are pretty similar. 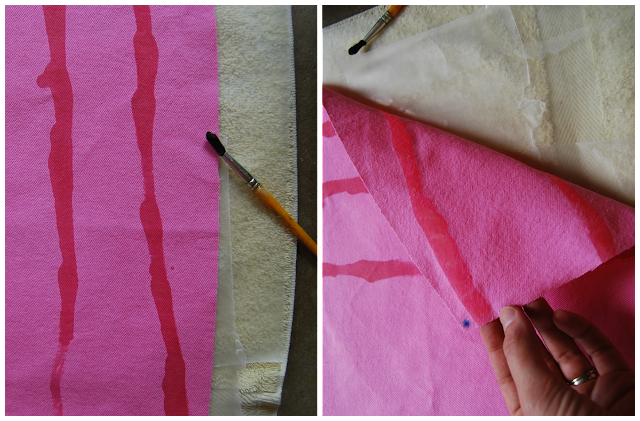 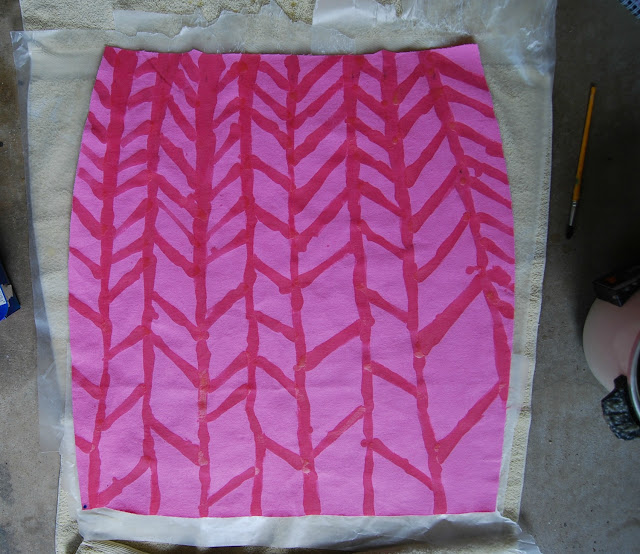 After I was done with my first round of wax, I let it cool completely and took it inside to dye it the first color.

One piece of equipment that was absolutely invaluable was that red bucket.  Anytime I had a dirty measuring cup or spoon or anything, I could throw it in the bucket to keep my mess contained.  I wore gloves when I rinsed my fabric and I was extremely careful when I measured out the powdered dye and soda ash.  It would probably be smart to wear a mask during that step. 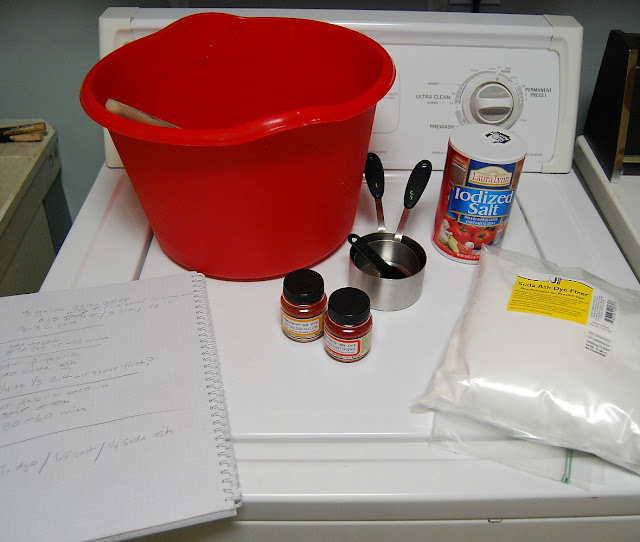 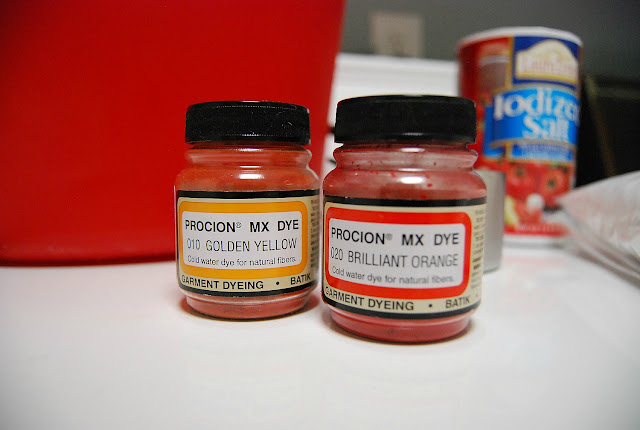 I didn't stick to exact measurement when I mixed up my dye baths because I wasn't concerned with having exact colors.  I filled my slop sink with enough water for the fabric to float around freely and then added 1 1/2 cups of salt.  I mixed up one tablespoon of dye powder with a little bit of water in a separate container and made a paste to keep it from getting lumpy.  Then I added the paste to the water.   I used the golden yellow for the first round of dyeing. 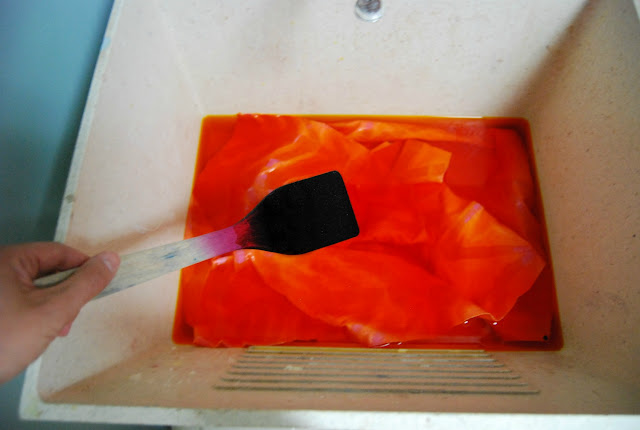 Next I put in the fabric and stirred it around for about 10 minutes.  Then I added a 1/4 cup of soda ash.  From what I understand, soda ash makes the dye solution alkaline which is what makes the dye permanently bond to the fibers in your fabric.  This is as far as my artist brain got in to the science of it.  I just know that the dyes came out brilliantly permanent in the end. 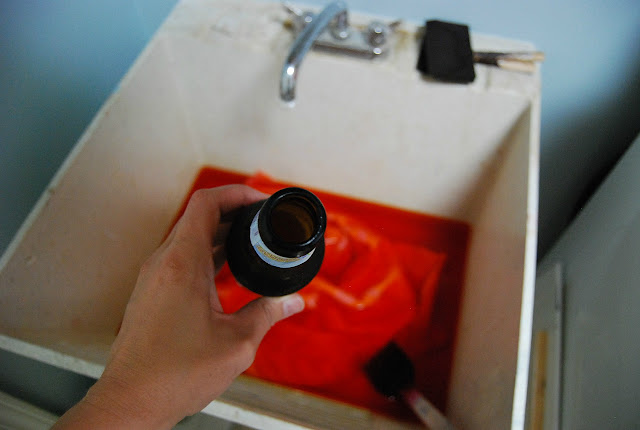 Then I stirred the fabric on and off for about 30 minutes.  It helps to have a beverage during the step.  I rinsed the fabric until the water ran clean, which was not very long.  Whenever I rinse fabric after hot water dyeing it seems to take forever for the water to run clear.  Not the case with these dyes. 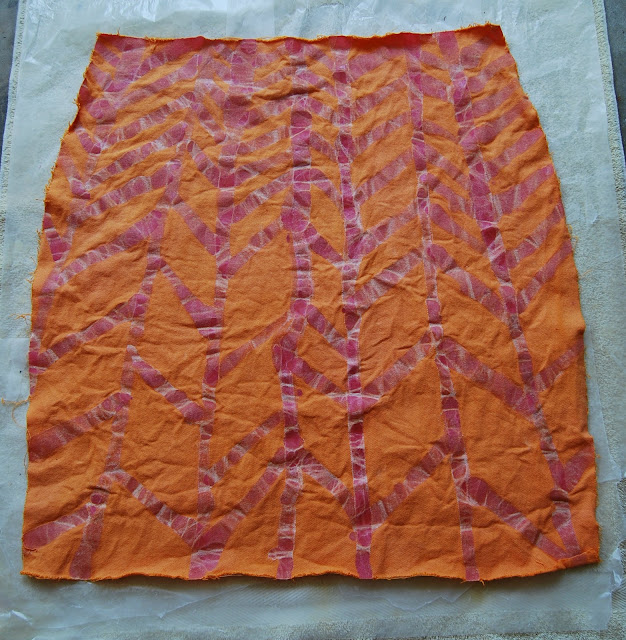 This is what my fabric looked like after the first round of dyeing.  I'll say it again, I was so impressed with the brilliance of the fiber reactive dyes.  I let the fabric dry overnight before I did my second round of wax.  And this is where my pictures got pretty sparse.  I think I was tired of documenting on day two :)- 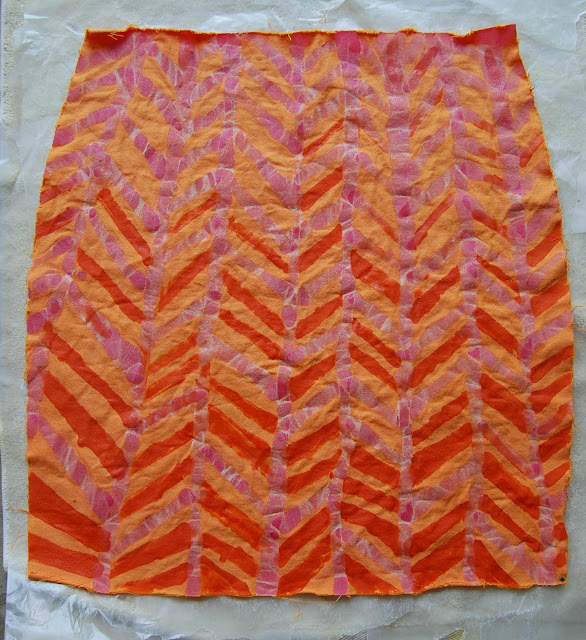 I added more wax and tub dyed the fabric again using the brilliant orange.  I used the same recipe: enough water for fabric to float around,  1 1/2 cups of salt, 1 T of dye powder made in to a smooth slurry before adding to water and 1/4 of soda ash to fix dye.

This collage below shows the fabric after the first round of dyeing (golden yellow) in the top two photos.  The bottom left photo is the second round of wax and the bottom right is a close up of the fabric after it was dyed brilliant orange.  I was a little worried at that point because I couldn't see the golden yellow underneath the second round of wax lines. 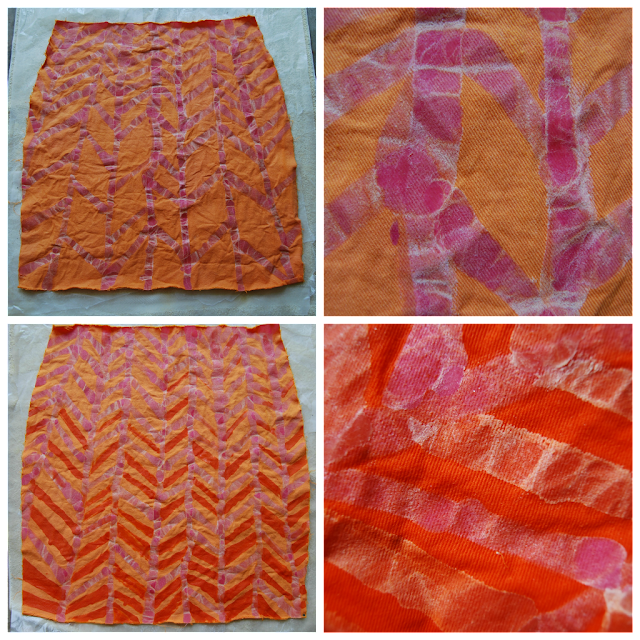 The last step, wax removal,  is where the pink dye disappeared.  There are several ways to remove wax.  Before, I used newsprint and an iron. This time I boiled my fabric.  I went to Walmart and bought the most gigantic stock pot I could find.  I filled it with water and waited forever for it to boil (you know what they say about a watched pot...)  Then I put it in the fabric and watched all the wax float up the surface like magic.  It was so cool!  The melted wax floats to the surface where it stays.  You have to keep your fabric below the wax while it cools.  Then you can peel off the layer of wax and take out your beautiful batik fabric.  I had to let the pot cool overnight.  The best part is that you can reuse the wax you removed from the fabric this way.  Waste not, want not.

The bad news is that the pink hot water dye I used initially did not survive the boiling.  Makes sense.  The heat is what supposedly bonds the dye to fiber in a hot water dye, although I've yet to find a hot water dye that is completely permanent. 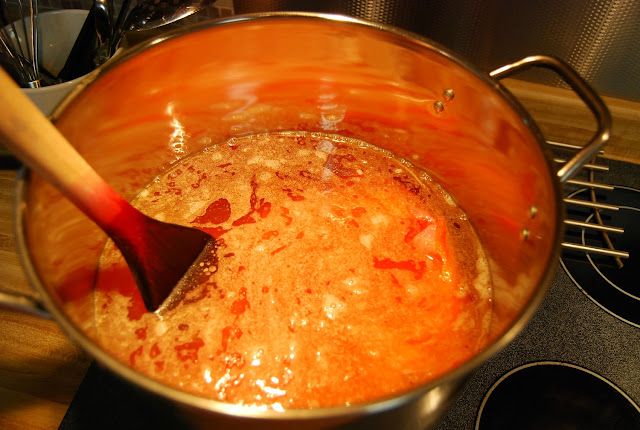 All the pink boiled away and left behind the golden yellow and orange.
Pink or no pink, it's still pretty neat imo.

There was some dappled sunlight on the fabric in the photo below and it made the orange look saturated.  It's not as bright in real life. 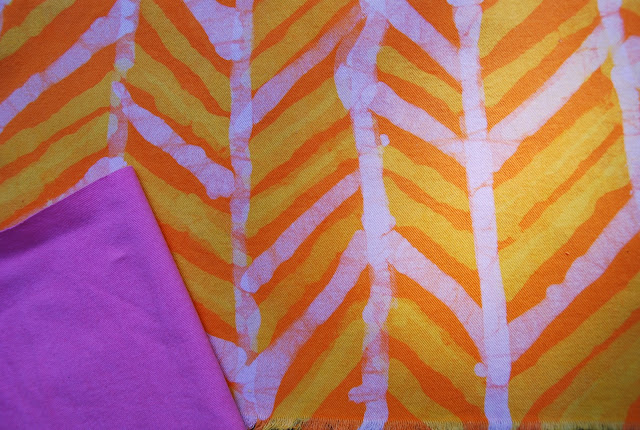 The fabric is super soft and supple.  No trace of wax at all, unlike the ironed version.  I'll definitely be boiling again, but not using any hot water dye.  I think it's only fiber reactive dyes for me from now on.  I cut my pattern pieces and sewed up my skirt afterwards.  What do you think?  Can an art teacher get away with wearing a skirt like this?  I hope so.  Because I'm going to wear it anyway. 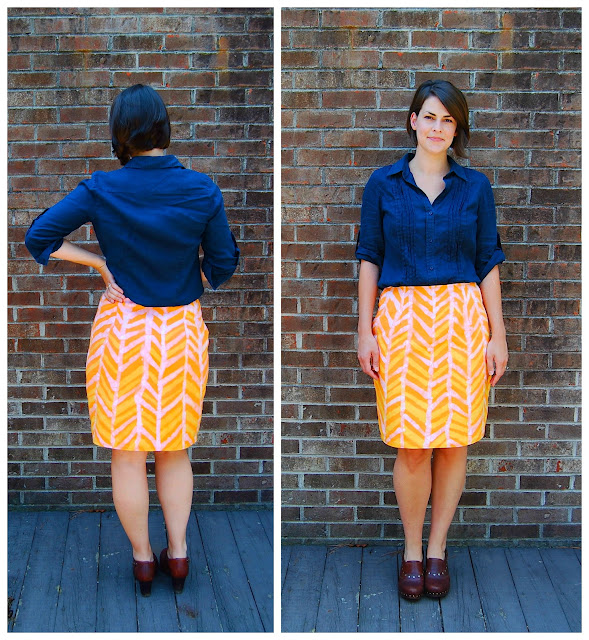 Now I have one more length of bull denim to use up and one more technique I want to try.  So there may be more batik experiments in the near future!