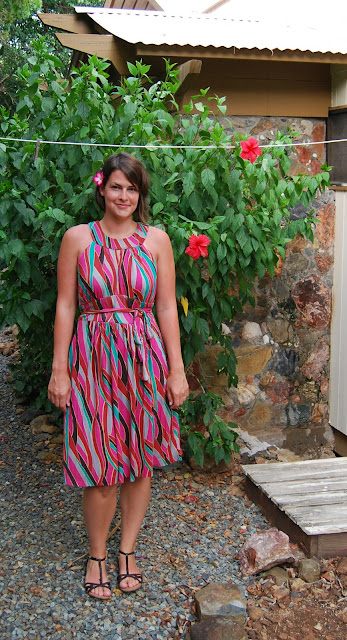 I'm fresh out of creative titles.  This will have to do.  This dress is my last me made item from vacation.  And it's probably my least favorite of the tropical things I made.  I had major issues while sewing this dress and I'm not exactly sure the cut is flattering on me.  But you better believe I made sure to wear it at least once after all the frantic late night sewing I did right before we left.  I actually brought my seam ripper on vacation with me and took out all the gathering stitches and some sloppily placed elastic I put in to try and fix the floppy waist at the last minute.  I ended up making a tie belt with the one lone piece of fabric I had left.  The one positive of making this dress was that I used every scrap of fabric I had.  No scraps leftover on this one, which is always a good feeling. 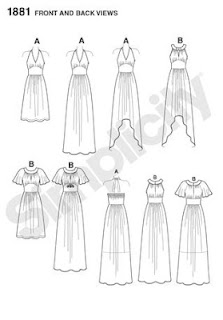 I used Simplicity 1881.  Holy cow, this is a time consuming pattern!  I thought I'd be able to whip it out in plenty of time before our trip, but I was sewing down to the wire to finish before we left.  There was so much gathering and matching of seams.  It was a never ending project.  It was definitely more involved than I imagined.  I made the version with the high neck but just used the shorter skirt.  I initially wanted to do the maxi but didn't have enough fabric.  This pattern was... interesting.  I feel like the version I made is more suited for a woven, yet the pattern calls for knits.  I used an extremely cheap printed jersey which probably had to do with some of my dissatisfaction with the pattern.  It was very wiggly and thin.  I battled with all those gathering stitches and curved seams.  And all the gathering stitches left little white holes after they were removed.  The zig zag stitch was my friend on this project. 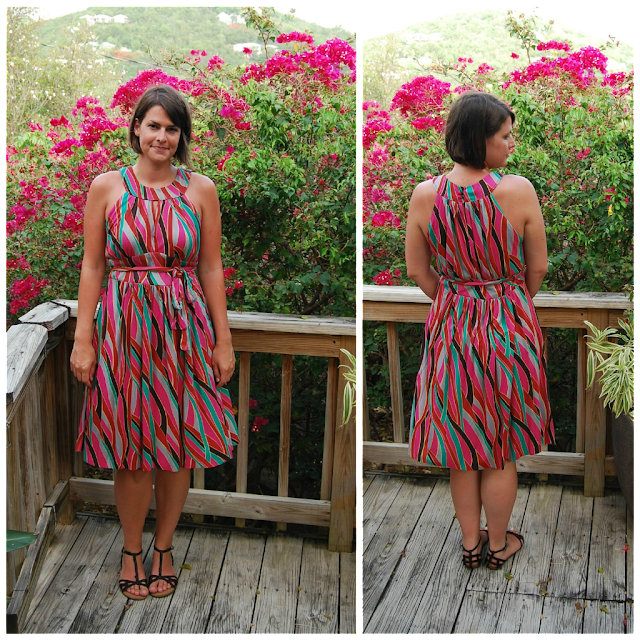 The pattern calls for a side seam zipper but I left it out.  I think zippers in knit dresses are strange, unless it's a stable knit.  I used a fusible tricot for the neck band and midriff.  It was the only way I was going to get those curved seams to turn out.  I was disappointed with how much ease the midriff ended up with.  I can see that the curved midriff would be extremely flattering if it were fitted just right.  But it sort of made me feel floppy and wide when it ended up too big.  I discovered this just mere hours before we left so I attempted to fix it in slapdash fashion.  I first tried zig zag stitching elastic along the back midriff seam lines.  It looked horrendous.  Then I went for a belt, which does the job but I don't love it.

My other qualms with this dress involve the cut of the bodice.  I think it looks just like the pattern intends it to, I just don't like it on me.  It hits right at the widest part of my back.  Maybe if the armholes were raised slightly I'd like it better.  Also, after watching Project Runway the other week, I keep thinking souffle boobs. (I hope typing that doesn't come back to haunt me, Google search!)  That's not a good thought.  I do like the back closure with the two buttons. That's fun.  All in all, it's a comfy jersey dress.  It was perfect for the hot temperature in St. John.  I wore it out to dinner one night.  I think now it will go in the magic closet for a while.  Maybe I'll decide I love it next summer. 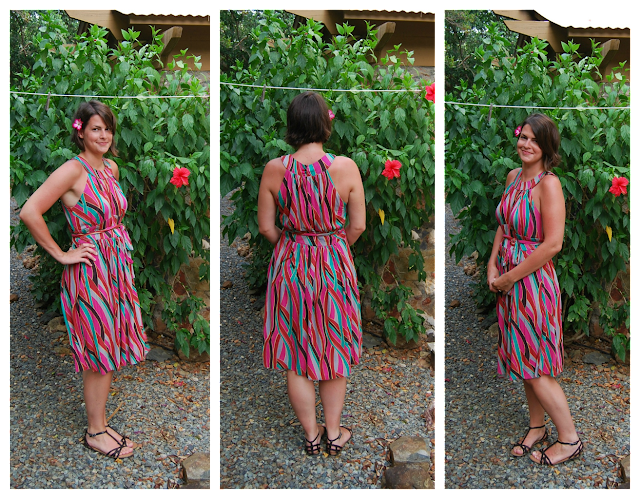 Now back to real world sewing, friends!  No more tropical vacation photos.  I'll be visiting these posts in the dead of winter, I'm sure :)