Ok, ok.  I am ousting myself.  I get excited about graphs.  Something about seeing information visually is really cool.  It's totally on the opposite end of the spectrum of what I actually do for a living.  But there was a part of me that loved Statistics in college (especially Educational Statistics).  Weird for an artist, I know.  I have enjoyed reading everyone's end of year posts (Gillian, your Top 5 idea was awesome!).   Though I'm really not a sentimental person.  I don't look back very often.  I am a firm believer in always looking to the future.   But Molly's graphic approach to her 2012 sewing data pumped me up.  I fired up my work computer (which I brought home over break because I swore I was going to get some work done....) and tried to refresh my Excel skills.  I haven't had to use it in years.  On a side note, Excel sure does look different in Microsoft 2010, doesn't it?  Took me a bit to figure it out.  I'm dating myself, I'm sure.

Here is my end of year data in all it's nerdy, graphic glory!  I made a grand total of 47 projects. Not too shabby.  I did quite a few home decor and crafty projects that I counted as well.  If I sewed it, it was included in the data.  I love looking at everything from this point of view because I get so much information about my productivity.  That's good knowledge to have.  Especially when my future sewing time involves also taking care of a babe. 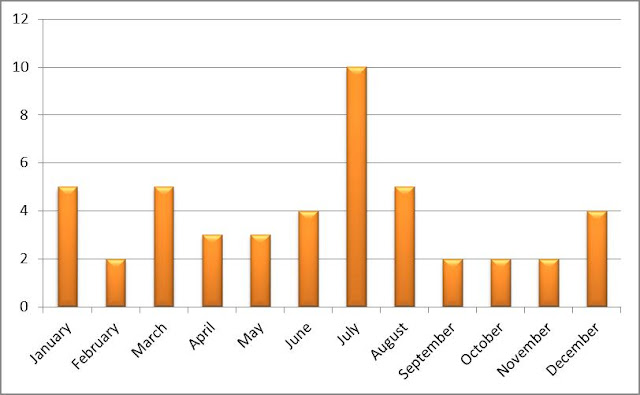 My first chart is number of sewing projects by month.  I was more productive in the summer.  No surprise there since I get eight weeks off then.  And what went on in July?  I have no idea how I churned out so many projects that month.  That was also the month this little baby was created.  Hehehe.  Twas a productive month in many respects.  My productivity dwindled in the fall due to being newly pregnant.  But I managed to make something every month.  I also noticed a shift in my use of knits then, as well.  I seem to have been a little more productive lately.  It's true what they say about getting some energy back in the second trimester. 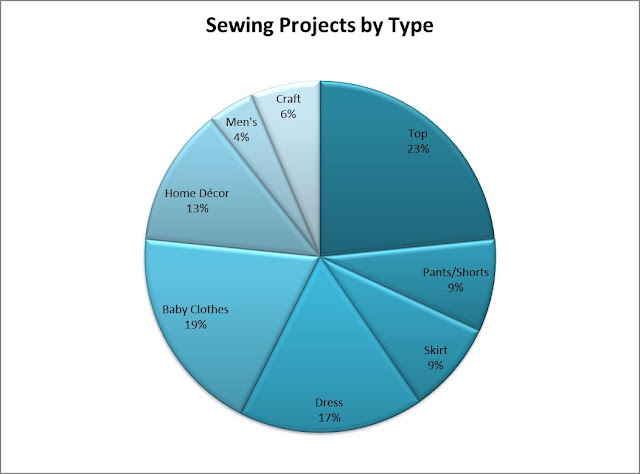 Not sure why this chart has a title and none of the others do.  I did quite a few home decor projects early in the year.  I consider the sofa to be my biggest accomplishment of 2012.  It was completed in February, though I spent almost the entire month of January working on it.  I like sewing for the home.  Truly, I like variety.  I also noticed that I sewed a lot of baby clothes.  And no baby of my own yet!  All of the baby items I sewed were for friends or coworkers babies.  I love me some baby gift sewing.   Something about sewing miniature cutesy things is so satisfying. 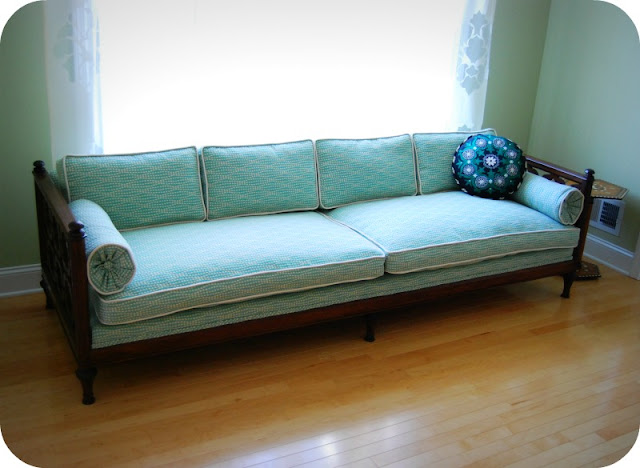 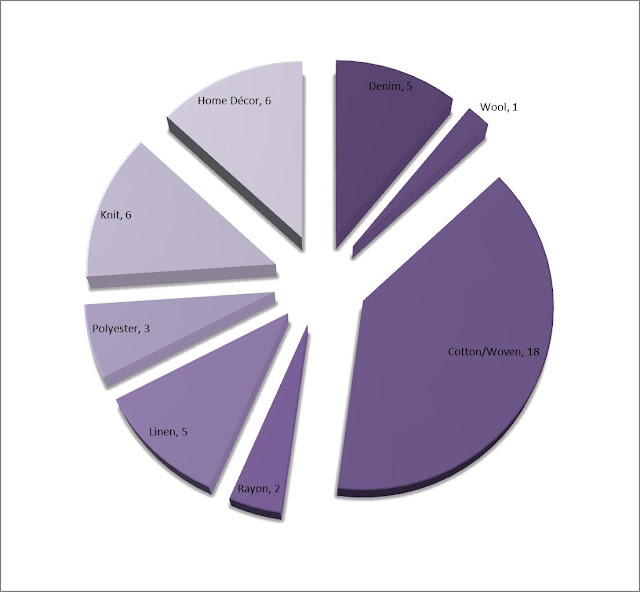 Next chart is the type of fabric I used for my sewing projects.  I used a lot of cotton wovens.  I labeled that category to describe all sorts of wovens I used that were mostly cotton; seersucker, batiks, shirtings, etc.  That's pretty self-explanatory.  They are easy to sew with.  The polyester category was surprising, although one project was a craft project and the other two were fails.  What does that say about poly?  I love linen, so I'm actually surprised I didn't use more than I did.  I'd love to push myself to sew with some different types of fabric in 2013.  Um, silk would be nice.  But I'm also on a strict fabric diet, so that may be difficult.  I will be sewing from my stash whenever possible in the next year.  I predict that there will be a lot of pink frilly cotton things sewn in the future. 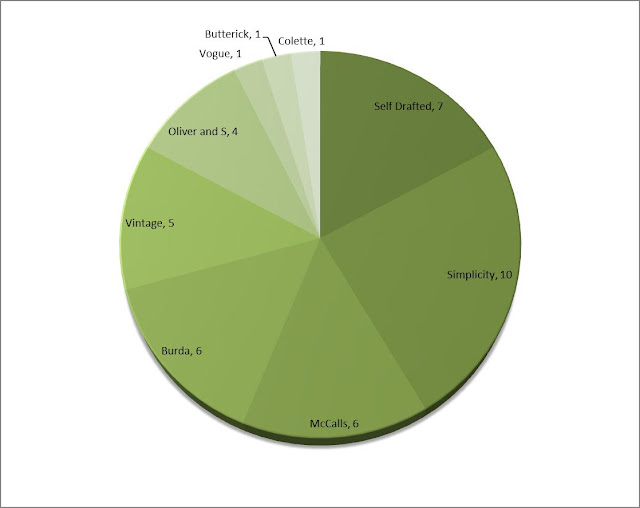 And the last chart is sewing project by pattern.  I didn't include my home decor projects in this chart since they didn't really require patterns.  Just measuring.  I guess I like Simplicity patterns!  I probably own more Simplicity than anything else.  They seem to go on 99 cent sales more often than Vogues or Burdas.  I was pleased to see I actually had a category for self drafted.  Though all of those projects are either a baby robe or an a-line skirt.  The Oliver and S category is misleading because all four of those projects were popover dresses for baby gifts.  I counted each project individually.  I would love to sew some other Oliver and S patterns in the future.  All in all, I'm happy about my year.  I see from my graphs that again,  I like variety.  That's generally how I am with art as well.  I consider myself to be a jack of all trades, master of none ;)  My only sewing goal for 2013 is to manage to carve out some sewing time while taking care of this new baby.  I don't want to let sewing go to the wayside since making is so important me.  I don't foresee that happening, but you know... I'm determined to make it a point to keep sewing.

Lastly, I just want to say thanks so much to all you lovely folks out there who read my dorky ramblings.  I can't tell you how much fulfillment I get from sewing and being a part of this online community.  I truly enjoy starting my day (and usually ending it, too) reading your sewing blogs also.  Like others have noted, sewing blogs are organic, rich and exciting reads.  It's real life.  So much better than any magazine or newspaper I could pick up. I love that I've made online friendships and connections with kindred souls all over the world.  It's a great feeling.

Wishing everyone an awesome 2013 full of nothing but sewing successes.
Posted by liza jane at 11:59 AM