Stenciling as a Glazing Technique 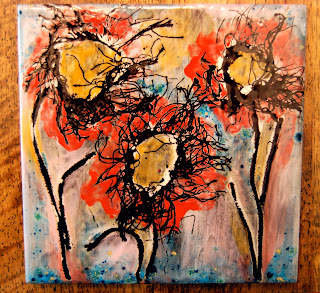 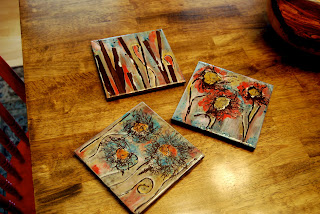 I made these tiles at the very end of the past school year because I had some extra space in the kiln during the last firing of the year and free samples from Mayco. (Art teachers love free samples by the way Mayco!) I actually took a glazing workshop at a mini-conference in March and made the one tile with the blue flowers. We did it step by step in the class, so it's not the most creative thing I've ever done, but I was really pleased with the result and it was a good learning experience. They had a lot of left over materials so I claimed two more bisque tiles and I made the other two tiles using the same techniques.

Here is what I did; first the entire tile was coated twice with a brown Foundations glaze. Then different types of string, twine and raffia were laid down on the tile and also coated with the brown Foundations, enough so that the items would stick where I wanted them to. The flowers were created using that yarn with all the curly pieces shooting off of it. Mayco provided everything in a little kit, so like I said, not the most creative thing I've ever done. You could use anything as a stencil that is thin enough to take a layer of glaze and stick to the tile. The string and raffia became the stencil. Then I used several Stroke and Coat glazes on top of the Foundations glaze; antique white, orchid, hot tamale, dandelion, and the blue I can't remember, and a little bit of a Jungle Gems blue on top. When all the top coats were almost completely dry, I pulled up the string and raffia revealing the brown glaze underneath. I fired the tiles at cone 05, which is pretty much what I always fire at. 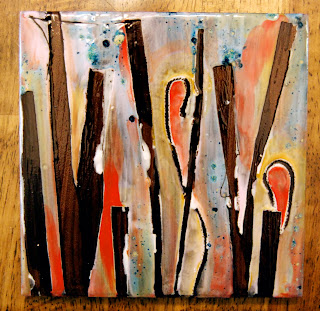 They turned out so lovely! I put some felt pads on the bottom and use them as coasters. They look great on the coffee table and I've received lots of compliments. I'm brainstorming some sort of stenciled glazing project that I can do with my students this year and different materials we could use. It would be a nice way to talk about positive and negative space. 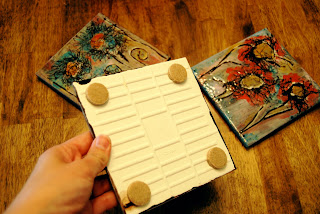 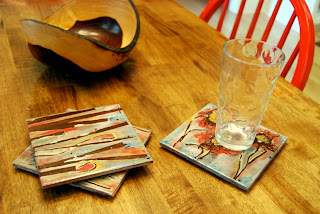