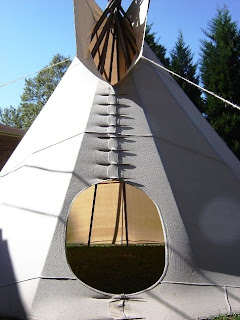 I posted this project on Burdastyle back in December, but I thought I'd post it on this blog as well because it is the reason I started sewing--- yes, a tipi is the reason. My husband decided that he was going to make a tipi. It was his dream since he was little. He showed up one day with an old sewing machine and some canvas drop cloths. I had previously told him that I learned how to use a sewing machine when I was little. I think I made a couple of pillows and an elastic skirt. So, I sat down and surprisingly remembered a lot about how to sew. It came back to me, with a lot of trial and error, of course. I decided that I was going to sew some of my own projects and I haven't stopped since. 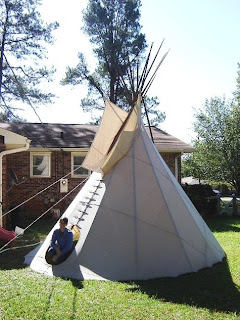 He worked on the tipi for about ten months. He sewed everything himself. I gave the initial lesson on how to use the sewing machine and helped with all the measuring involved. He made it in my old place, which was a tiny condo. The canvas was 30 ft long and my place wasn't even long enough to lay it all out. We took it across the street to a church parking lot to measure and cut. It is enormous. When the tipi is set up, it is 16 feet in diameter. The poles were made by hand as well. He split two by fours down the middle and then used a draw knife to turn them in to a pole. The poles are 20 feet long- two 10 foot pieces connected in the middle by a piece of pvc pipe which he painted to match the poles. The smoke flaps are functional, so we could feasibly build a fire inside (we haven't tried that yet). It's made to take camping, but we haven't done that either. We think it will sleep 6-8 people. The cover folds up and fits in a big Rubbermaid container. 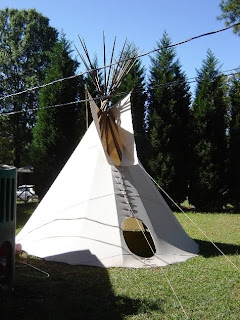 We recently moved in to a new house, but we haven't set up the tipi in the backyard yet. We're scared that might cause a Home Owner's Association meeting that we're not invited to, if you know what I mean. 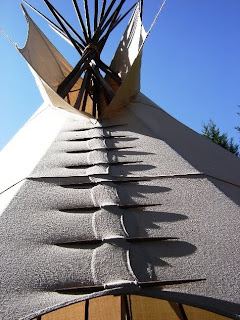 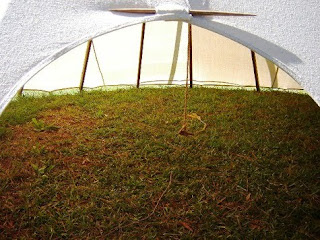 The book he used was called The Indian Tipi by Reginald and Gladys Laubin. It has plans and patterns to make a historically accurate 19 ft tipi. He sized all the measurements down to 16 ft, so there was a lot of math involved. There is also a book, Tipis by Linda A. Holley that has really nice instructions for lots of different size tipis and explains how to sew strips of canvas together as you go so you’re not pushing 30 ft. of canvas through your machine. The old machine was burned out during the process and then we got a basic Singer. He used heavy duty needles and thread, but just a regular sewing machine. 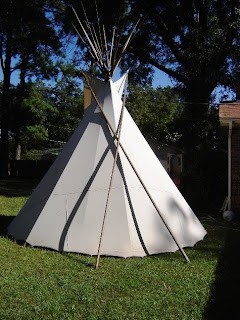 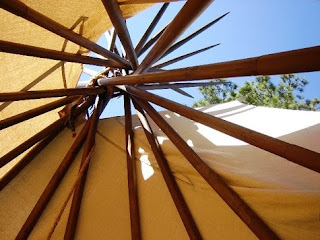 I think it's pretty impressive! How many people do you know that have a tipi? It's a great reminder of how I began sewing and also, as someone pointed out on Burda, what a useful skill sewing can be. Thanks for reading.
Posted by liza jane at 1:58 PM

Email ThisBlogThis!Share to TwitterShare to FacebookShare to Pinterest
Labels: sewing, the tipi