I Made A Dress

Yep.  A dress.
I feel like it's about time I actually made a wearable dress.  It's been a while.  I seem to make separates most of the time.  Surprisingly, the majority of my pattern collection is dresses even though I rarely wear them.  I like wearing dresses.  I just don't own many that I would wear on an everyday basis.  That may be something I need to remedy.

Anyhoo, this is the Lisette Passport dress that has been popping up everywhere lately, Simplicity 2209.  It's been languishing in my sewing room for two months now waiting on a hem.  A hem! (Ahem-- funny)  I made it up for a wedding back at the beginning of April but had no time to finish.  I decided it was due time this past week. 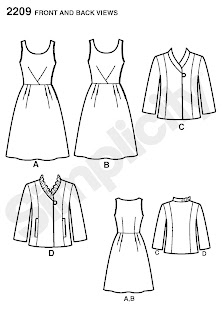 I was pleased with the pattern.  Fit well right out of the envelope.  So little fabric used.  That's nice compared to some patterns that seem to just eat it up.  The crossover dart is my favorite detail even though my fabric is too busy to see it.  I used a Kaffe Fassett rayon challis print.  I'm in love with the print.  I ordered the fabric a while back on a whim, not really sure what it was going to look like in person.  The colors are vivid and warm.  I tend to like a lot of the color combinations I see in his prints.  They are striking and unusual.   I was also interested in working with rayon challis.  I love the drape but I'm not sure it was the best fabric for this dress pattern.

I decided to skip the facings and line the whole dress.  I fumbled my way through lining the sleeveless bodice.  I had it all worked out in my head but got lost during the process of lining it.  I ended up lining the front and back separately leaving the shoulder seams free.  Then, I sewed the shell fabric shoulder seams and slip stitched the lining shoulder seams together.  Since then, I found stitchywitch's tutorial for lining a sleeveless dress.  I'll have to try it out next time.

The zipper gave me a fit.  I tried my first ever invisible zipper and it was... um, visible.  Very visible.  I tried again.  Still visible.  So I ripped it all out and put in a regular dress zip by hand, which is also visible but that doesn't bother me as much as one that's supposed to be invisible.   I'll put one in right one day.  I think putting a zipper in a side seam is much more cumbersome than one in the back.

The only negative is the way the rayon pools a bit at the waist.  At first I thought it was because the lining was a bit short or that I stitched it a bit too short.  But after unpicking and sewing the lining at the waist seam three different times, the fabric still pools there.  I think it may just be because of the fabric I chose.   I don't think it would happen with a crisp cotton.  It doesn't bother much, though.
All in all, this is a nice and easy summer dress.  I think I'd like to try it in a cotton print, maybe two different prints like on the envelope cover.  Now I just need an occasion to wear it...