The High and Wide 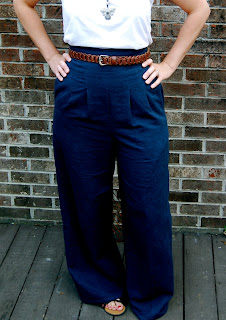 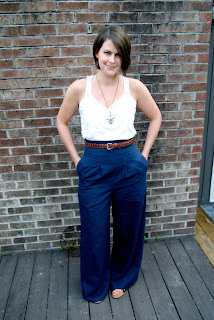 Making these pants was a very long journey, even though the actual sewing part was quick and easy. I saw The Kate Jeans by stitchywitch on Burdastyle back in March and fell in love with them. I had been looking around for a high waist pants pattern, but was unsure about how they would look on my hips or just my size in general. I am a size larger on the bottom than on the top. I followed the link to her blog and read all about them. (This was also my first introduction to sewing blogs, so thanks! I've enjoyed snooping around ever since.) I was inspired. I went out the same day and bought the pattern (sale at Hancock, I never buy a pattern at full price) and some navy linen. I think I may have even cut out the pieces that night or the next day. Then, I chickened out. I became convinced that they weren't going to work for me. I think I read some of the comments about how they were flattering on people who are in shape. So, I put the pattern pieces in a stack of things cut out but not made. Am I the only one who does that? I cut things out fairly often and then move on to something else before I've sewn it.

I actually forgot about it for a long time. My husband and I moved in to a new house and so all the sewing stuff was packed up in boxes for two months. Then when we unpacked, I found them and decided to just go ahead and sew them up, whether they looked good on me or not. 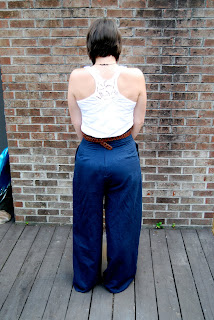 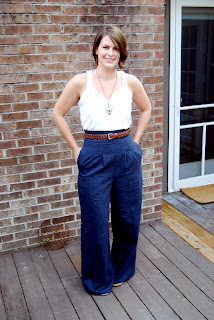 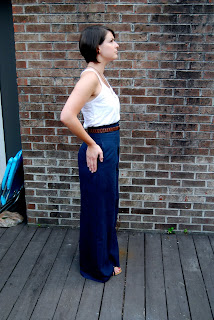 I was blown away. First, they were super easy to sew. It may have taken me two hours all together, and I had to change the zipper at one point. Second, they fit without a single alteration. I laughed a little when I read that on stitchywitch's blog because I always have to alter things, but they really did fit. I have a 27.5" waist and 40" hips. I cut a 14 but went to a 12 in the waist and I think I made my darts a little deeper than on the pattern pieces. They are tight in the waist, but I that is what makes them so flattering. The are comfortable to sit in, too, though the linen seemed to stretch out a little after wearing them all night. I'm not sure what I can do about that. And the funny thing is that they don't seem as high waisted in my pictures as they feel when I 'm wearing them. I guess I'm not used to wearing pants like this. My only negative is that there was not enough length for me to hem them to wear with heels. I just barely hemmed them and I'm wearing them with flats. I like the way they hit the ground, but there's not enough there for any kind of heel. I'm kind of tall, though- 5"9". If you are taller, definitely add length.
I wore them to a friend's birthday party last weekend and they made me feel like a million bucks. I like the pattern because it is vintage without be overly vintage, if you know what I mean. I showed them to my mom thinking they were sort of 1940's, but she said she wore pants like this in the 70's with a cropped aviator type jacket. They are definitely from an past era. I felt that they were extremely flattering. The wide leg is what makes them so great. I just wish now I had made them three months ago so I could have been wearing them the whole time! I would definitely make this pattern again. And thanks, stitchywitch for introducing me to the pattern. I would have overlooked if not for your version. 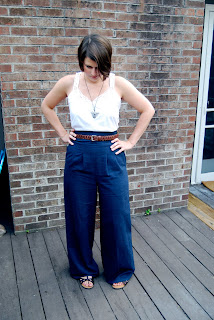 I also made my necklace. Nothing too special, just a cool pendant from Michael's and a flower bead I had on a piece of leather. It was supposed to be a girly, from the garden, vintage sort of necklace. I thought it was great until my husband said it reminded him of Silence of the Lambs. Oh well. 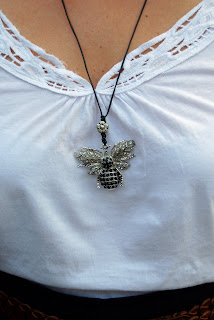