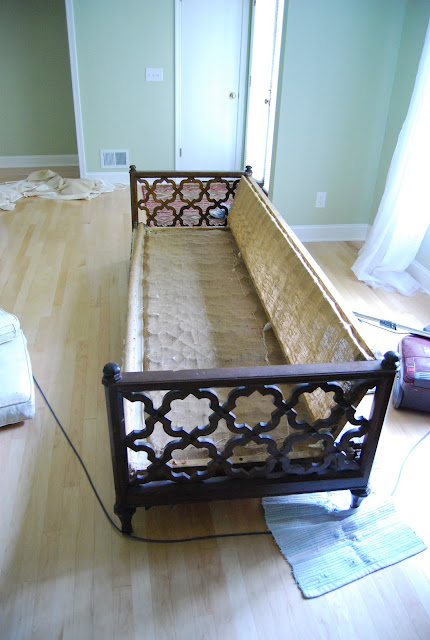 Some headway is being made on the sofa.  J and I have removed not one, but two layers of old upholstery and batting.  Apparently the white brocade was a re-upholstery job done right over the top of the old upholstery.  Strange, no?  It's really not that difficult to remove it.  Now putting it back on may be another story... 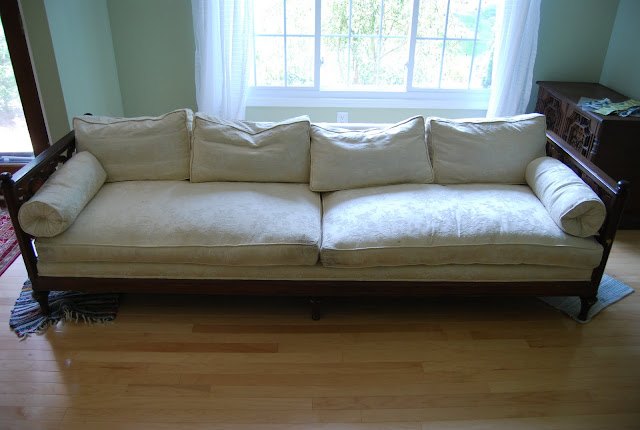 Here's a before shot. 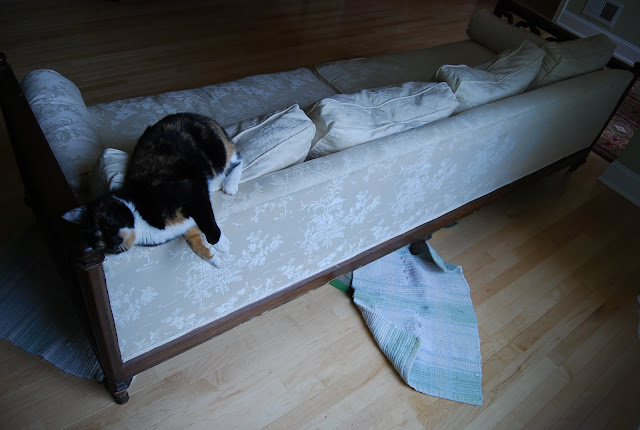 This little monster on the end of the sofa will show up in many of these pictures.  She literally cannot stand it when something new is going on in the house and has to be involved.  It's hilarious and also really annoying.  You know what they say about curiosity and cats. 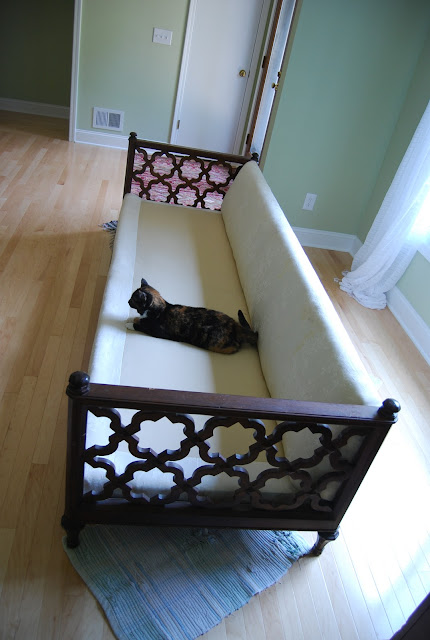 I'm not too concerned about sewing the cushions other than dealing with pattern matching issues.  They're just simple box cushions.  It's the frame of the couch that I'm most worried about.  We spent a lot of time measuring and documenting how it was put together as we took it apart.   And took lots of photos as we took everything off. 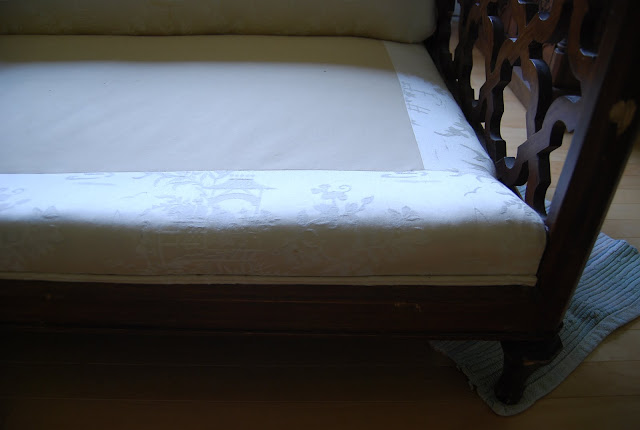 Double welt at the bottom.  Do I piece the bottom panel like this?  Or just use one length of fabric?  I guess piecing would save some yardage.  Upholstery fabric is expensive. 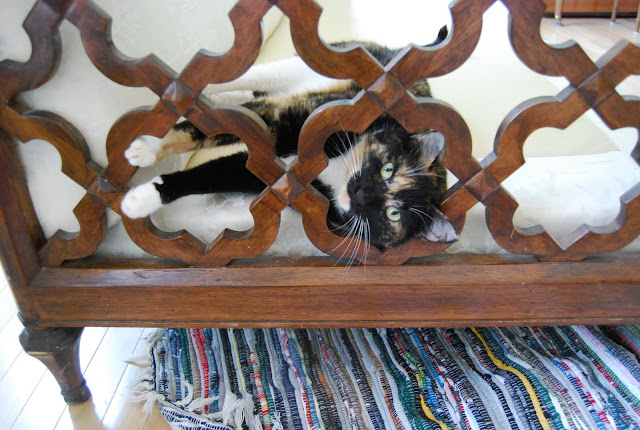 She's an expert at being cute.  Especially when also being bad. 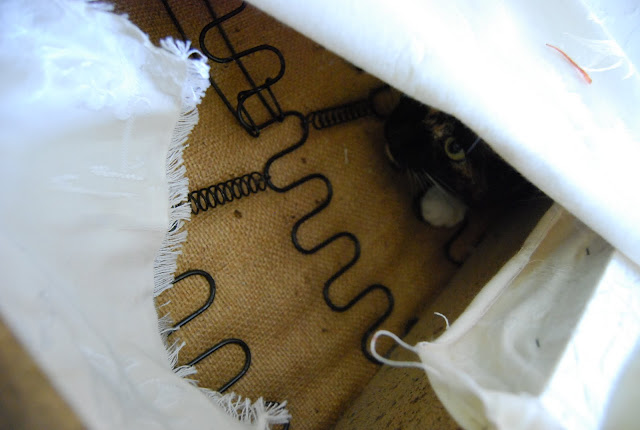 We walked away for a moment and returned only to find her inside of the sofa when we took off the back panel. 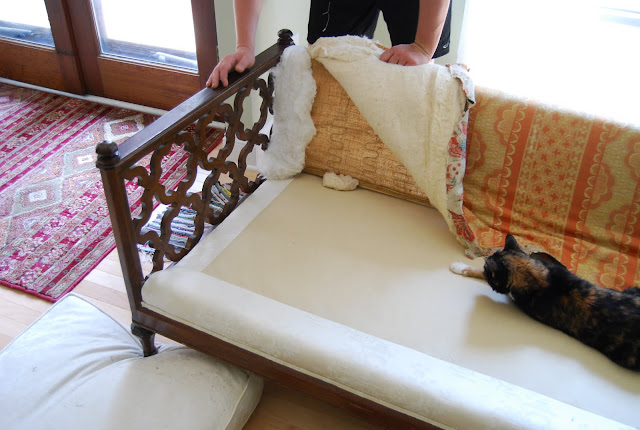 Check out the old upholstery.  An orange and yellow jacquard of some sort.   My best guess for year is 1962.
The frame seems to be solid pine.  Solid and heavy.  J is going to repair the wood and glaze it to match the original dark brown stain.  We haven't bought the fabric yet, but we are 99% percent sure we've picked it out-- at twenty-two dollars a yard.   Suddenly, the twenty-seven dollar sofa becomes much more costly.
But it's worth it. 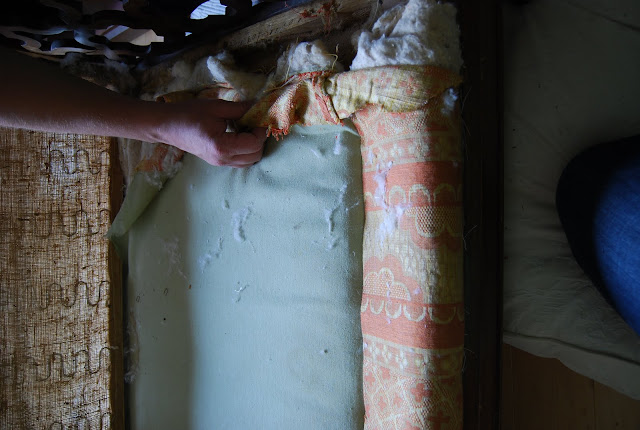 As we were peeling back the layers, a story was forming in my head about who used to own this sofa.  This was Milton and Geraldine's sofa.  They bought it brand new in 1962.  It was super chic and fancy then.  Fit right in to their mid-century modern home.  I can see the brass star burst clock hanging on the wall covered in lattice wallpaper.  Years later, Milton and Geraldine decided to reupholster their sofa in a nice white brocade when they retired to Florida.  Hehe... 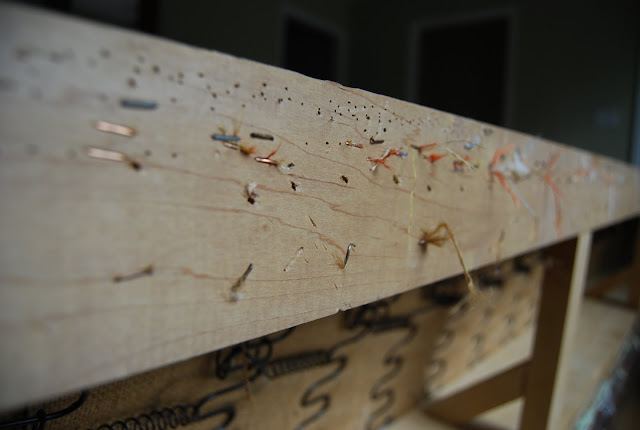 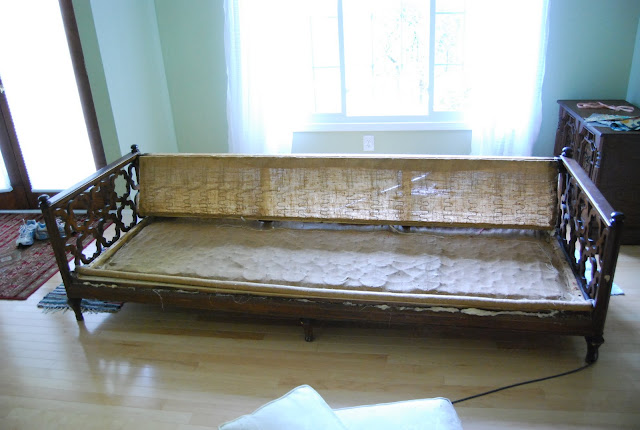 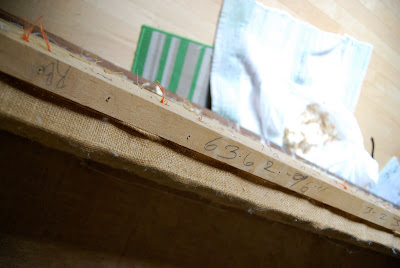 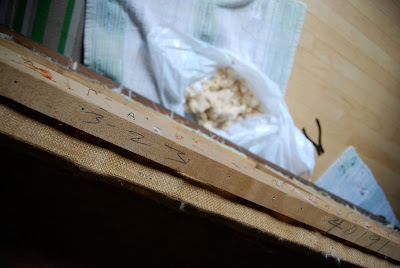