I signed up for Marigold's Summer of No Pants over at Hideous! Dreadful! Stinky! a few weeks ago with full intention of playing along and completing one skirt a week leading up to the first day of summer.  I like the idea of a summer with 'no pants' because it gets so stinkin' hot here in the summer months that it is impossible to wear jeans, or any sort of trousers unless they are made from linen.  I thought this would be a nice way to beef up my summer skirt collection.

Well, life got in the way and I didn't play along until now.  But now that I am out of school for the summer (yes, I'm gloating just a little ;) I'm going to try and make my four skirts before the end of next week.  Here's the first.

I know it doesn't look special, but this skirt is self-drafted.   I feel fancy just typing that.  I mentioned in the last post that I was using Aldrich's Metric Pattern Cutting for Children's Wear to work on a pattern for a baby item, but I also decided to have a go at drafting something for myself.  This time I used Cal Patch's Design-It-Yourself Clothes.
This book presents pattern drafting for a few simple blocks- the a-line skirt, a knit top, a woven shirt, pants and others- and then tells you how to modify your existing block to make all sorts of variations.  I like that the information is presented in such a way that if you are a complete pattern drafting beginner, like myself, you can make a successful first self-drafted project.  I still want to order Winifred Aldrich's Metric Pattern Cutting for Womenswear for more options, but this book is a good starting point for newbies. 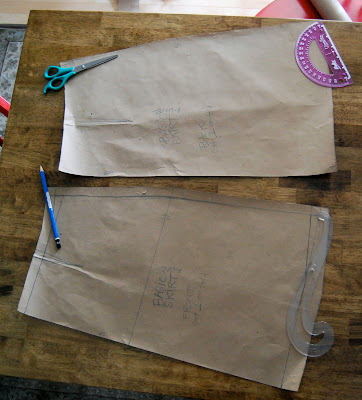 I obviously started with the basic a-line skirt.  I've lived an entire life of wearing skirts that don't exactly fit right.  Either too tight across the hips or gaping at the waist.  Time to make a simple skirt that fits properly, don't you think?
I think the chapter in the book that deals with taking your own measurements is the most invaluable.   I gave myself a pep talk in the mirror (your measurements ain't nothin' but a number, LJ) and put vanity aside when I took my hip measurement.   Hip measurement in the book is defined as your widest part, which may be lower than you think.  Yes, let's just say my widest part is a bit lower than I thought.  I blame gravity.  And my general laziness when it comes to working out.  I also took my waist measurement by where I actually wanted the waistline of my skirt to sit.  I often note my waist measurement by my natural waist, but generally don't wear things at my natural waist.  The other measurement that was key was the waist-to-hip measurement, which I did with two tape measures.

Not sure what this look is all about.
The result, my friends, is a pretty darn awesome-fitting skirt, if I do say so myself.  I was really pleased with myself.  I told my husband that I thought it was pretty amazing that I made up a pattern and sewed an a-line skirt for myself in one day.  To which he replied, modest, aren't we?
Hehe. I guess I was just excited that it was all my own.  It's kind of a liberating feeling.  It's fun to finally wear a skirt that fits in the waist and has some ease through the hips.  It's the little things that excite me :)

The blue fabric is actually my original muslin for the skirt pattern.  The only tweak I made after sewing up the muslin was to widen the front darts by 1/4".  It made the front fit better at the waist.  And it brought up the hemline in the front some which usually tends to droop a bit lower than the back hem.  Why is that?  Do I need more length on the back piece?  More width for booty?  I should do a little research to figure that one out.
I used the original muslin as a sort of underlining for the finished skirt.  I used quilting cotton, too.  I know that's a no-no most of the time but I don't have a problem with using quilting cotton for a simple summer skirt.  The blue fabric gave it a bit more bulk and stiffness than just a single layer of cotton.  I also used a grosgrain ribbon as a waist facing to stabilize the waistline.  The whole thing feels a bit more substantial than an average quilting cotton skirt.  I, once again, failed at the invisible zipper step and put in a regular exposed teeth zip.  I will put one in right soon.  I'm determined.