Fun With Resin a.k.a. The Art of Procrastination 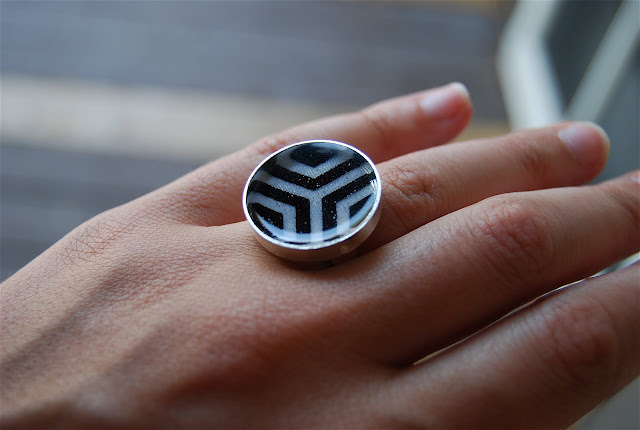 So, what I should be doing and what I am doing are two very different things right now.   School starts back this week for teachers, next week for kids.  I should be lesson planning and preparing for the school year.
But instead, I'm playing with polymer resin and fabric and making jewelry.
I'm a master-of-avoidance when I really put my mind to it. 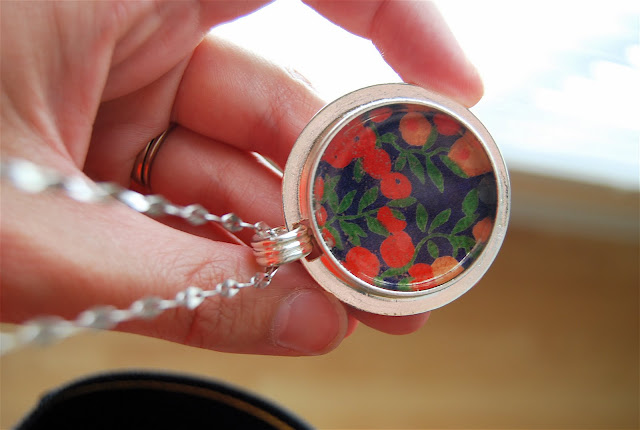 I spy Liberty!
I'm tickled with how the simple, empty bezel pieces turned out.  Some of the other things I tried did not turn out so well.  I thought I'd share the process and also the what-not-to-do if you are interested in trying a small polymer resin project.   I'm tagging this as a tutorial but it's really just a hey, this is what I did. 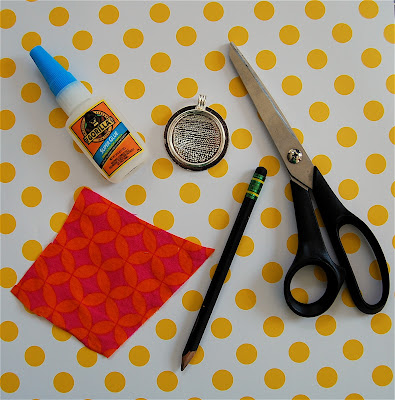 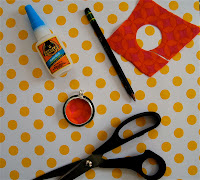 Self-explanatory step one. Cut out fabric and glue inside of empty bezel.  I found these ring and pendant bezels at Hobby Lobby.  That was when I originally thought about using the polymer resin.  I spent a lot of time picking out the little scraps of fabric I used.  You have to look at your fabric in a whole different light since you only see a small portion of the pattern.  I thought the Liberty worked really well since it's such a small scale print.  This is the same Liberty from that thrifted dress I found a while back.
In the photo below, you can see some of the other things I tried that didn't work so well.  I tried a couple of flat pendants- one has the black and white fabric and one has the miniature spool of thread and buttons.  I also put several mini spools of thread in to an oval bezel.  I was most pleased with the pieces where the bezel was filled with the resin.   The fabric becomes magnified, like it's floating in water.  I knew the three-dimensional pieces wouldn't have that same "floating" effect because they wouldn't totally be covered with the resin.  But I thought I'd test it out anyway. 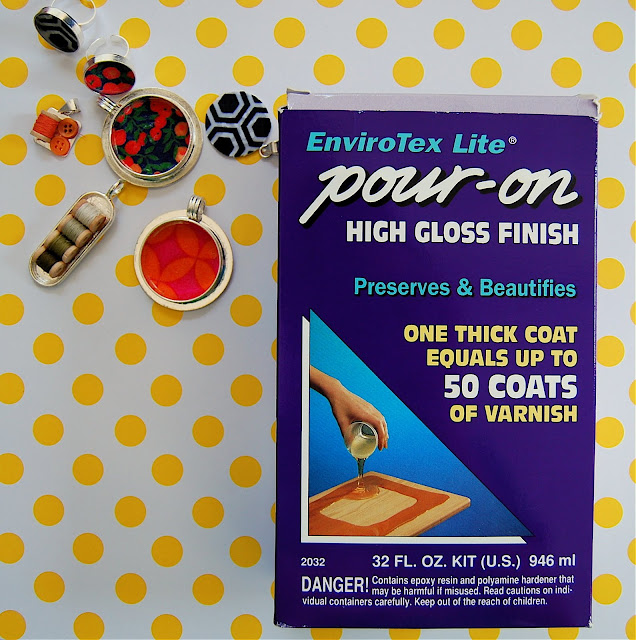 Now here's my free advertisement for EnviroTex Lite. It's pretty neat stuff.  It's a clear liquid plastic that hardens to create a thick, glassy surface.  You can put it on anything.  I first used it a couple of years ago for an art lesson I taught.  I was apprehensive about it at first but it was so easy to use.  No need to be wary of it.  You can find it at craft stores.  Read the directions and follow all the instructions for mixing.  Mix and pour outside.  My two cents is that you only need to mix a teeny-tiny little bit for small projects like this.  This is actually the same stuff I used a couple of years ago.  The leftovers have been sitting under my kitchen sink ever since.  There are other resin products out there but this is the only one I've tried. 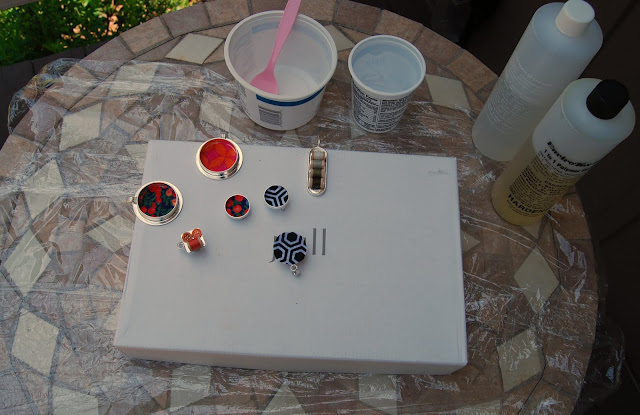 This was my set up.  I used a shoe box top so the loop at the top of the pendants could dangle over the side and they could sit flat.  I cut holes in the box top for the rings to sit in.  And I propped the flat pieces up (on those little spools) so the resin would flow off the sides. 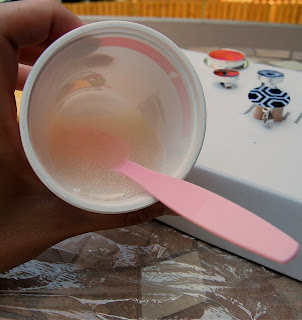 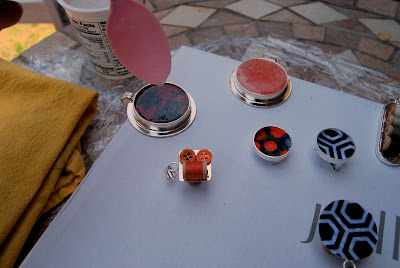 Mix, mix, mix.  Mixing properly will make sure it hardens the way it is supposed to.  There will be lots of bubbles.   I poured the resin outside in 90-something degree weather and I had about thirty minutes before it set up.  During that thirty minutes I popped the bubbles that floated to the surface by breathing very gently on them.  Really stubborn bubbles I popped with a sewing needle.  I didn't get all the bubbles out, but nearly.  I'm sure with a little more finesse I could get them all, though.  In about four hours it was hard to the touch but I think it's at least twenty-four hours until it's totally cured. 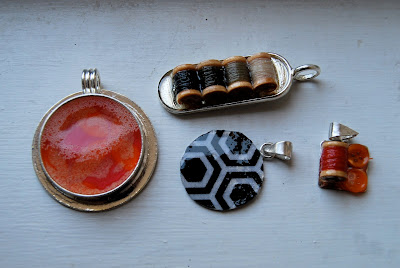 Here are the fails.  The pink and orange pendant should have been a good one.  But the glue was still wet when I poured the resin.  The others had been glued the night before but I did this one so I could take a photo right before I poured the resin.  It created a filmy white residue on the fabric.  I quit trying to pop the bubbles when I realized it wasn't going to work.  The spools of thread are too three-dimensional.   You can add several layers of this stuff (letting it dry eight hours in between), but who has the patience for that.  The flat one would have been nice except I put my finger in it after it had set up and messed it up.  But the other two rings and pendant came out well. 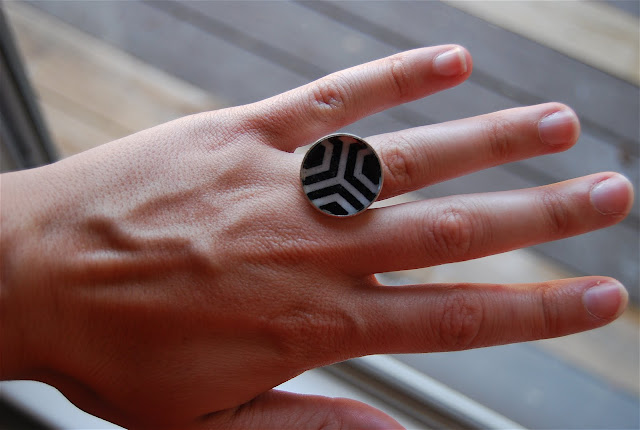 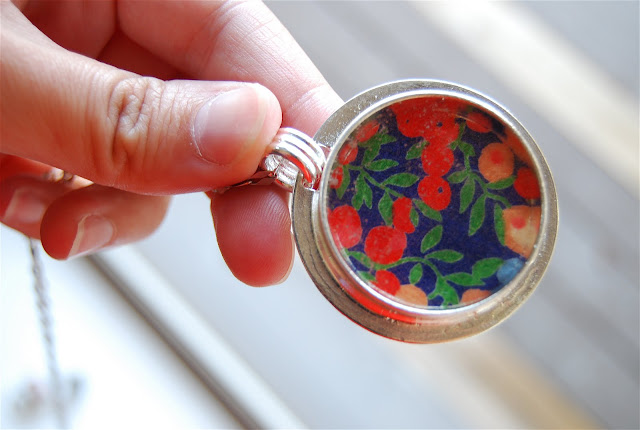 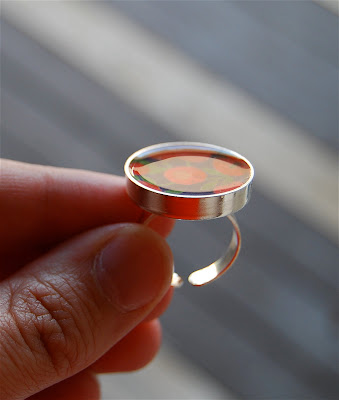 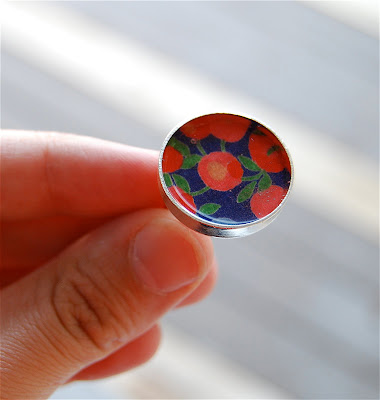 And there it is.
Jewelry for the fabric lover.
It would be fun to put little trinkets in that aren't taller than the bezel.  You could put anything in the bezel.  I'm going to use this resin for an art project this school year where the kids are going to paint miniatures (so, see? this is lesson planning).   I've seen some cool tutorials for making resin jewelry using silicone ice cube trays around the Internet, too.   Apparently when it hardens it just pops right out.   I'll have to try that out. 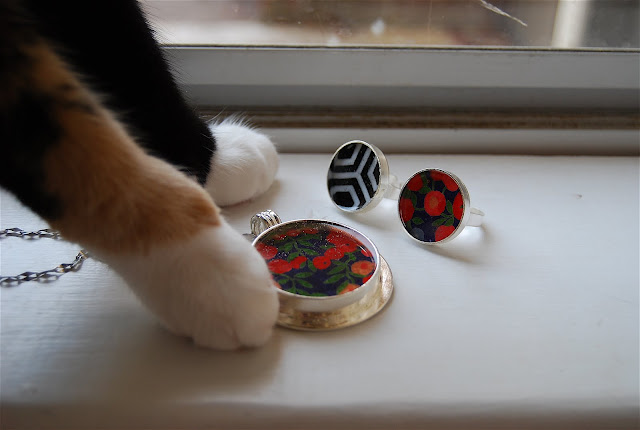 Hard to resist those mismatched paws... even when they mess up my photo op.
Posted by liza jane at 1:00 AM