Don't Be a Lion's Lunch

I think the Once Upon a Thread series that Katy puts on over at No Big Dill is my absolute favorite blog series around.  It combines so many things I love-- children's books, artwork and illustration, and sewing, of course.  Anyway, I decided to play along again for chapter three.  Though this time around, I tried something completely new to me. 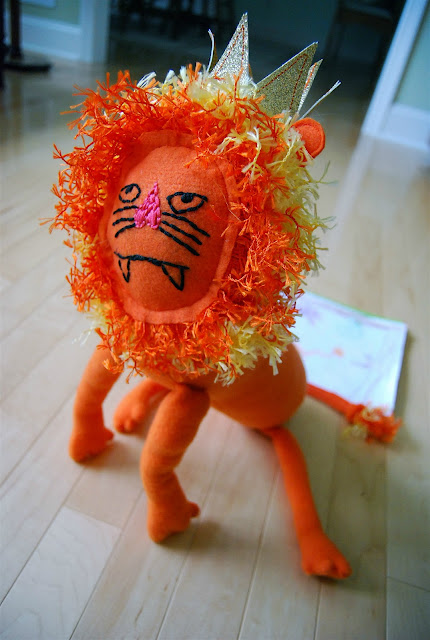 I made a softie.

Softie, stuffie, plushie, stuffed animal- whatever you call it.

And this softie is 3-D, which I'll explain more about later.  I know my lion is a little block-like.  He's not the most sophisticated softie in the world.  In fact, he's pretty ridiculous.   But I'm awfully proud of how he came about. 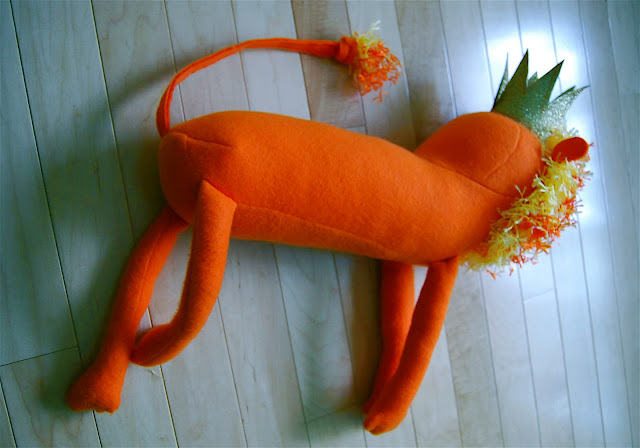 But first let me talk about how this all started. 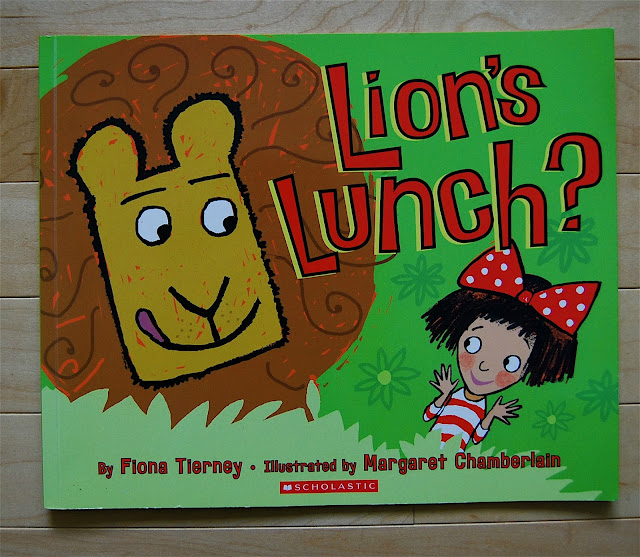 I read Lion's Lunch? by Fiona Tierney to one of my first grade classes the other day.  I collect any sort of kid's book that has to do with art or drawing or anything like that.

The story starts when Sarah wanders in to the jungle where she is accosted by an angry, grumpy lion. 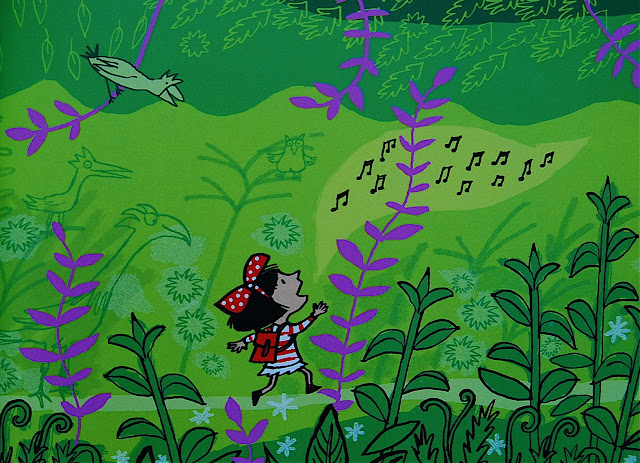 Lion is upset that Sarah is walking and singing in his jungle and tells Sarah he is going to eat her for lunch.

Sarah pleads with lion not to eat her.  She strikes a deal with lion that if she can do something no one else in the jungle can do, she can stay (and not be a lion's lunch). 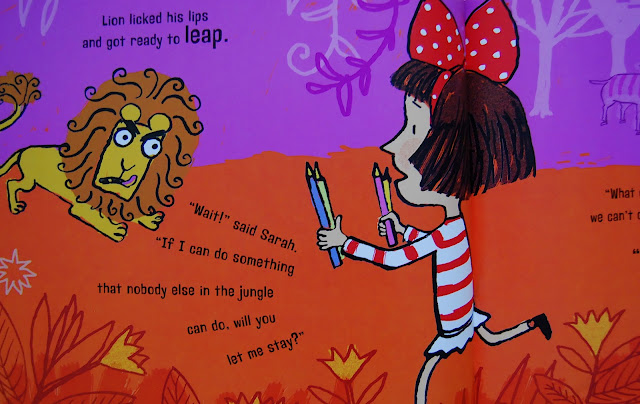 What can Sarah do that no one else in the jungle can do?  Sarah can draw.  She draws all the animals in the jungle.  And she draws lion.  But lion doesn't like what he sees....

You'll have to read it to find out what happens in the end.  It's a cute story with very cute jungle animal illustrations.  And Sarah draws and saves the day, which I like.  After I read the book, one of my first grade friends was inspired to draw some jungle animals just like Sarah.  She drew this picture and gave it to me. 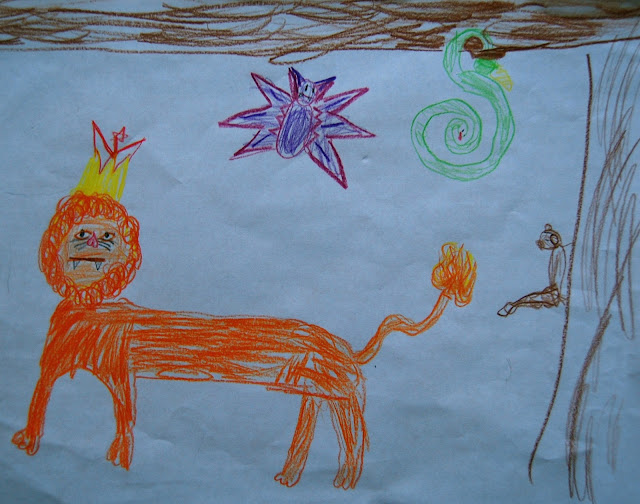 It is the most awesome lion I have ever seen.  You can totally tell that he's a grumpy lion, can't you? That expression.  The upside-down-heart nose.  I absolutely, positively LOVE kid's drawings.  I know I'm in the right profession, being an art teacher.  Kid's drawings have so much personality and style. They are totally fearless when it comes to art, something we adults should take note of.

Also part of the inspiration of this lion was the discovery of artist Wendy Tsao via this article.  Tsao turns kid's drawings in to one of kind stuffed animals.  Her blog is definitely worth a look.  Such a genius idea.  I bet her waiting list is insane.  So between the book Lion's Lunch?, Once Upon a Thread, the drawing and the idea of turning kid's drawings in to softies..... 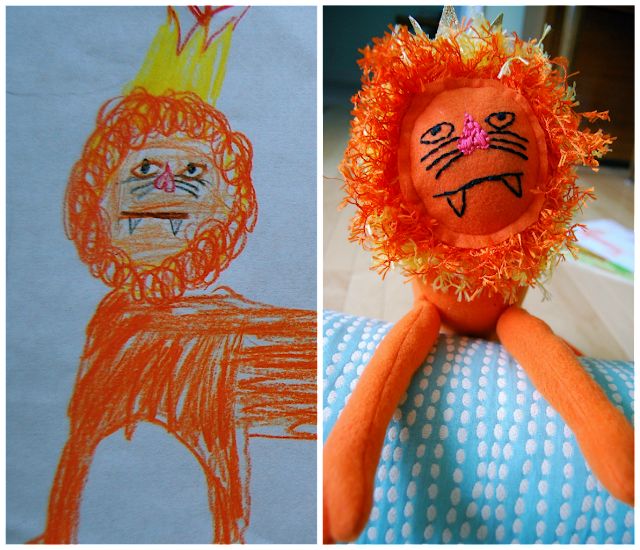 I giggled the entire time I was making this.  Seriously.  It was so much fun.

At first I thought I'd make the lion more two dimensional by cutting out a front and back just like the drawing and stitching it up.  Then I decided I wanted to be fancy.  I wanted to make it three dimensional.   But I was stumped on how to come up with a pattern.  Are you ready for how I did this?  I'm pretty stoked that it worked.  It was just kind of brought forth from playing around.  I wasn't too sure it would work out in the beginning. 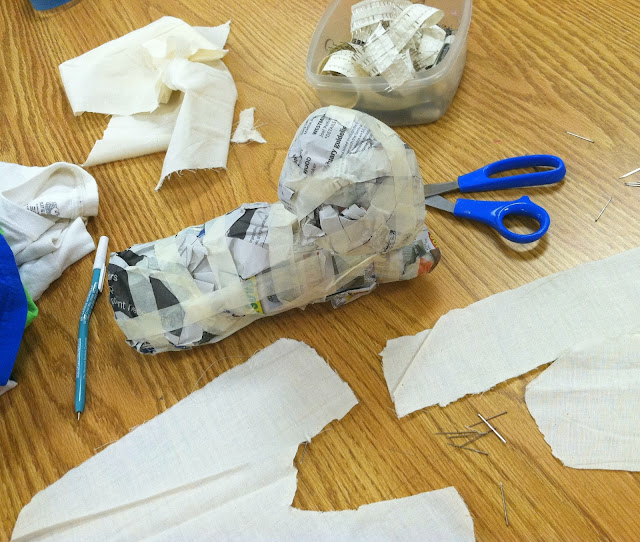 I made a very rough body and head shape out of newspaper and tape.  We were just finishing up a paper mache project where we did just this to build an armature.  Then I used muslin and straight pins and I cut the pattern pieces by draping and pinning the muslin on my balled up newspaper body.  See those scraggly looking pieces of muslin in the photo?  They are the basic shapes.  I refined and traced them out on paper, then used my paper pattern to cut the orange fleece.  I made the body in two pieces so I would have seams to sew the legs and tail in to.  I crossed my fingers and stitched it together. 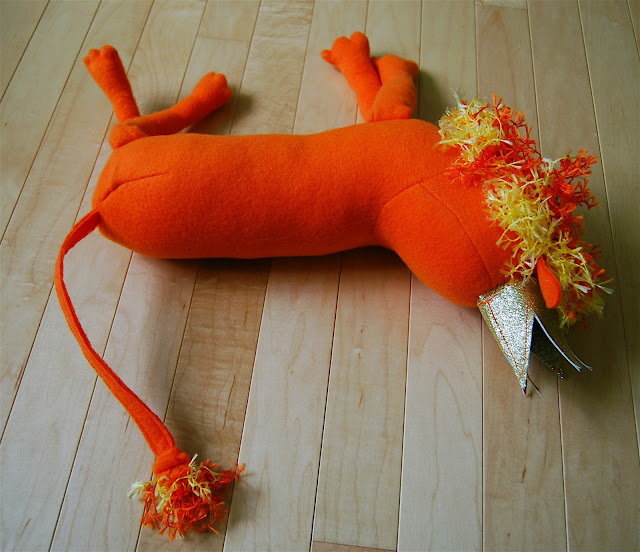 You can see the seams pretty well in the photo above.   Now I know that my lion is pretty, um, square.  He kind of has a block head.  But I'm so pleased that working with a 3-d form to make the pattern worked.  This is backwards from the way I'd normally create a pattern.   And my experiences are pretty limited, mind you.  Anyway, the possibilities are endless. 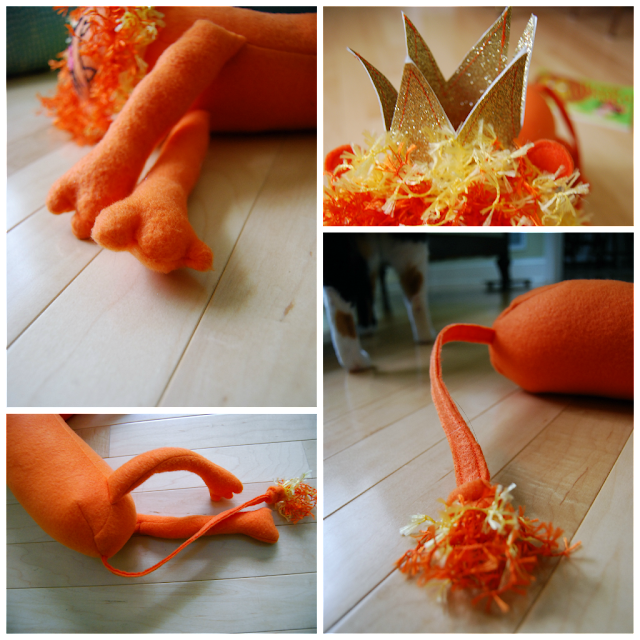 This lion is made from fleece.  Fleece is very stretchy and forgiving, good for making softies.  His face is actually felt.  I embroidered his features.  I found some crazy fluffy trim in the home decor section for his mane.  His crown is a glittery vinyl I found at a craft store.  It's sewn on by hand.  Otherwise he's all machine stitched except for a little hole at his neck I slip stitched after he was stuffed.  I used a poly-fill stuffing.  Isn't he great?  He's going to live on my bookshelf at school.  He'll probably help read Lion's Lunch? to my first graders next year. 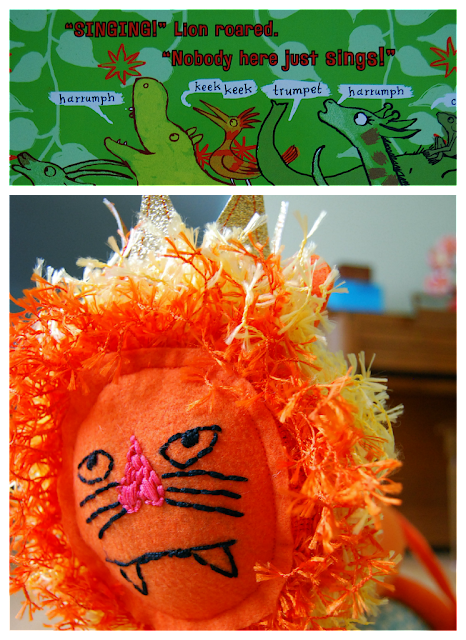 Guess who else likes him? 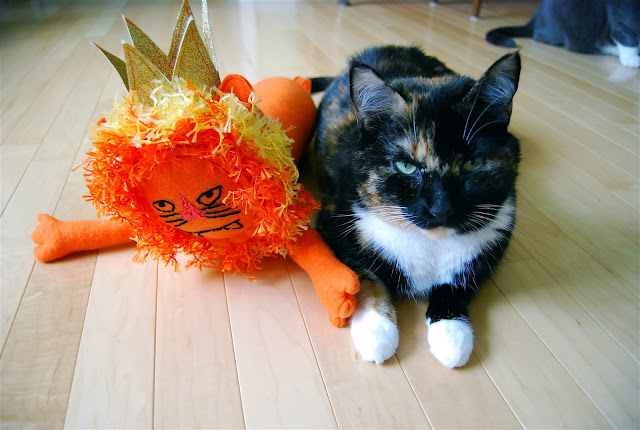 That is the same grumpy expression, is it not? 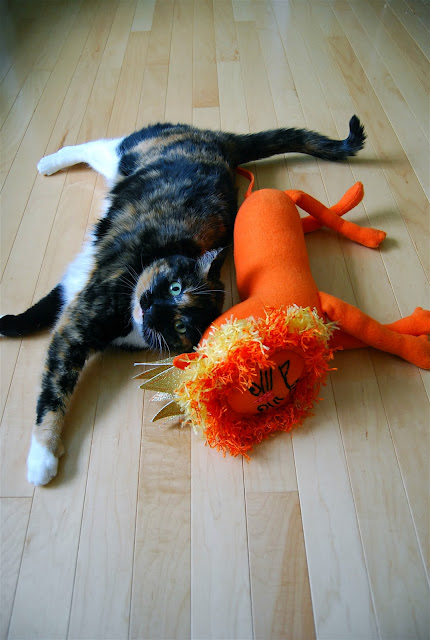 Thanks Katy, for your ingenious series!  I enjoy seeing what every one comes up with and discovering new books.  So inspiring.

Email ThisBlogThis!Share to TwitterShare to FacebookShare to Pinterest
Labels: art, art education, inspired by kid art, once upon a thread, sewing, softie