I decided to give Zoe's bustier line t-shirt tutorial a go.  I wear my knit tops often so I thought it would be nice to add a few more.   I pulled out my TNT Burda 2-2011 long sleeve tee pattern.  I made my first knit tee from that pattern and it was perfect.  I don't think I've ever tried any other tee shirt pattern for reference but this one meets my wants-and-needs for a knit tee.  Is there any reason to look for another?  I did initially lengthen the pattern three inches through the waist and chopped the sleeves off just above the elbow.  I like the length of the sleeve.  Kind of in-between.

Now, I made up the black lace version first.  I traced my pattern pieces and free-handed the subtle sweetheart shape.  I cut the pieces at the sweetheart neckline and just added seam allowances when I cut from the fabric.  The lace is a stretch lace I've had in my stash for ages.  I have lots more of it, too. (What to make with it?)  The knit is actually a double knit, so there's a little more structure to the top.
Anyway, I sewed it up carefully.  I pressed seam allowances and top stitched to keep in place. I just baby hemmed the neck and sleeves.  I think that worked because the lace is pretty substantial.  Not a lot of open weave.  Didn't try it on once until I was totally finished.
It is tight.  Really tight.
I have, ahem, gained a few this summer but I was quite taken aback by how tight this top is.   I couldn't have gained that much. I decided it was the knits' fault.  Double knits have a tighter weave and therefore are more snug, more recovery....  That was my logic. 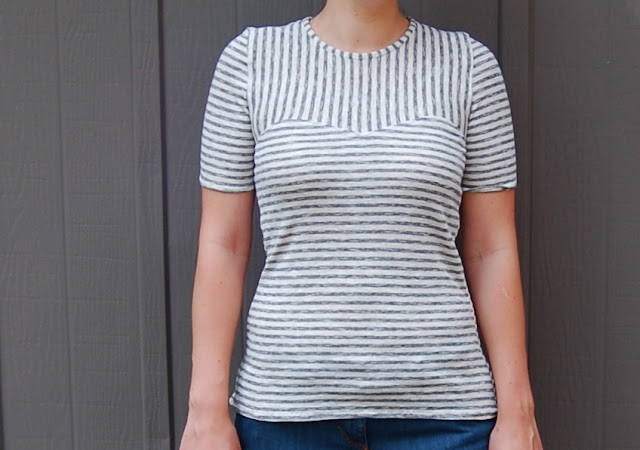 So I decided to make another version from a loose, drape-y t-shirt knit.  Not as tight as the black version, but still- um, clingy.  Still smaller than I imagined it would be.

I was starting to feel really bad about myself. 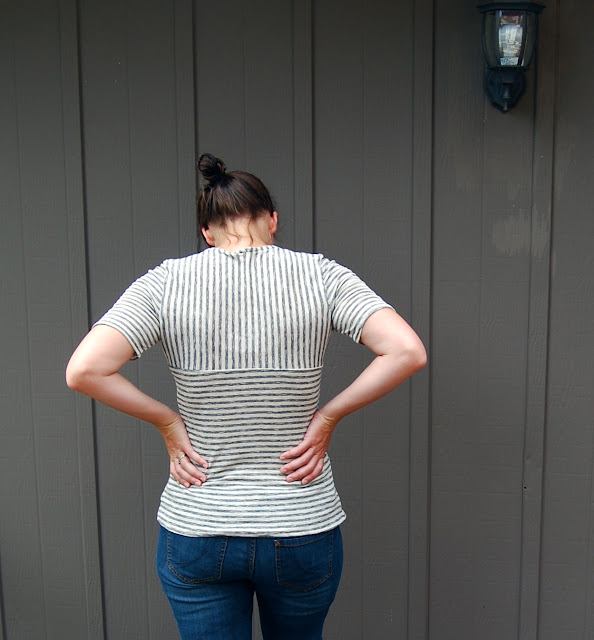 Then, in a moment of clarity while taking these pictures, I remembered.

Burda patterns don't include seam allowances!
Ha ha.
I made both of these tops without any seam allowances (except where I added them at the bustier line).
Hence the title-- I'm a knitwit.
They are still wearable and I'm sure I'll still get plenty of use from both.  But there is less ease than I'm generally comfortable with.  If I wear something with a higher waist, like the turquoise skirt, they both look fine.  In the future, I think I'll add seam allowances when I trace Burda patterns.  Or write nett pattern really large on the pieces (learned that from Metric Pattern Cutting).
No need to be so hard on myself :)