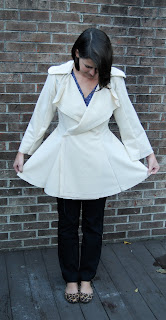 Finally! Some progress on my Lady Grey muslin. Work seems to be getting in the way of my sewing time lately....;)

When I first read Gertie's post about making the muslin using Susan Khalje's method, I brushed it aside. I thought there was no way I was going to do all that prep. Waaaay too much work. But then I realized that the point of doing a sew along is to learn new things. So I did it all just the way Gertie explained. And you know what? I did learn a lot- already. I've learned to trace patterns and markings accurately, learned how to sew princess seams correctly and I've learned about all sorts of sewing tools I never knew about. Tailor's ham, anyone? I'm so excited about that! 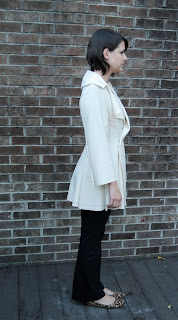 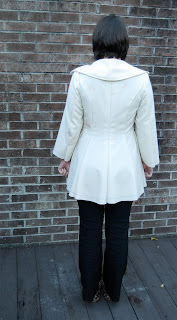 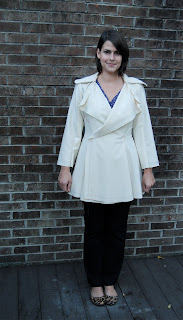 I'm embarrassed to say that I've never actually made a muslin before, for anything I've sewn-- ever. I've made some garments that I intended to be a practice garment, but then I've always decided afterward not to make another one. This is all a new experience for me. Here is what I've done so far,

1. I decided against tracing my pattern and just when ahead and cut it. I know opinions are mixed about that but I couldn't justify adding in another step. I cut a 6 at the bust and waist and an graded to an 8 at the hip.
2. I drew seam lines on my paper pattern. I started using a sewing gauge to mark the seam line but then I found that cutting a small piece of cardstock to 5/8" and using that as my gauge was much easier.
3. I traced my seam lines and markings on to my muslin fabric (with my new handy tracing wheel) and then used another cardstock "gauge" to make a 1" seam allowance and cut out all the pieces.
4. I thread traced all of my seam lines using a small stitch which seemed to take forever. Good practice for actually stitching where you mean to, though.
5. And finally I basted everything together. Gertie's princess seam tutorial was very helpful.
Here are some pictures to prove that I actually did it all. (I'm so proud!) 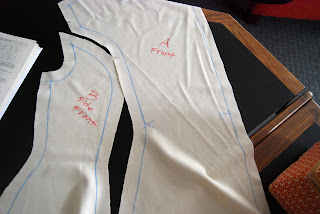 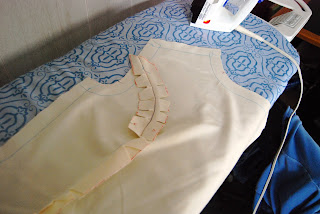 And in the end, after all that, I put it on aaaannnd..... it fits. Fits pretty well actually. I only have one issue which I'm hoping someone out there in blogland can help me with. The armholes feel too small. They are okay with a tight top on underneath but I'd like to be able to wear something bulkier under it if I want. What is the easiest way to put a little more room under the arms? I feel like the bottom arm seam is a smidge too high. I can make the curve a little deeper for more room, but then I'm not sure how to make that change on the actual sleeve as well. Any suggestions are greatly appreciated! And if anyone sees any other changes I should make, I'd love to hear. 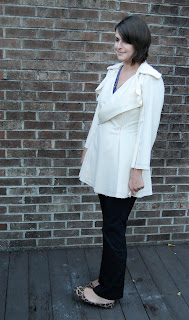 I'm really happy with the end look of Lady Grey. I love the peplum. It's so feminine. This is something completely different from anything else I have in my wardrobe and I'm excited about making up the final version. I'm making it in a bright red wool flannel twill and a mint green *gasp* silk twill lining. I'm nervous about the silk- it's already fraying just sitting on my table. Thanks for the sew along, Gertie! I'm enjoying it and learning so much. 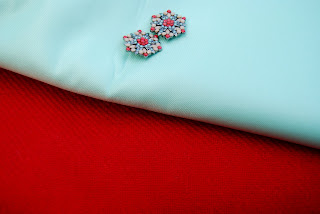