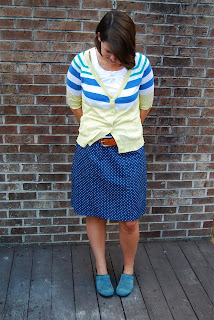 I made this skirt a while back but I just rediscovered it in my ironing basket. (There are lots of things in there that I haven't seen for a while) I thought I'd post about it since I did some major changes to a McCall's a-line skirt pattern to make it. That and I don't have anything new to write about since all of my sewing time has been devoted to making my Lady Grey muslin :) It's almost finished. 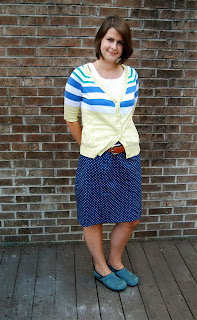 I actually ended up making my own paper pattern before I made this skirt. This was my novice attempt at altering a pattern. The first thing I did was divide the front and back pieces in to three pieces to make a pseudo princess seam. I even remembered to add back in the seam allowances for each piece. It ended up being too big around to the top of the skirt and looking back on it now, I should have traced the curve from the side seams when I divided the skirt in to three pieces. I just drew a straight line. I didn't change the facing. I just banked on the fact that if I measured right, the facing would fit and it did. I added two contrasting gussets at the back which is my favorite part. I got the idea from a Burda skirt pattern, but I can't seem to find which one now. All in all I really like the result. I've worn it several times already since rediscovery. I may just have to pull out my altered paper pattern, make a few changes and try another one. 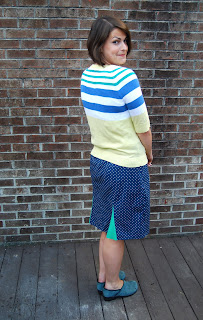 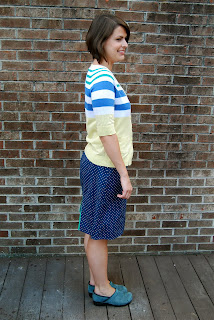